The second conference we come to in our alphabetized recap of 2019 is the ACC. Here are the ACC standings. 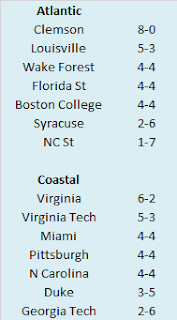 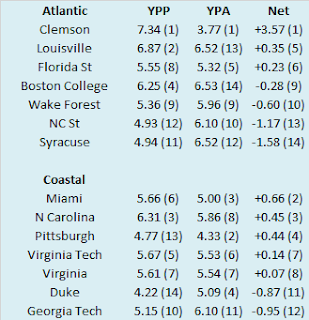 College football teams play either eight or nine conference games. Consequently, their record in such a small sample may not be indicative of their quality of play. A few fortuitous bounces here or there can be the difference between another ho-hum campaign or a special season. Randomness and other factors outside of our perception play a role in determining the standings. It would be fantastic if college football teams played 100 or even 1000 games. Then we could have a better idea about which teams were really the best. Alas, players would miss too much class time, their bodies would be battered beyond recognition, and I would never leave the couch. As it is, we have to make do with the handful of games teams do play. In those games, we can learn a lot from a team’s YPP. Since 2005, I have collected YPP data for every conference. I use conference games only because teams play such divergent non-conference schedules and the teams within a conference tend to be of similar quality. By running a regression analysis between a team’s Net YPP (the difference between their Yards Per Play and Yards Per Play Allowed) and their conference winning percentage, we can see if Net YPP is a decent predictor of a team’s record. Spoiler alert. It is. For the statistically inclined, the correlation coefficient between a team’s Net YPP in conference play and their conference record is around .66. Since Net YPP is a solid predictor of a team’s conference record, we can use it to identify which teams had a significant disparity between their conference record as predicted by Net YPP and their actual conference record. I used a difference of .200 between predicted and actual winning percentage as the threshold for ‘significant’. Why .200? It is a little arbitrary, but .200 corresponds to a difference of 1.6 games over an eight game conference schedule and 1.8 games over a nine game one. Over or under-performing by more than a game and a half in a small sample seems significant to me. In the 2019 season, which teams in the ACC met this threshold? Here are ACC teams sorted by performance over what would be expected from their Net YPP numbers. 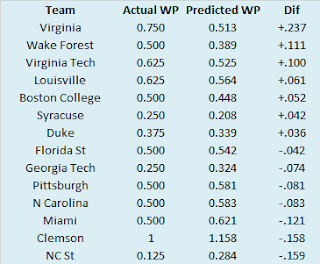 Virginia was the lone ACC team that saw their expected record based on YPP differ significantly from their actual record. The Cavaliers exceeded their expected conference won/loss record and in the process won the Coastal Division for the first time. Their division title means every team in the Coastal has won the division at least once. In 2020, Virginia will attempt to become the first repeat division winner since Virginia Tech (2010 and 2011). Virginia was not especially fortunate in close games (3-2 in one-score conference games), but thanks to the malaise of the non-Clemson portion of the conference, they were able to string together enough wins to become the Tiger’s sacrificial lamb in the ACC Championship Game.

One Ranked Team
The ACC was not a strong conference in 2019. I doubt even the most ardent Packer and Durham fan would argue otherwise. There was one elite team, Clemson, and a slew of decent to bad teams. Befitting a conference with one powerhouse and a lot of lightweights, Clemson was the lone ACC team that finished ranked in the final edition of the AP Poll. For an ostensible power conference, this is a rare ‘accomplishment’. To find out how rare, I looked up the last time each power conference finished with one ranked team. I included the five current power conferences (ACC, Big 10, Big 12, Pac-12, and SEC), a former power conference in the BCS era (Big East), and the two conferences that practically merged to form the Big 12 (Big 8 and Southwest Conference). Here is the last time each conference had only one team ranked in the final AP Poll with commentary to follow. 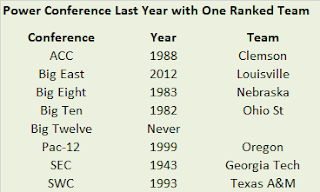 ACC: 1988
I should note the AP Poll was only twenty teams strong in 1988 (instead of 25). 1988 was a lot like 2019. Clemson was clearly the best team in the conference, although this time they did lose a close game to a team from the Tar Heel state. And just like 2019, Virginia finished second. 1988 was interesting in that no other ACC team entered the polls at any point during the season. At least 2019 saw Syracuse, Virginia, Virginia Tech, and Wake Forest with a ranking beside their name at some point.

Big East: 2012
In its final season, the Big East saw Louisville finish as the lone ranked team. The Cardinals pulled off a massive Sugar Bowl upset of Florida to finish ranked thirteenth. Louisville entered that game ranked 22nd, so had the game gone to form, it’s quite possible the Big East would have finished its final season with zero ranked teams (something that also happened in 2010).

Big Eight: 1983
The year Tom Osborne nearly won his first national title was also the only time the Oklahoma Sooners under Barry Switzer did not finish the season ranked in the final poll. The Sooners opened the season ranked second in the country, but four losses later, they were out of the polls. Once again, the AP Poll went just twenty deep in 1983.

Big Ten: 1982
On January 1st, 1983, Michigan lost the Rose Bowl to UCLA dropping them out of the final AP Poll, and leaving Ohio State as the lone ranked team from the Big 10.

Pac-12: 1999
Oregon was probably the best team in the then Pac-10 in 1999, but they lost twice in conference play and did not get the opportunity to play eventual champion Stanford. While the Ducks were the lone team to finish ranked, seven of the league’s ten members entered the AP Poll at some point in 1999 (Cal, Oregon State, and Washington State were the only teams that did not).

SEC: 1943
Yes, if you go back far enough, even the mighty SEC has a down year now and then. For some reason, only four SEC schools fielded football teams in 1943 (and two of them are not even in the league any more). Do they even care about football in the south? I did some follow-up research and it appears there was a minor geopolitical conflict in 1943.

Southwest Conference: 1993
As the conference was circling the drain, Texas A&M won their third straight SWC title and for the third year in a row, finished as the lone ranked team.

Thanks for reading. We'll be back next week with an APR look at the ACC. Spoiler, Clemson does pretty well in that metric.
Posted by matt at 3:25 AM