This week, our offseason sojourn takes us to the SEC, the home of the reigning national champs.

Here are the SEC standings. 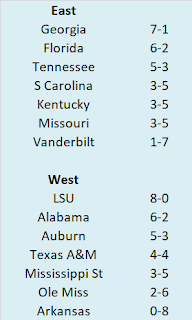 So we know what each team achieved, but how did they perform? To answer that, here are the Yards Per Play (YPP), Yards Per Play Allowed (YPA) and Net Yards Per Play (Net) numbers for each SEC team. This includes conference play only, with the championship game not included. The teams are sorted by division by Net YPP with conference rank in parentheses. 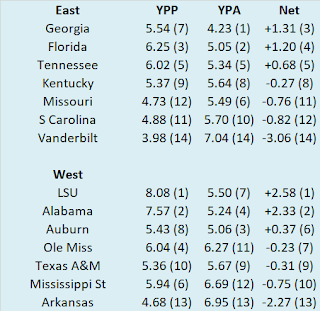 College football teams play either eight or nine conference games. Consequently, their record in such a small sample may not be indicative of their quality of play. A few fortuitous bounces here or there can be the difference between another ho-hum campaign or a special season. Randomness and other factors outside of our perception play a role in determining the standings. It would be fantastic if college football teams played 100 or even 1000 games. Then we could have a better idea about which teams were really the best. Alas, players would miss too much class time, their bodies would be battered beyond recognition, and I would never leave the couch. As it is, we have to make do with the handful of games teams do play. In those games, we can learn a lot from a team’s YPP. Since 2005, I have collected YPP data for every conference. I use conference games only because teams play such divergent non-conference schedules and the teams within a conference tend to be of similar quality. By running a regression analysis between a team’s Net YPP (the difference between their Yards Per Play and Yards Per Play Allowed) and their conference winning percentage, we can see if Net YPP is a decent predictor of a team’s record. Spoiler alert. It is. For the statistically inclined, the correlation coefficient between a team’s Net YPP in conference play and their conference record is around .66. Since Net YPP is a solid predictor of a team’s conference record, we can use it to identify which teams had a significant disparity between their conference record as predicted by Net YPP and their actual conference record. I used a difference of .200 between predicted and actual winning percentage as the threshold for ‘significant’. Why .200? It is a little arbitrary, but .200 corresponds to a difference of 1.6 games over an eight game conference schedule and 1.8 games over a nine game one. Over or under-performing by more than a game and a half in a small sample seems significant to me. In the 2019 season, which teams in the SEC met this threshold? Here are SEC teams sorted by performance over what would be expected from their Net YPP numbers. 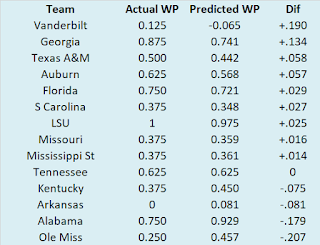 Ole Miss was the only SEC team that saw their actual record differ significantly from their expected record based on YPP. The Rebels finished 0-3 in one-score conference games, including a memorable one-point loss in the Egg Bowl that may have cost Matt Luke his job. The Rebels also dropped two non-conference games by one score, bringing their overall close game mark to 0-5. Lane Kiffin is actually stepping into a better situation than you might otherwise expect in taking over a 4-8 team in college football's toughest division. If the 2020 season is actually played, a bowl bid for the Rebels wouldn't surprise me.

The Worst SEC Team Ever (In the Past Fifteen Years)
It can be tough to realize we are witnessing history in the moment. Even though the 2019 college football season is still a vivid memory for many fans, I think there is a reasonable case to be made it featured the worst SEC team of the last decade and a half. And no, I'm not referring to the one that lost at home to San Jose State and was blown out by Western Kentucky.

Despite winning a conference game in 2019, Vanderbilt put up the worst Net YPP numbers I have on record (since 2005). While YPP is a useful tool for rating teams, I know its not perfect and far from the definitive word on team strength. With that in mind, I decided to look at SEC teams through that lens in addition to a few others and see where last year's Vanderbilt team ranked. Were they really that bad or were their numbers artificially depressed by the strength of the conference overall? Read on to find out.

As I mentioned previously, Vanderbilt had the worst Net YPP of any SEC team since 2005. Here are the other four SEC teams that make up the bottom five of Net YPP.

Vanderbilt is the lone team to finish three yards per play underwater and they were more than a half yard worse than the second worst team (Houston Nutt's final Ole Miss squad).

Regular readers know another metric I like to use to rate teams is the Adjusted Pythagorean Record (APR). While that post will be going up next week, I can give you a sneak peak of where Vanderbilt ranked in that category in 2019. Last. However, they did finish better than two other SEC teams since 2005.

Note that two Derek Mason coached Vanderbilt teams appear on this list. I know the Vandy job is tough, but he has put some really bad teams on the field in his six seasons in Nashville.

YPP and APR only include data from conference games in their ratings. However, I think its also important to look at how SEC teams did in non-conference games to get a better idea of how good (or in this case bad) they were historically. The Simple Rating System (SRS) from Sports Reference rates teams according to how many points they are above or below the average team. Using this metric, here are the bottom five SEC teams since 2005. 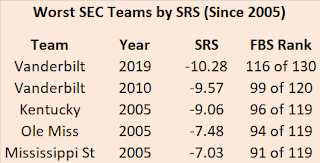 Once again, last year's Vanderbilt team comes out on top. How did they rate so low despite beating a decent Missouri team? Take a look at that non-conference schedule. They lost by double digits to a bad Purdue team, barely escaped a MAC team at home, and were blown out at home by the second worst team in the Mountain West. The SEC was a great conference in 2019, but all Vanderbilt's losses came by at least seventeen points and their only victory by more than a touchdown came against East Tennessee State. As no other team appears in the bottom five of all three metrics, much less the very bottom of two, I christen the 2019 incarnation of Vanderbilt the worst SEC team since 2005.
Posted by matt at 2:49 AM