This week, our final YPP takes us to the Sun Belt.

Here are the Sun Belt standings. 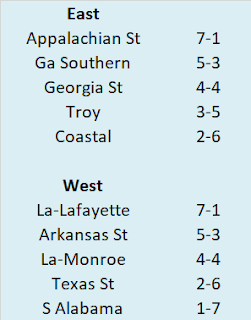 So we know what each team achieved, but how did they perform? To answer that, here are the Yards Per Play (YPP), Yards Per Play Allowed (YPA) and Net Yards Per Play (Net) numbers for each Sun Belt team. This includes conference play only, with the championship game not included. The teams are sorted by division by Net YPP with conference rank in parentheses. 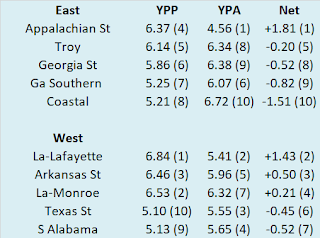 College football teams play either eight or nine conference games. Consequently, their record in such a small sample may not be indicative of their quality of play. A few fortuitous bounces here or there can be the difference between another ho-hum campaign or a special season. Randomness and other factors outside of our perception play a role in determining the standings. It would be fantastic if college football teams played 100 or even 1000 games. Then we could have a better idea about which teams were really the best. Alas, players would miss too much class time, their bodies would be battered beyond recognition, and I would never leave the couch. As it is, we have to make do with the handful of games teams do play. In those games, we can learn a lot from a team’s YPP. Since 2005, I have collected YPP data for every conference. I use conference games only because teams play such divergent non-conference schedules and the teams within a conference tend to be of similar quality. By running a regression analysis between a team’s Net YPP (the difference between their Yards Per Play and Yards Per Play Allowed) and their conference winning percentage, we can see if Net YPP is a decent predictor of a team’s record. Spoiler alert. It is. For the statistically inclined, the correlation coefficient between a team’s Net YPP in conference play and their conference record is around .66. Since Net YPP is a solid predictor of a team’s conference record, we can use it to identify which teams had a significant disparity between their conference record as predicted by Net YPP and their actual conference record. I used a difference of .200 between predicted and actual winning percentage as the threshold for ‘significant’. Why .200? It is a little arbitrary, but .200 corresponds to a difference of 1.6 games over an eight game conference schedule and 1.8 games over a nine game one. Over or under-performing by more than a game and a half in a small sample seems significant to me. In the 2019 season, which teams in the Sun Belt met this threshold? Here are Sun Belt teams sorted by performance over what would be expected from their Net YPP numbers. 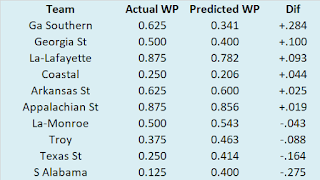 Georgia Southern significantly exceeded their expected record based on YPP thanks to a solid mark in close conference games (3-1) and the best in-conference turnover margin in the Sun Belt (+8). The Eagles were very protective of the ball in conference play, committing just two turnovers over their eight-game conference schedule. Meanwhile, South Alabama undershot their expected record based on YPP. The Jaguars were not exceptionally bad in close games (1-2 in one conference games), but their poor offense coupled with a lackluster turnover margin (-4 in Sun Belt play) kept them in the league basement despite decent peripherals.

Arkansas State and Preseason College Football
Watch any college football pregame show in late August or early September and you'll no doubt hear the talking heads emphasizing the fact that unlike the NFL, college football has no dress rehearsal. There are no preseason games to work out the kinks. Come Labor Day Weekend (and maybe a little before), the games count and teams have to work through their issues in real time. While this is technically true, Arkansas State head coach Blake Anderson has done of good job of manufacturing preseason games for his Red Wolves.

Anderson has been the head coach in Jonesboro for six seasons. During that span, his teams have been to six bowl games and won a pair of Sun Belt titles. And after three consecutive years of one and done head coaches, he has provided some much needed stability for the program. The Red Wolves have been very successful in the Sun Belt, posting a 36-12 conference record under Anderson, second only to Appalachian State in that span (41-7). However, the Red Wolves have not played very well against non-Sun Belt opponents. Excluding games against FCS teams (they did lose once), the Red Wolves are 4-13 against non-conference opponents in the regular season under Anderson. Obviously some of those games are against Power Five opponents that Arkansas State is not expected to win. So let's remove those from the equation. When we remove the eight games against Power Five opponents, Arkansas State looks a little better. Their record of 4-5 against other Group of Five opponents is mediocre, but a far cry from their .750 conference winning percentage. 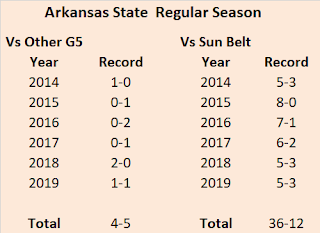 Let's examine their non-conference record another way; through the lens of the point spread. Their Against the Spread (ATS) record against G5 regular season opponents is one game worse than their actual record at 3-6. Their conference ATS record also gets worse, but they are still covering the number more than 60% of the time in Sun Belt play. 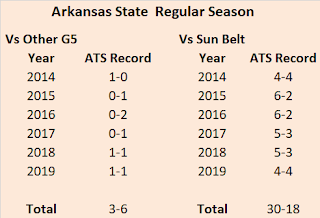 It should also be noted that three of Arkansas State's four G5 victories have come against teams that have finished 4-8 or worse (Tulsa and UNLV twice).

The Sun Belt is typically the worst FBS conference, but using the point spread to level the playing field, Arkansas State has played much better against their conference foes than against other G5 opponents. It sure seems like there is more at play here than mere randomness. My theory? Anderson knows his team has no shot to make the College Football Playoff and only an infinitesimal chance to play in a New Year's Six Bowl. Thus, he treats the non-conference schedule, even against teams Arkansas State can theoretically compete with, as a chance to iron things out in preparation for the conference season. All that matters is Sun Belt play and a chance to win a conference title. In all six seasons, the schedule has played out the same way. Arkansas State opens with four non-conference games (three in 2017 thanks to a cancelation) and then eight Sun Belt contests. Despite the occasional rough start in the non-conference, by the time league play starts, Arkansas State is hitting their stride.
Posted by matt at 4:46 AM