Two weeks ago, we looked at first half point differential in the Group of Five conferences to try and identify some teams that might surprise and or disappoint us this season (caveats about the general weirdness of the 2020 season notwithstanding). With the season a month away (hopefully), we'll do the same for the Power 5.
Atlantic Coast Conference
The 2020 ACC standings. 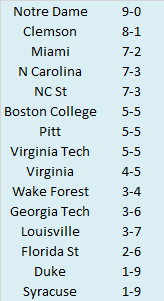 1HPD in ACC play (title game excluded with numbers on a per game basis). 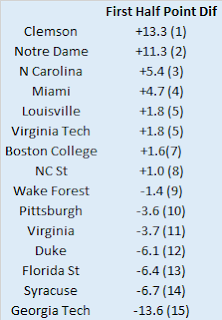 The 1HPD mostly reflected the actual standings. The top two teams, Clemson and Notre Dame, met in the ACC Championship Game, and eventually were selected for the College Football Playoff. The top four teams in 1HPD combined to go 31-6 in conference play (27-2 in games not involving each other). At the bottom of the standings, keep an eye on Georgia Tech. While their margin is significantly impacted by the loss to Clemson (trailed by 45 at the half), even if we remove that game, they would have still ranked last in the conference (-9.6 average 1HPD)!
Big 10
The 2020 Big 10 standings. 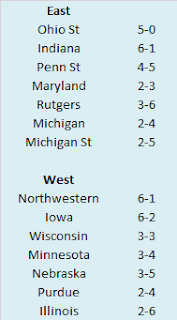 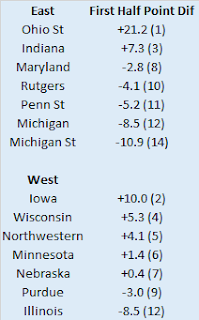 Ohio State was plenty dominant in their abbreviated campaign, averaging more than a three touchdown halftime lead in their five conference games. The real shame was in the other division, where two close losses to open the season kept a pretty good Iowa team from getting a shot at the Buckeyes.
Big 12
The 2020 Big 12 standings. 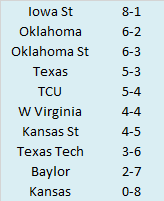 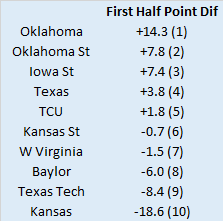 I haven't been watching the news lately? Has anything of note happened in the Big 12? Despite opening the season with back to back losses, Oklahoma never trailed at the half in any of their conference games. At the other end of the Big 12 spectrum, Kansas never led at halftime in any conference game and trailed by ay least ten points in six of their eight games.
Pac-12
The 2020 Pac-12 standings. 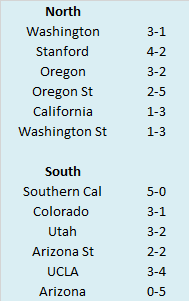 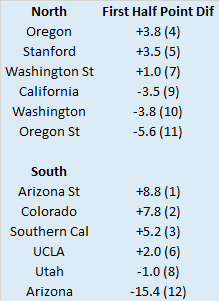 The 2020 Pac-12 was plagued by a small sample of games. Oregon State and UCLA were the only teams to play seven conference games (two games short of a normal Pac-12 slate) and five teams played four conference games. Included in that quintet are the top two teams in 1HPD. Arizona State's entire positive first half margin is due to their beatdown of in-state rival Arizona (+35 in that game and dead even in the other three). Meanwhile, Colorado was the only Pac-12 team to never trail at the half in 2020, but in three of their four games, their margins at halftime were one, four, and five points respectively.
SEC
The 2020 SEC standings. 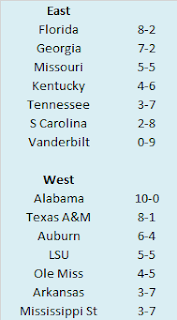 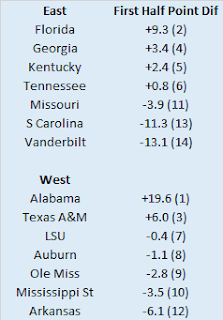 That Alabama team wasn't half bad. Their 1HPD was better than the combined differential of teams two through four! In the West, Texas A&M was the only team that joined Alabama with a positive differential. Considering that negative margin, of the teams outside of  the Tide and Aggies, you might think the East held their own against the West. You would be wrong. The West went 19-9 against the East in 2020 and the only West team to finish with a losing record against their intra-division opponents was Arkansas (1-3).
Our rundown of the Power Five conferences is complete. Now we come to the part you have been anxiously awaiting. Which teams over or under-performed relative to their expected record based on IHPD? We'll start with the overachievers.

Georgia Tech won a third of their conference games, stoking expectations ever so slightly as Geoff Collins enters the third year of his triple option cleanse. However, in their nine conference games, they led at halftime just once (by two points). In the Big 10, Northwestern paired a mediocre offense with a good defense and with some close game good fortune (3-0 in one-score conference games), it was enough to get them to the Big 10 Championship Game and *checks notes* a top ten AP finish. Southern Cal and Washington are your 2020 poster children for small sample sizes. The Trojans played five regular season conference games and won them all, but needed three fourth quarter comebacks to do so. Meanwhile Washington played four conference games, and trailed by three touchdowns at the half in two of them. Finally, in the SEC, Texas A&M crafted a marginal playoff resume despite a dearth of true dominance.
And now the underachievers.

After purging the Bobby Petrino stench from the program in his first season in charge, Scott Satterfield and the Cardinals struggled in close games, posting an 0-4 record in one-score conference games. In the Pac-12, the previous sample size caveats apply here. Arizona played five games and trailed by five touchdowns at the half in their finale which skews their numbers. Cal and Washington State played four games apiece and probably should have won an extra game each. Finally, in a shocking turn of events, Tennessee was actually kind of mediocre in 2020 instead of plain bad. The Vols were winning or tied at the half in six of their ten conference games, but lost half of them (which includes blowing a double digit lead against Arkansas) to finish 3-7.
How useful will this data be going forward? Will a weird season marked by cancelations and postponements against the backdrop of a global pandemic have any predictive value as we head into another season that may well have its own share of cancelations or forfeits? Hopefully we get to start finding out in four weeks.
Posted by matt at 5:34 PM