In our half-decade retrospective, we now come to a league that spans from deep in the heart of Texas to the eastern part of North Carolina. While the league has yet to produce a BCS-caliber team like the Mountain West and WAC, Conference USA has seen its share of press clippings in the last few years. Who can forget East Carolina's tour de force upsets of Virginia Tech and West Virginia to begin the 2008 season or the similar path trekked by Houston at the beginning of 2009 when they knocked off Big 12 neighbors Oklahoma State and Texas Tech?

First off, here are the combined Conference USA standings from 2005-2009. 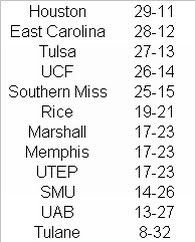 The league has been dominated for the last 5 years by a handful of teams. The top-5 teams in the conference in that time span have all won more than 60% of their league games. Its a close race at the top with Houston narrowly edging out East Carolina and Tulsa as the kings of the conference. Houston, East Carolina, and Southern Miss are the only schools to not post a losing season in league play since 2005. Tulane is the only school to not finish with at least a .500 mark in conference play at least once. The Green Wave had their best season in 2007 when they went 3-5. SMU is the only team to have gone winless in league play, having accomplished that 'feat' in back-to-back seasons (2007 and 2008). Amazingly, even with the combined 0-16 record in those seasons, they still rank ahead of 2 teams in wins over the past 5 years. No team has gone undefeated in the league since the divisional format was introduced in 2005. However, at least one team has gone 7-1 in each season. UCF went 7-1 twice, in both 2005 and 2007. East Carolina went 7-1 in 2009, Tulsa and Rice both finished 7-1 in 2008, and Houston went 7-1 in 2006. 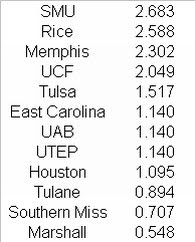 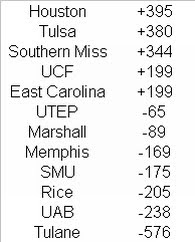 The league's best team has also been its most dominant. After narrowly edging Tulsa in the standings, Houston also narrowly edges the Golden Hurricane in point differential. Surprisingly, Southern Miss is very close to the western powers in terms of per game dominance. However, the Golden Eagles have struggled to win one-score games, going 7-11 in such games since 2005. Conversely, East Carolina is 13-5 in such games, enabling them to finish near the top of the standings despite a weaker point differential. Tulane has been the league's most dominated team by a healthy margin. Their point differential of -576 is more than that of the 2nd (UAB) and 3rd (Rice) worst teams combined (-443). 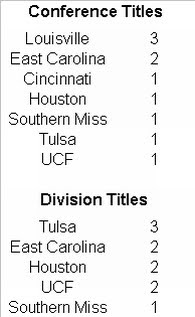 Ah Louisville, remember them? The Cardinals won a pair of Conference USA titles under John L Smith in 2000 and 2001, then won another in 2004 under Bobby Petrino in their final season before heading to the Big East. Another former member, Cincinnati, also won the title in 2002. Since the divisional format began in 2005, the West has been represented each season by Houston or Tulsa in the CUSA Championship Game. However, after taking the first 2 contests (Tulsa in 2005 and Houston in 2006), the West has dropped 3 straight. East Carolina is the current member with the most titles in the 2000's, having brought home consecutive wins to close the decade.

And finally, what was the biggest takeaway from the 00 decade in Conference USA?
The metamorphosis of the Rice offense. Ken Hatfield came to Rice in 1994 after being canned by Clemson. Hatfield implemented an option-style, run-centric offense. Hatfield stayed at Rice until his ouster following the 2005 season. I don't have passing numbers for his tenure in the 1990's but from 2000-2005 (6 seasons), Hatfield's Rice teams threw a combined 43 touchdowns, with 11 being the most in any single season. Over those 6 seasons, the Owls averaged 24.6 points per game, topping out at 28.6 points per game in 2003. Hatfield was replaced by Todd Graham in 2006 and the offense shifted dramatically. Behind the passing of quarterback Chase Clement, the hands of receiver Jarett Dillard, and the toughness of tight end hybrid James Casey the Owls went on quite a run from 2006-2008. Over those 3 seasons, Rice threw 106 touchdown passes as a team and averaged 33.2 points per game. They also did it under 2 different coaches. After leading Rice to a bowl game in 2006, Graham bolted for division rival Tulsa. His replacement David Bailiff didn't change offensive schemes and the Owls continued to produce. Switching from a run-heavy option offense to one that relies on the pass does not usually produce such extreme results so quickly. Clement, Dillard, and Casey matriculated after the 2008 season and there were some growing pains in 2009. The 2009 Owls threw only 14 touchdowns and averaged just over 18 points per game, but did improve as the season wore on, averaging 25 points per game over the final third of the season after managing only 14.9 per game over the first two-thirds. With 9 offensive starters back in 2010, expect the Owls to more closely resemble the offense that took the field near the end of the 2009 campaign.
Posted by matt at 4:12 PM