Only a pair of leagues left to review. Even though summer has just begun, the long and perilous offseason is winding down. This week, we'll examine the Big 10's little brother, the MAC.

To refresh your memory, here are the 2009 MAC standings. 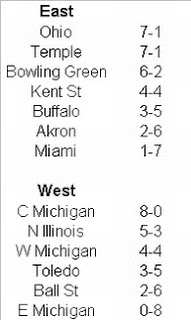 Now here are the 2009 MAC SDPI standings. The standings are sorted by division by total SDPI with ranking for each category (out of 13 teams) in parentheses. 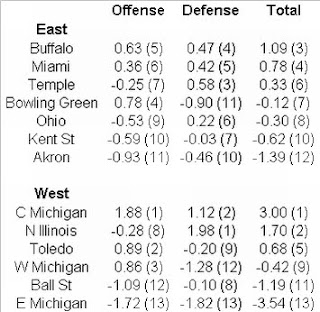 Out West, the SDPI standings are aligned pretty well with the actual standings. Central Michigan was head and shoulders above the rest of the MAC statistically, and they rolled to an undefeated league record. However, over in the East, we see some interesting results. 2008 champ, Buffalo, finished with a losing league record, but rates out as the 3rd best team in the league and best team in the East. Further down the standings, Miami of Ohio finished last in the East yet rates as the 2nd best team in the division and 4th best in the whole league! Furthermore, at the top of the East, we have a pair of teams (Ohio and Temple) that finished a combined 14-2 against the MAC, yet both were only middling according to SDPI. How can this be? Ohio and Temple posted the top-2 in-conference turnover margins last season (+11 for Temple and +10 for Ohio). Buffalo was -2 and Miami was awful at -15 (last in the league). Ohio was unbeaten in one-score league games (4-0) as was Temple (2-0). Meanwhile, Buffalo was 2-4 in such games and Miami was 1-2. Ohio and Temple also scored a lot of their points via special teams and defense. Ohio scored 5 non-offensive touchdowns in their 8 MAC games, with 3 coming via punt returner LaVon Brazill. Temple also scored 5 non-offensive touchdowns in 8 MAC games with Delano Green scoring twice on punt returns and James Nixon scoring twice on kickoff returns. Buffalo and Miami scored only once between them in non-traditional ways, with Miami returning an interception for a touchdown in their win versus Toledo.

Best Offense: Central Michigan 1.88
It was a fitting swan song for the poor man's Tim Tebow, Dan LeFevour. LeFevour threw for 28 touchdowns and ran for 15 more in his senior campaign. Under his guidance, the Chippewas were never held below 406 yards against MAC opponents, until their closer than expected win in the MAC Championship Game versus Ohio.

Worst Offense: Eastern Michigan -1.72
The Eagles best performance was a 364-yard day against Western Michigan. Had they averaged that many yards per conference game, that figure would have only ranked 7th in the MAC!

Best Defense: Northern Illinois 1.98
Until their regular season finale with Central Michigan (allowed 512 yards), the Huskies held every MAC opponent to 387 yards or fewer. They held 5 of their 8 MAC foes under 300 yards.

Worst Defense: Eastern Michigan -1.82
Befitting a winless outfit, the Eagles had both the league's worst offense and its worst defense. Every team gained at least 310 yards against the Eagles, and 5 teams topped 400 yards.

West Division:
Central Michigan has won 3 of the least 4 MAC West titles, but without record-setting quarterback Dan LeFevour and with a new coach, the Chippewas look poised to fall back to the pack. Western Michigan and Toledo also lose experienced senior quarterbacks in Tim Hiller and Aaron Opelt respectively. So who is the favorite heading into 2010? A good bet to step up and take the West are the Huskies from Northern Illinois. Jerry Kill has continued a fine winning tradition in DeKalb. Under Kill and his predecessor Joe Novak, the Huskies have finished with a winning overall record 8 times in the past 10 years. The Huskies bring back 8 starters from the league's stingiest defense and also return their starting quarterback and running back.
Posted by matt at 4:10 PM