In our half-decade retrospective, we now come to the other conference in the nation's heartland, the MAC. 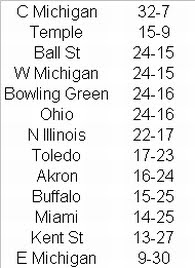 No surprise at the top. Central Michigan has won 3 of the last 4 MAC titles and holds their place at the top of the conference heap, 8 games clear of Ball State and Western Michigan. Temple has only been in the league 3 seasons (they joined prior to 2007), but their league winning percentage of .625 would rank second. In fact, Temple has more league wins in 3 seasons than Miami, Kent State, and Eastern Michigan have in 5! The MAC standings have been very fluid from year to year. 10 of the league's 13 members have had at least one winning and at least one losing conference record in the past 5 years. The only teams not have both are Eastern Michigan (only team with no winning record), Temple (one of 2 teams without a losing record), and Central Michigan (only team with a winning record each year). 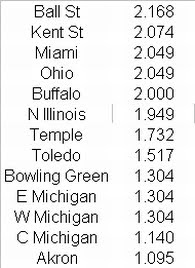 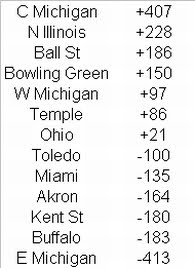 Once again, Central Michigan has been the king of the hill, besting their league opponents by nearly twice the margin of second place Northern Illinois. Similarly, at the bottom of the standings, Eastern Michigan has lost by more than the combined margins of Kent State and Buffalo, the teams ranked 11th and 12th in conference point differential.

Remember Marshall? Before heading to greener (yes that's somewhat of a pun) pastures in Conference USA, the Thundering Herd were one of the MAC's best teams. They played in the first 6 MAC Championship Games (97-02), winning 5 of them. If the MAC has been anything in the past decade, its socialistic. 10 of the league's 13 current members have played in the title game at least once (and consider Temple has only been a member for 3 seasons), with 5 different (current) teams winning the league title.

And finally, what was the biggest takeaway from the 00 decade in the MAC? The dominance of the MAC West versus the MAC East. While the MAC East and MAC West have split on conference titles in the past decade (5 each), the West has dominated the East in regular season play. Despite several shifts in conference membership since the decade dawned, the West has maintained its superiority to the East as the chart below can attest. 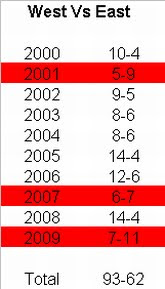 The West has had only 3 losing seasons against the East in intra-division play, and have won at least twice as many as they have lost 4 times.
Posted by matt at 3:44 PM