And now we come to the final conference in our offseason sojourn. The Sun Belt may be glossed over by the casual football fan, but if you look closely, there's some good football played here.

To refresh your memory, here are the 2009 Sun Belt standings. 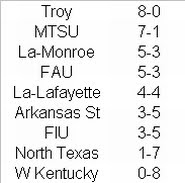 Now here are the 2009 Sun Belt SDPI standings. The standings are sorted by total SDPI with ranking for each category (out of 9 teams) in parentheses. 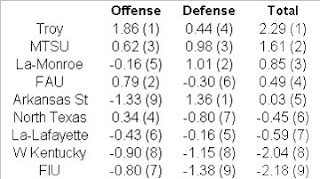 The top of the SDPI standings fall in line with the top of the actual standings. Troy was statistically the league's dominant team and they rolled to an undefeated conference season. Middle Tennessee was statistically a strong number 2, and they finished conference play unblemished save for their game against Troy. Louisiana-Monroe and Florida Atlantic were the other teams with SDPI finishes significantly higher than average, and they were the only other teams that finished with winning conference records. The only significant differences between the actual and SDPI standings came in the form of North Texas and FIU. The Mean Green from North Texas were far from a 'good' team, but from their performance, we could have expected them to win about 3 conference games. They won only a single game thanks to 4 league losses (6 overall) by a touchdown or less, compared to no wins by that small a number. Meanwhile, FIU finished with a mediocre league record, but were statistically the worst team in the conference. They weren't outstanding in one-score games (2-1 in the conference), but the few close wins they did manage kept them out of the basement.

Best Offense: Troy 1.86
Troy topped 400 yards in every league game, with their worst offensive performance coming against Louisiana-Monroe, when they only managed 428 yards. Had they only gained that many yards in each, they still would have finished better than half the league in offense.

Worst Offense: Arkansas St -1.33
This is probably not what head coach Steve Roberts envisioned when he began the season with a senior quarterback who had started since his freshman year, a senior running back coming off 3 consecutive 1000-yard seasons, and a pair of returning seniors starting at receiver. The Red Wolves broke the 400-yards barrier only twice in league play, against Florida International and Western Kentucky, the most porous offenses in the league. Blame can be thrown at the feet of an inexperienced offensive line, but the good news for 2010 is that all 5 starters return.

Best Defense: Arkansas St 1.36
And this of course makes the offense's struggles all the more disconcerting. Had the offense pulled their weight, the Red Wolves could have been champs in the Sun Belt. As it was, after surrendering 507 yards to Troy in their league opener, the defense clamped down and held 4 of their next 7 conference foes under 300 yards (last 7 averaged 314 yards per game against them).

What's in Store for Next Year?
After earning at least a share of the last 4 Sun Belt titles, 2010 could finally be the year someone dethrones Troy. Troy will be breaking in a new quarterback from last season's top-ranked offense and 8 new starters from the 4th ranked defense. However, head coach Larry Blakeney has built a consistent winner at Troy, so count the Trojans out at your own risk. Who is most likely to unseat the league overlord? Middle Tennessee State returns alliterative quarterback Dwight Dasher along with 7 other offensive starters to a team that won 10 games last season. The rest of the conference appears to be a rather large mish-mash. Expect North Texas to make major strides in Todd Dodge's 4th season. The Mean Green were far better than their disappointing 1-7 Sun Belt record year ago and with 17 starters back and a little better luck could get back to their first bowl game since 2004. Florida Atlantic posted the second best offense in the league last season even though star quarterback Rusty Smith missed the latter half of the season with an injury. Jeff Van Camp performed admirably in his stead, posting a passer rating of 141.23 with 12 touchdowns and just 2 interceptions. Unfortunately, the Owls lose 5 starters along the offensive line and last season's top-2 receivers. Their bowl hopes will likely rest upon improvement by a defense that returns 9 starters from a middling unit (6th in the Sun Belt last year). Arkansas State was a major disappointment last year, finishing with just 4 wins after being bowl eligible 3 of the previous 4 seasons. The defense was the best the Sun Belt had to offer last season, while the offense was the worst. The defense brings back the top-4 tacklers from last season and could once again be strong. The offense does return all 5 starting offensive linemen (including 4 seniors), but loses all its skill position players. Louisiana-Lafayette was bowl-eligible for the 4th time in 5 seasons last year, but were near the bottom of the league statistically. 5 of their wins were of the close variety (decided by 8 points or less) while they suffered only one such defeat. The Cajuns may improve, but lady luck will likely keep them near the middle of the Sun Belt standings. Louisiana-Monroe was statistically the 3rd strongest team last season (behind both Troy and Middle Tennessee), but has a new head coach (and a relatively poor one at that) in Todd Berry. Berry was dealt a rough hand at Army, but did little to improve the situation, going 5-36 from 2000-2003. Florida International and Western Kentucky will likely compete with Louisiana-Monroe to stay out of the basement. Western Kentucky went winless last season, and while they were bad, they were also unlucky. The Hilltoppers lost 4 games by 8 points or less and were much more competitive in their final 3, losing them by a combined 13 points. With 18 starters back, the road to IA respectability will begin in 2010.
Posted by matt at 3:31 PM