As promised a few days ago, I proudly present to you the 2010 Big East preview. If you want a primer on how these projections were produced, here's the link to the ACC Preview that gives a little background information on the system. For the rest of you, feel free to dive on in. Check back in a few days for the Big 10 Preview. 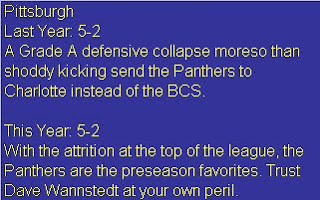 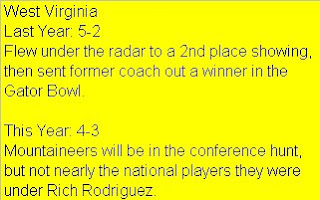 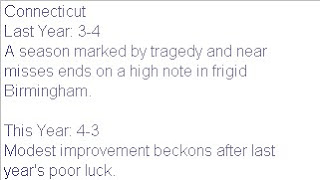 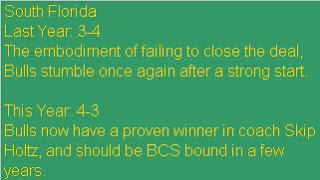 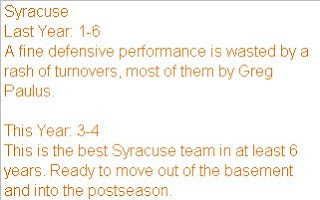 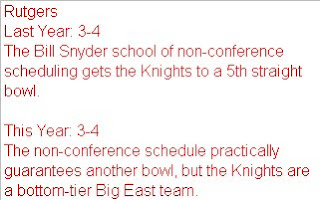 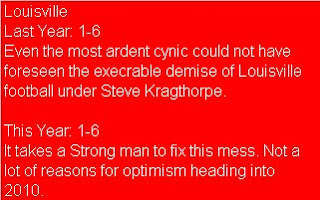 Cincinnati
Bearly any Fumbles
Cincinnati led the nation with only 2 fumbles lost in 2009. While they were lucky to only lose 2 fumbles for the entire year, they also finished first in fewest fumbles committed (11). In addition to this, Cincinnati was also very bad at forcing fumbles last season. Their opponents fumbled only 12 times all season (3 teams finished with only 11 opponent fumbles). All this meant that games involving Cincinnati featured the fewest fumbles in 2009.

Connecticut
UCONN Do It
The Huskies have experienced quite a journey over the last decade or so. They have risen from the ranks of IAA to IA Independent status to BCS conference member. Since joining the ranks of the haves (Big East) in 2004, the Huskies have been money in the bank in games against the have-nots, both straight up and against the spread (ATS).

Louisville
Down in Flames
When Steve Kragthorpe took over for Bobby Petrino following the 2006 season, Louisville and their fans were riding high. The Cardinals had just won the Orange Bowl, finishing the season ranked 6th in the nation (and just a blown lead against Rutgers from playing for the national title). Louisville returned 13 starters in 2007, including a senior star-studded quarterback in Brian Brohm, and began the season ranked number 10. The Cardinals opened the season with a 73-10 drubbing of overmatched IAA Murray State and climbed to number 8. That's when the good times stopped. Louisville won only 12 games against IA teams over the next 3 seasons, did not participate in the postseason, and gave Syracuse 2 of their 3 conference wins in that span. Not surprisingly, Kragthorpe was given the axe after completing his 3rd season. Not only did Louisville fall a long way from their perch in the Bobby Petrino-era, they posted the biggest decline in overall winning percentage when comparing the 3-year span of 2004-2006 to the 3-year span of 2007-2009 (the entirety of the Kragthorpe-era) by an extremely large margin.

Pittsburgh
Most Improved
Entering his senior campaign in 2009, Pitt quarterback Bill Stull had thrown 360 career passes for the Panthers netting 2619 yards with a pedestrian TD:Int ratio of 11 to 10. In 2009, Stull threw 321 passes, gaining 2633 yards with 21 touchdowns and 8 interceptions.


Rutgers
Knight and Day
Prior to the 2005 season, Rutgers had participated in one bowl game in their history. They have now gone to 5 straight bowl games, winning 4 of them. However, perhaps more impressive than this feat is the amount by which they have improved in the Big East. Since 2005, Rutgers is 20-15 against their conference brethren (third best record in that span). In the 12 seasons starting in 1993 (when the Big East officially began play) through 2004, the Scarlet Knights won 12 conference games, or an average of one per season.

South Florida
The Missouri Compromise
I know, what the heck does a pre-Civil War law passed all the way back in 1820 have to with the South Florida Bulls? Well, allow me to explain. South Florida is in a unique situation in the Big East. When the end of the calendar year arrives (October, November, and December) the Bulls have an issue their fellow sunshine state universities do not. That is of course, they must annually play in cold weather games. Think about it. Every other year, South Florida must travel to New Jersey (Rutgers), Pennsylvania (Pitt), Kentucky (Louisville), West Virginia, Ohio (Cincinnati), and Connecticut. Their other road contest that occurs every other year is in up-state New York, but that game is indoors. In addition, the fact that the Big East has only 8 teams (thus only 7 conference games), means these games nearly always occur later in the year. The other BCS schools in Florida (Florida, Florida State, and Miami) do not have to deal with the weather issue. The farthest north Florida potentially has to travel late in the year is to Kentucky. Florida State has to travel to Massachusetts every other year, and occasionally must trek to Virgina (Virginia and Virginia Tech). Miami travels to Virginia once a year (as their Virginia and Virginia Tech roadies are split up) and must occasionally journey to Massachusetts. However, for those teams its not virtually guaranteed that those games will be late in the year, and more importantly it represents only a small percentage of their road games. Now that we've identified South Florida's unique situation, how have they performed since joining the Big East in 2005 in those games? The table below lists South Florida's record in outdoor road games in the 'Northern' United States on or after October 1st and their record in all other road games. For the purpose of this study, the 'North' is differentiated by the line drawn during The Missouri Compromise. 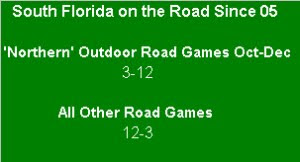 That's a pretty big difference eh? But schedule strength can account for some of this, so lets dig a little deeper just to be sure. The 'Northern' outdoor road games are all games against Big East foes. The other road games include road games with the resident Big East whipping boy, Syracuse (because it occurs in a climate controlled dome), and the rest are non-conference games, ranging from cupcakes (Western Kentucky and Florida International) to national powers (Auburn, Florida State, Miami, and Penn State). If only there were some way to account for schedule strength. If only a weekly prognostication tool put out by an unbiased third party could rate the teams and determine who was favored and to what extent. Thankfully, Las Vegas and plenty of offshore sportsbooks do produce such a number. Its called the betting line. This next table shows how South Florida has done against the spread (ATS) in both types of games. 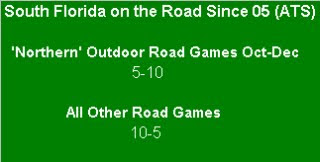 As you can see, their performance outdoors in the 'North' has not been much better ATS, and their performance in all other road games has been just a shade worse. I think the most damning indictment of South Florida's performance outdoors in the 'North' is this. In 8 of their 15 'Northern' outdoor road games, South Florida has been a betting line favorite. They have won exactly one of those games straight up (1-7 record). Of course, they haven't been huge favorites in those games, as only 2 lines have been by a touchdown or more (the largest line of 9 points against Pitt in 2007 is the only game South Florida has won straight up), but they have been favorites nonetheless. In the 'other' road games, South Florida has been a betting line favorite 10 times. They have not lost a single one of these 'other' road contests. Who knows if this trend will continue under new coach Skip Holtz, but it is something to consider if you find yourself contemplating wagering your mortgage payment on South Florida late in the year.


Syracuse
Orange You Glad It Wasn't Close?
In the present edition of the Big East (since 2005), Syracuse has by far the worst record in league play at 4-31. The second worst team in that span is Connecticut. However, the Huskies have gone a respectable 14-21, meaning they are 10 games clear of the Orange. Perhaps the most amazing dimension of their suckitude has been how non-competitive the Orange have been. Of their 31 league losses, 28 have come by more than a touchdown and 16 (more than half) have come by at least 3 touchdowns. Of their 4 wins, only one has come by more than 7 points (an 18-point shellacking of Rutgers this past season).


West Virginia
Getting Bullied
Since the present incarnation of the Big East began play in 2005, West Virginia has been the league's preeminent program. The Mountaineers have finished above .500 every season in league play, and have won a pair of conference titles. Their overall conference record of 27-8 is tops, and 4 games clear of second-place Cincinnati. The Mountaineers also have a winning record and positive point differential against every team in the conference except South Florida. 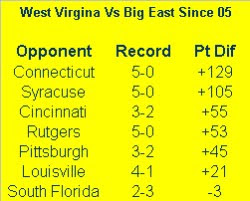 Somehow the Bulls, who are a mediocre 17-18 in conference play since joining the Big East, have been the only team to have West Virginia's number.
Posted by matt at 3:50 PM