Only 5 weeks (35 days) until the beginning of the college football season! Today we preview the Big 10. If you want a primer on these projections, here's the link to the ACC Preview which gives a short explanation of where these numbers come from. Check back in a few days for the Big 12 Preview. 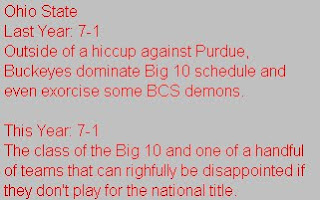 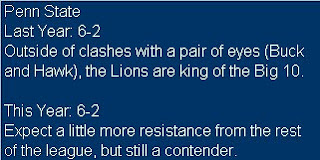 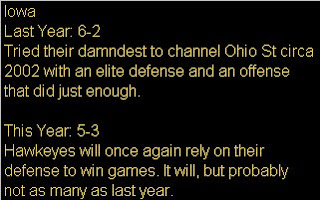 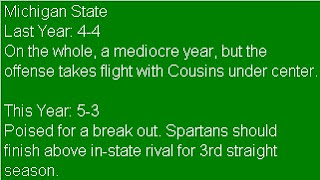 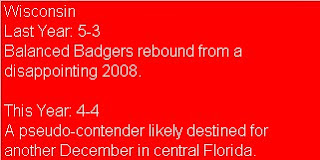 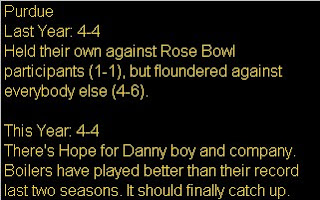 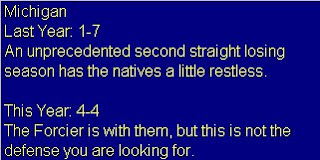 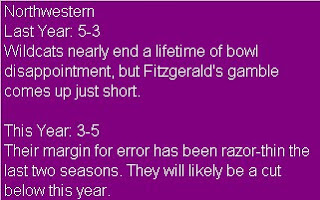 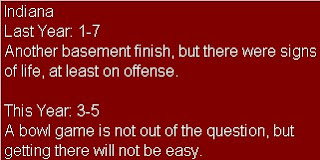 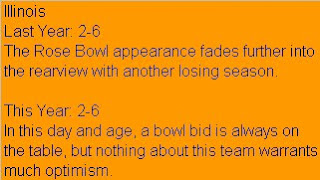 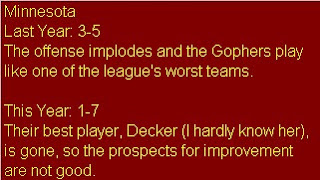 Illinois
License to Ill
Since the dawning of the BCS era (1998) a handful of teams, 10 to be exact, have endured losing records just one season after playing in a BCS Bowl Game. The Illini, along with Notre Dame, are the only school to have done it twice. 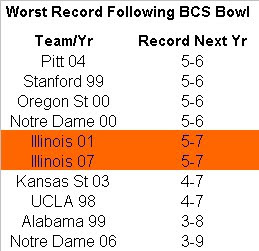 Indiana
Long Line of Losers
It may not come as a surprise to you, faithful reader, that Indiana has the worst conference record of any Big 10 member in the past decade. It may surprise you how many 'disastrous' conference seasons they have had. Let's define 'disastrous' as campaigns that result in one league win or fewer. There were 14 such instances in the last decade. Indiana was responsible for 6 of them. 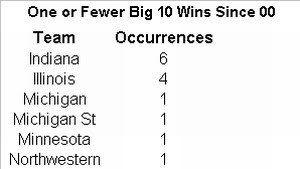 Iowa
Surprise, Surprise
In the past decade, the Iowa Hawkeyes were one of only 2 teams to have a pair of 'surprise' top 10 appearances. A surprise top 10 appearance means the Hawkeyes began the year ranked outside the top 25, yet finished the season ranked in the top 10 (based on the preseason and end of season AP polls).

Perhaps even more amazing is that the surprise top 10 appearances happened in consecutive seasons (2002 and 2003).


Michigan
Worst...Defense...Ever
If you happen to stop by a pub in Ann Arbor and get to conversing with an old-timer about Michigan football and he says something like 'These past few years have been the worst Michigan defenses I've ever seen', he's not just vexing his frustration in some hyperbole. 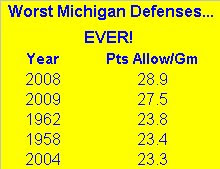 Michigan St
OK Sparty, Go to a Party
Michigan State followed up a 9-win season in 2008 (their first since 1999) with a lackluster 6-7 showing. They did this despite increasing their offensive production after losing a senior-laden backfield. Why did the Spartans slump despite the offensive improvement? Their defense, in particular their pass defense, was one of the worst in the nation. Michigan State finished 101st in the nation in opponent quarterback rating, 112th in passing yards per game allowed, and dead last in opponent TD/Int ratio. 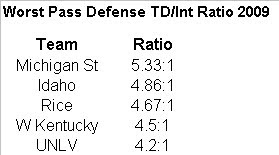 Michigan State allowed opposing quarterbacks to throw 32 touchdown passes in 2009, and only grabbed 6 interceptions. Compared to the other 5 teams on this list, Michigan State was lucky they didn't have an even worse record. The Spartans ranked 65th in scoring defense, allowing 26.3 points per game. None of the other 4 teams on this list ranked higher than 103rd in scoring defense (UNLV) with Western Kentucky and Rice pulling up the rear for all IA teams at 119th and 120th respectively.


Minnesota
Bustin' the Line
Under Glen Mason (coach from 1997-2006 before his ridiculous firing) the Golden Gophers achieved a modicum of success. They went to 7 bowl games, winning 3 of them, and in 2003 notched 10 wins for the first time since 1905. What Minnesota came to be known for under Mason was power football. The Gophers, with a stable of backfield stars who would go on to play in the pros (Marion Barber, Laurence Maroney, and Gary Russell to name a few) running behind some big uglies who would do the same (Jerome Davis, Adam Haayer, and Ben Hamilton again to name a few) the Gophers would have made Woody Hayes proud. However, under Mason's replacement, Tim Brewster, the running game has devolved, and methinks its the offensive line that is to blame.

The running game slipped a bit in Mason's final season (2006), and did not see a significant decline in Brewster's first season (probably because he still had a large number of Mason's players). However, since then not only has the running game imploded, so has another portion of the game that is predicated on a solid offensive line.

I don't have sack data for any other seasons when the Gopher's were coached by Mason, but as you can see, the team's sack rate actually improved in the first year of the Brewster regime (again with a lot of Mason's players). However, once Brewster had to bring his own guys in, the offensive line functioned more like a turnstile, allowing teams to sack Gopher quarterbacks nearly once every 10 pass attempts in 2009. University of Minnesota, let me humbly offer a suggestion. In this era we live in, reconciliation is all the rage (just look at Bristol and Levi). So, admit you made a mistake and beg Mason to take you back. Heck, even offer to put him on the cover of Playgirl if that's what it takes.


Northwestern
Not a Bad Decade
If you were a Northwestern football fan growing up in the 1980's let me start by offering you my condolences. For the better part of the second half of the 20th century, the Northwestern Wildcats were a laughing stock in the Big 10. Then, seemingly out of nowhere they won the Big 10 with a perfect 8-0 record in 1995 (just 2 years removed from a winless Big 10 season) and played in the Rose Bowl. They won 7 of their 8 Big 10 games the next season and looked to be on their way out of the mire. However, after those 2 somewhat fluky seasons, the Wildcats closed the 90's by winning just 4 league games from 1997-1999. Still, the team won 27 league games in the 90's, more than double their win total from the woeful 80's. And just when Northwestern fans thought it couldn't get any better, well it did. While the Wildcats failed to enjoy any sensational seasons in the Big 10 this past decade, they did win at least 5 league games 5 times. They also avoided the shame of any winless seasons, something that happened 5 total times in the 80's and 90's. In fact, when taken together, the Wildcats nearly won as many Big 10 games in the past 10 years (38) as they had won in the previous 20 (40).

Ohio State
Playing it Close to the (Sweater) Vest
Ohio State head coach Jim Tressell is widely regarded as one of the most conservative coaches in all of college football. Conventional wisdom has it that his Buckeye teams take very few risks, win the turnover battle, and run the football to win games. Conservative is a very nebulous term, and somewhat hard to define. However, one factor that most football observers would tend agree on as a conservative strategy is punting on 4th down. Therefore, it stands to reason that going for it on 4th down would be considered a more risky approach to football. To see how Tressel's teams ranked in this measure of conservativeness, I looked at which teams attempted the fewest 4th down conversions over the past 4 seasons. 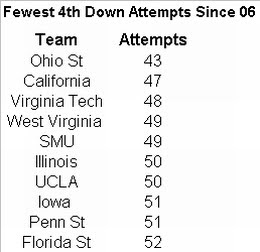 As you can see, in this regard, Tressell has clearly earned his moniker as a conservative coach. His Buckeyes have only attempted to gain a first down 43 times in the past 4 seasons on 4th down. What's also interesting about this list is that several coaches, chiefly offensive minded leaders at Cal (Jeff Tedford) and SMU (June Jones) have also been rather risk-adverse when it comes to going for it on 4th down. I'm particularly surprised at SMU. In Jones' final 2 seasons as head coach at Hawaii (2006-2007), the Warriors attempted to convert on 4th down 40 times. In his 2 seasons at SMU, the Mustangs have only gone for it 20 times on 4th down. Perhaps part of it is trust, as Jones may not yet trust his Mustangs to run his system, while conversely at Hawaii, Jones had Colt Brennan running his offense. 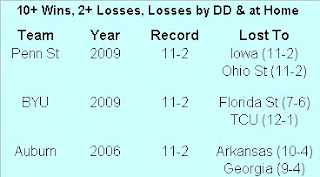 Purdue
Joe Tiller: Ralph Friedgen-Lite
The Joe Tiller era at Purdue was a rousing success. In his 12 seasons, he guided the Boilermakers to 10 bowl appearances (they had made 5 previous appearances in their football history), and their first Rose Bowl berth since 1966. However, looking back on Tiller's tenure, it looks like he experienced a Ralph Friedgen-like meteoric rise in his first few seasons, followed by several years of being only average (which in both cases represented significant progress over their predecessors). 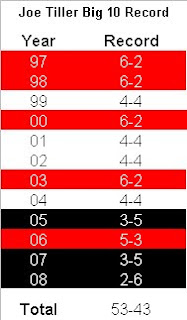 I'll summarize the numbers for you. In his first 4 seasons at Purdue, Tiller guided the Boilers to a 22-10 Big 10 record, thrice finishing with 6 wins, and sharing the league title in 2000 (and earning that sought-after Rose Bowl berth). In his final 8 seasons, Tiller's teams went 31-33 in the Big 10, posting only 2 winning Big 10 records and never again winning the league title. There's a plethora of potential reasons for this decline including more teams running the spread making it less unique and easier to defense, other successful coaches entering the league, recruiting falling off, etc. I'm not going to try and dissect those reasons for you. The important thing to remember is that Tiller was the best coach Purdue has had in 3 decades and should probably have a statue built in his honor.


Wisconsin
Sticking to the Script
Since taking over for Barry Alvarez prior to the 2006 season, head coach Bret Bielema has continued Wisconsin's recent history of winning. Bielema has amassed a 38-14 record in 4 seasons (20-12 in the Big 10) and had the Badgers finish in the final polls 3 times. However, what's even more amazing is that the Badgers have not changed their offensive philosophy at all. 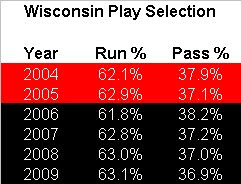 Under Alvarez, the Badgers earned a reputation (and rightly so) as a team that won by running the football. Bielema has not changed that formula. In the past 6 seasons (Alvarez years highlighted in red), the Badgers have run the ball between 61.8% and 63.1% of the time, an amazing run (pardon the pun) of consistency.
Posted by matt at 2:35 PM