We are exactly a month away from kickoff (31 days)! Here comes the home stretch. Today we preview the Big 12. If you want a primer on these projections, here's the link to the ACC Preview which gives a short explanation of where these numbers come from. Check back in a few days for the Pac-10 Preview. 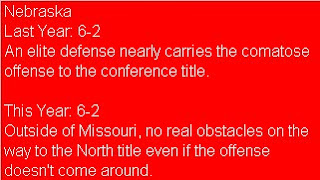 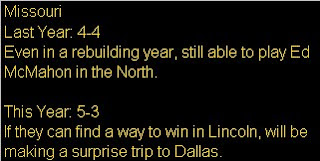 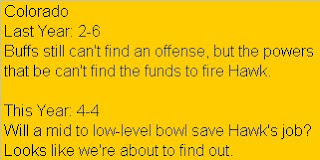 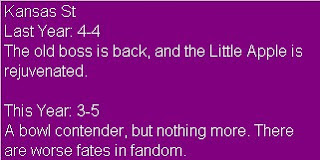 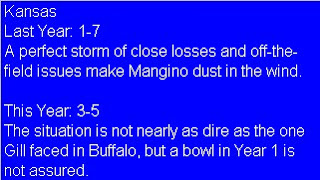 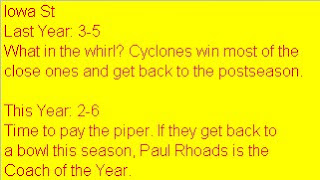 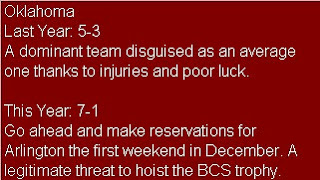 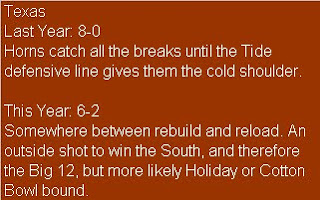 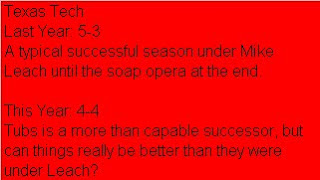 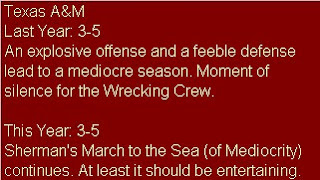 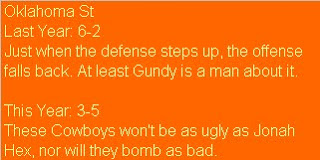 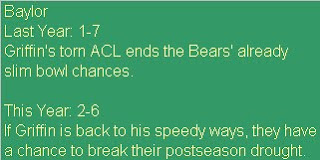 Colorado
The Air Up There
One of the most difficult variables to account for when evaluating home/road splits is schedule strength. Some teams may play better at home, not because they have a great homefield advantage, but because they happened to play much weaker teams at home. Similarly a reverse split could exist because team's road schedule was much easier. However, there is one facet of football for which the ability of the opponent has practically no effect on a team's performance. Kickoffs. I'm not referring to returns here, which has very much to do with the blocking and return skills of the opposing team. I'm talking about the action of kicking off and trying to force the opposing team to down the ball in their own endzone. Commonly referred to as a touchback by those in the know. In the past 2 seasons, Colorado has had 2 players kickoff for them, Aric Goodman and Jameson Davis. Goodman has converted 15 touchbacks in 53 kickoffs and Davis converted 15 in 48 kickoffs. Thus, as a team, the Buffs have combined for 30 touchbacks in 101 attempts. However, when we look at how they have performed at home versus on the road, one can easily tell Goodman and Davis have been aided tremendously by the thin air in their home stadium.

Iowa State
All the Help They Can Get
In 2009, Iowa State won at Nebraska for the first time since 1977. How did they do it? Well, the Huskers certainly helped. Nebraska committed 8 turnovers, losing 5 fumbles and tossing 3 interceptions. The Cyclones did not commit a single turnover. Iowa State's turnover margin of +8 is tied for the best single game margin since 2006.

Not surprisingly, when you get a ton more turnovers than your opponent in a single game, you usually win. What's interesting though, is just how close the margin is (especially compared to the other massive turnover games) despite the 8 turnovers by the Huskers.


Kansas
September Dreams
If you would have predicted in early October that then coach Mark Mangino would not be around to coach the Jayhawks in 2010, you'd have been laughed right out of Lawrence. At the time, the Jayhawks were 5-0 (25-6 in their last 31 games over 2 and half seasons) and ranked 17th in the nation. Of course, the Jayhawks proceeded to lose 7 straight games, and it was revealed that Mr. Mangino was kind of a douche. With the weight of the losing streak and the allegations of player abuse, Mangino was sent packing at season's end. However, the Jayhawks can take solace in the fact that they were a very unique team in 2009. Only 2 other teams in the past 5 seasons have won their first 3 games by double digits and gone on to have a losing season.

Along with Kansas, Michigan State (2006) and Washington State (2005) also began the year pummeling lesser foes before snapping back to reality in conference play. One consistent characteristic of all 3 teams was their inability to play well in the clutch, as evidenced by their record in one-score games (combined 4-12).


Kansas State
Bill Snyder: The Miracle Worker
It's no secret that Bill Snyder is Kansas State football. He guided the Wildcats from the bottom of Division IA football to the cusp of a national championship in just under a decade. While his success lagged at the end of his first tenure in Manhattan, and it remains to be seen how well his second coming will play out, we shouldn't let that diminish what he has accomplished. Snyder began coaching the Wildcats in 1989 while they were in the midst of a surreal losing streak, having not emerged victorious since October of 1986! Snyder guided the Wildcats for the final 7 years of play in the Big 8 conference (1989-1995). His Big 8 conference record was a respectable 22-26-1, especially considering he lost his first 8 league games. To put that win total in perspective, from 1970-1988 (19 seasons) the Wildcats won 25 conference games! Snyder earned a rep for scheduling cupcakes to pad his teams' win totals and earn bowl bids, but his charges performed very well within the conference too.


Missouri
An Emerging Dyad?
Missouri and Nebraska have won the last 4 Big 12 North titles, and while neither has yet to break through and actually beat the South division champ, the Tigers and Cornhuskers have dominated their fellow North division 'rivals'. Against the other 4 North division teams since 2006, Missouri and Nebraska are a combined 27-5! They are a combined 6-2 versus Iowa State, 6-2 versus Kansas, 7-1 versus Colorado, and an unblemished 8-0 versus Kansas State. I would count on that trend continuing in the last season of the Big 12 as we know it.


Nebraska
Big 8? More Like Big 2
To say Oklahoma and Nebraska dominated the Big 8 Conference (the precursor to the Big 12) is an understatement. From 1962-1988 either Nebraska or Oklahoma was at worst co-champion of the conference each season! Colorado broke the string when they won the conference outright in 1989. The Buffs repeated in 1990, but then ceded their power back to Lincoln as the Huskers won or shared the last 5 Big 8 conference titles.


Baylor
The B#tches of the Big 12
When I was in undergrad, a friend of mine coined the preceding off-color term to describe Baylor football. He was pretty much right on. Baylor has been getting pushed around by their Big 12 brethren since the league formed prior to the 1996 football season. And how. 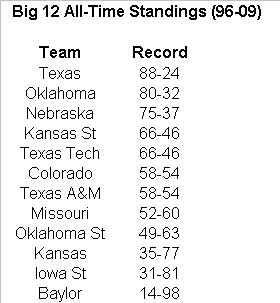 Since league play began in 1996 (14 seasons), the Bears have averaged one league win per season. The second-worst team in that span (Iowa State) has more than double the conference wins of the Bears. Baylor has won either 0 or a single league game 11 times in 14 seasons. Their best mark in league play was 3-5 in 2006. In fact, they are the only team to not finish with a .500 league mark (4-4) at least once. 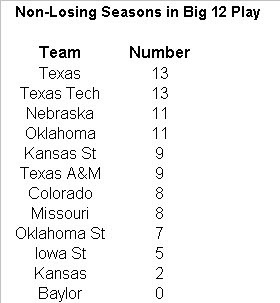 Art Briles has his work cut out for him if he wants to break that chain. In fact, its conceivable that the Big 12 could fold (when the next round of realignment comes) without Baylor ever posting a break even season in conference play.


Oklahoma
Holding the Line
In 2008, Oklahoma averaged an amazing 51.1 points per game en route to an appearance in the BCS Championship Game. After the 2008 season, the Sooners lost 4 starters from the offensive line and regression seemed like the order of the day. True to form, the Sooners averaged 'only' 31.1 points per game in 2009 and stumbled to an 8-5 record. The iconic moment for the 2009 Sooners was Sam Bradford being slammed to the turf against BYU in the season opener, injuring his shoulder and becoming a harbinger for a season-ending injury that came a few weeks later against Texas. One would expect given the rampant changes along the offensive line that Sooners quarterbacks were flattened much more often than they were in 2008. However, that was not the case.

Sooners quarterbacks were sacked negligibly more often in 2009 than they were in 2008. No, the real difference was in the offensive line's run blocking.

The Sooners dropped precipitously in both yards per game and yards per attempt. With 3 starters back and more experience at quarterback to take pressure off the running game, look for much improved rushing numbers in 2010.


Oklahoma State
Sharp Dressed Man
Last year, Oklahoma State enjoyed one of their finest seasons since Barry Sanders was carrying the football, going 9-4 and participating in the Cotton Bowl. One of the more unsung heroes from last year's team was punter and kickoff specialist Quinn Sharpe. Not only was Sharpe 5th in the nation in punting averaging (booming his kicks an average of 45.12 yards), he also led the nation in touchbacks (35) and touchback % (50%).


Texas
Pinpoint Accuracy
During his 4-year career at the University of Texas, Colt McCoy completed an amazing 70.33% of his passes. What's even more amazing is that only twice in his 53 career games did he ever complete fewer than half his passes (both occurred in 2007, against Kansas State and Nebraska).


Texas A&M
When We Were Kings
I know it seems impossible now, but there was a time when the Aggies, not the Longhorns were the preeminent power in the state of Texas. Don't believe me? Here are the cumulative standings for the now defunct Southwest Conference for its final 11 seasons (1985-1995). 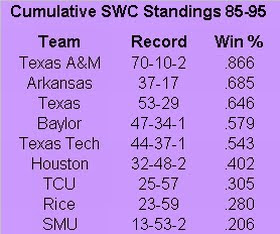 As you can see, Texas A&M dominated the league in its twilight years. The Aggies averaged less than one conference loss per season from 1985-1995. Under a pair of coaches, first Jackie Sherrill and then RC Slocum, the Aggies won (outright) 6 of the final 11 SWC titles. They also finished with the league's best record in 1994, but were ineligible for the crown. In that same span, Texas won only a pair of outright titles, and technically tied for a third in 1994 when the Aggies were ineligible. 5 teams finished 'first' that season with a 4-3 league mark (the Aggies were 6-0-1). Arkansas was the second best team in the SWC in this span, winning a pair of league crowns in 1988 and 1989 before bolting for the SEC following the 1991 season. SMU finished at the bottom of the heap thanks to the 'Death Penalty' they received following the 1986 season. In 1985 and 1986 the Mustangs were a combined 10-6 in the conference. After shuttering their football program for the 1987 and 1988 seasons, they were only 3-47-2 in their final 7 years of SWC play.


Texas Tech
Let's Go For It!
During his successful tenure at Texas Tech, Mike Leach developed a reputation as a very aggressive coach. With his penchant for lots of passes and lots of points, that appears to be a pretty deserved reputation. Perhaps another distinguishing characteristic of an aggressive coach is going for it on 4th down. Once again, Leach did not disappoint during his time in Lubbock. 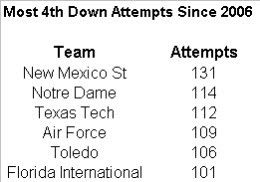