Just 23 more days until all our mortal troubles are over. Well, maybe not quite, but still, the long and arduous offseason is almost over. And just in time too, as the season previews are hitting the home stretch. Thus far, we've looked at the 6 BCS conferences and now we turn our attention to a conference that could conceivably receive an automatic BCS bid in the next round of BCS negotiations. If you want some insight into how I arrived at these numbers, take a look at the ACC Preview. Come back in a few days for the WAC Preview. 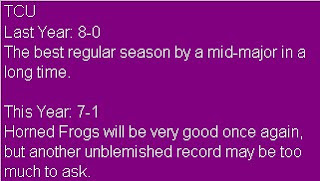 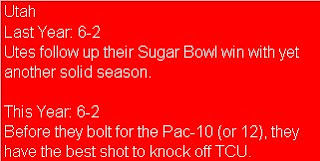 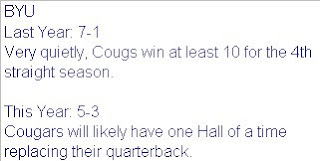 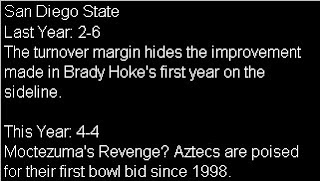 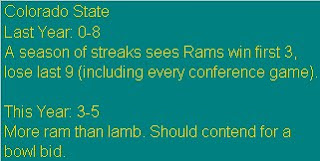 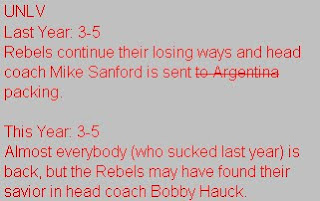 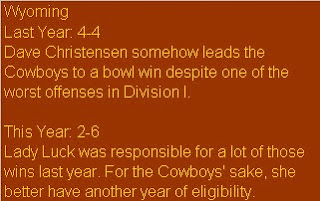 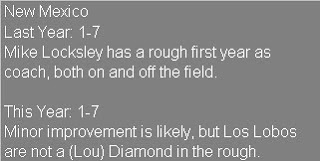 Their only loss to teams beside BYU, TCU, or Utah came in 2007 at New Mexico.


Colorado State
How Bad are Winless Teams?
I know what you're thinking. This is a worthless post. Winless teams all suck, else they wouldn't be winless. Bare with me for a moment though. First some caveats. By winless, I don't necessarily mean a winless regular season. I'm referring to a winless conference campaign, which Colorado State suffered through in 2009. The Rams actually began the season with 3 straight wins, including one over a BCS-conference foe (Colorado) and one over a bowl team (Nevada). The Rams then proceeded to lose 9 straight games, with 8 of them coming in Mountain West play. Take a look at the chart below. It lists the 12 IA teams that went winless in conference play from 2006-2008. First though, I'll define some of the columns. 'Pt Dif' stands for point differential and is the amount by which a team was outscored in their respective conference season. 'Pythag %' is the estimated Pythagorean winning percentage of each team in conference play. The Pythagorean winning percentage is a method developed by Bill James to estimate a baseball team's record based on their runs scored and runs allowed. Here's the link to the baseball formula. For the nerds and mathematicians out there, the exponent used here is 2.37. Since the Pythagorean winning percentage estimates a teams wins by taking into account the ratio of a team's scoring, it is usually a better indicator of strength (or lack thereof) than point differential. Take Florida International (FIU) from 2006 for example. Their scoring margin of -118 is very respectable for a team that went winless (3rd best differential of winless teams), but the Panthers only scored 54 points against the Sun Belt that season. Thus when compared to the 172 points they allowed, their Pythagorean winning percentage of .060 ranks 2nd to last. 'SDPI Rank' is the team's rank in SDPI (yardage version) in their conference. If you don't know what SDPI is, just scroll through some of the archives. I've written at length about it. 'Close Rec' is the team's record in one-score conference games (those decided by 8 points or less). 'Next Yr' is the team's conference record the following season. Teams with an asterisk (*) played in a bowl game the following season. 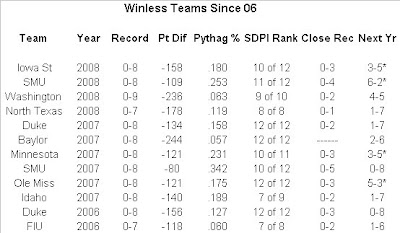 So how does Colorado State compare to these 12 teams? Pretty favorably. Their point differential (-118) would put them tied for 3rd, their Pythagorean winning percentage (.210) would rank 4th, and their SDPI rank of 6th in the Mountain West (9 teams) tops any other teams SDPI finish. 2 of the 3 teams with similar profiles to Colorado State (both iterations of SMU and Minnesota) went to bowl games the following season. It's not a sure thing that the Rams will be bowling in 2010, but the odds are better than you would think for a team coming off a winless conference season.


New Mexico
The Long Road Back to Respectability
Under former head coach Rocky Long, New Mexico had developed into a solid mid-major football team. They were not going to beat many BCS-conference teams in the non-conference schedule, but they were going to finish .500 or better in their own league and routinely compete for a bowl bid. Long coached the Lobos from 1998-2008, and qualified for bowl games 5 times, with all 5 coming in his final 7 seasons. Unfortunately, his successor Mike Locksley was not able to build upon his success. The Lobos went 1-11 in 2009, their worst record since going 2-10 in 1990. Not only did the Lobos lose a lot of games, they were also not terribly competitive in those losses. 8 of the 10 losses came by double digits and 4 came by 30 or more points. As a point of reference, Long's New Mexico teams lost 8 games by 30 or more points in his 11 seasons at the helm.


San Diego State
The Last Don
In their first year playing football at the IA level, the San Diego State Aztecs, coached by Don Coryell went 11-0. Coryell had been coaching the team since 1961 and had compiled a 68-11-2 at the small college level. In his 4 seasons coaching the Aztecs at the IA level, he never endured a losing season and posted an overall record of 36-8, with 3 PCAA (later Big West) conference titles. He would later go to have much success in the NFL as coach of the St Louis (don't call us Arizona) Cardinals and then the San Diego Chargers. After Coryell's departure, the Aztecs continued to enjoy success into the 80's under head coach Claude Gilbert, finishing with a 61-26-2 record in his 8 seasons. However, since Gilbert's ouster following only his second losing season in 1980, the Aztecs have struggled. They have gone through 6 coaches (Brady Hoke is currently coach #7) and only one, Al Luginbill has left with a winning record. What is even more amazing, is that if we only count Coryell's 36-8 record as Aztec coach once they moved to IA (and ignore his sterling 68-11 record prior), he still ranks 3rd on the all-time Aztec coaching wins list, behind Gilbert (61) and Ted Tollner (43).


TCU
The 'Normal' League
2009 marked a rare occurrence in college football. For the first time in a good while (at least since 2001), a conference finished with a perfectly 'normal' distribution of wins. If you were to graph the record of each team, you would have a perfect bell curve. 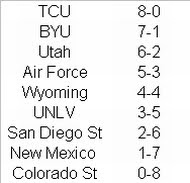 
UNLV
From Big Brother to Little Brother
The past 10 years were not exactly kind to the former Runnin' Rebels of UNLV. The Rebs posted just one winning season this decade and at one point in the middle of the aughts won 2 games for 4 straight seasons. They got a Hall of Fame coach canned (John Robinson) and ensured Mike Sanford will probably never get another head coaching gig. New head coach Bobby Hauck has quite a task in front of him, but one of the first tasks on his agenda should be beating the only other in-state IA school, Nevada. The Nevada Wolfpack brought back their own Hall of Fame coach, Chris Ault, prior to the 2004 season, and have been a perennial bowl threat since. In addition, they have also sprinted past their in-state rivals, both head-to-head and overall. Take a look at the table below.

As you can see, neither team was burning up the football world in the early part of the decade. Both schools were also-rans in their respective conferences, but UNLV was a little better. However, over the past 5 seasons, its been no contest. UNLV has barely won a quarter of their games while Nevada has won nearly 60% while going to 5 straight bowl games. Now here's how the 2 teams have done head-to-head.


Utah
Bowled Over
Since taking over the Utah program after Urban Meyer headed east for Gainesville following the 2004 season, Kyle Whittingham has been pretty successful. He's won at least 7 games each season, compiled a 47-17 record, and had the Utes as the lone unbeaten team in college football in 2008. However, his crowning achievement may be that he has won all 5 of his bowl games, with 3 coming against BCS schools (in which Utah was at least a marginal if not prohibitive underdog). Of course, this is nothing new for Utah. In his 2 seasons at the helm, Urban Meyer took the Utes to consecutive bowl games, including the Fiesta Bowl following the 2004 season. The Utes won both games, culminating with a systematic dismantling of Pitt in that Fiesta Bowl. Prior to Urban's arrival, the Utes won their final 2 bowl games of the Ron McBride era (2001 and 1999), beating Southern Cal from the Pac-10 in the 2001 Las Vegas Bowl. To recap, the Utes have won 9 straight bowl games, with 5 of them coming against teams from BCS conferences. Keep this in mind if you plan on making any wagers in the bowl season.


Wyoming
Winning Without an Offense
Last season, Wyoming managed a 7-6 record despite averaging only 18.3 points per game. That small figure ranked 109th in the nation. To calculate the average number of games a team with that type of offense usually wins, I looked at the record for each team ranked between 106th and 112th in scoring offense (3 teams above and below 109th) since 2007 (excluding last year's Wyoming). Those 20 teams combined for a record of 70-171, or roughly 3.5 wins over a 12 game regular season. No other team besides Wyoming finished with a winning record, and only 3 finished with at least 6 wins. Iowa went 6-6 in 2007, San Jose State went 6-6 in 2008, and Miami of Ohio went 6-6 in the 2007 regular season, but lost the MAC Championship Game to finish 6-7. The Cowboys were certainly in a league of their own when it came to winning without scoring.
Posted by matt at 4:45 PM