There are exactly 3 weeks (21 days) separating us from the return of college football. And after today, we only have 4 conferences left to review. Today we focus on the WAC. It should come as no surprise what team is projected to run roughshod over the WAC this season. However, next season should be an interesting one for the league as Boise State will make the shift to the tougher Mountain West conference. As always, if you want to know more about how these projections are created, here's the link to the ACC Preview to get you started. Check back in a few days for the Conference USA Preview. 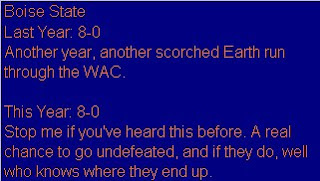 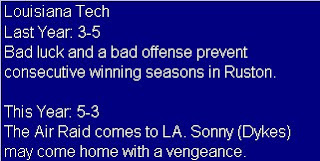 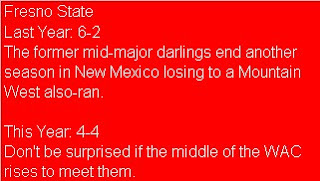 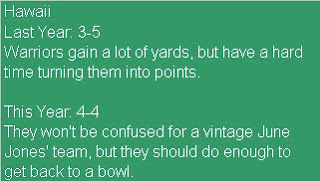 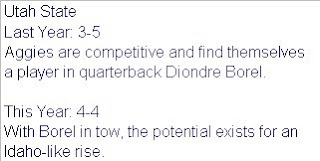 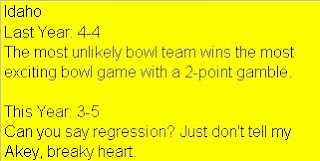 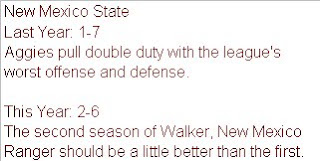 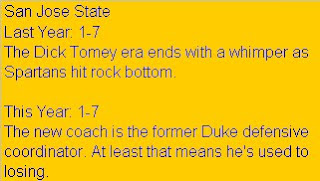 Boise State
Coming of Age
Boise State has been a successful program for more than a decade now, posting 12 consecutive winning seasons and playing in bowl games 10 of the past 11 years. However, their ascension as a true national power is much more recent, and has coincided entirely with Chris Petersen becoming the head coach. Here is how they have performed against teams from BCS conferences over the past 12 seasons, 4 under Petersen, and 8 under Dan Hawkins (now head coach at Colorad0, at least for the time being) and Dirk Koetter (former head coach at Arizona State).

Under Petersen, the Broncos have double the wins over BCS conference teams in half the time. In addition, half of their wins have come away from the friendly confines of the smurf turf, and all have come against teams that won at least 10 games. Contrast that with the previous 8 seasons where the Broncos won 2 games against BCS conference foes. Those wins came in 2004 against a decent Oregon State team (finished 7-5) and an average Iowa State team in 2002 (finished 7-7). In addition, not only were the Broncos winless away from home, they were hammered by the opposition half the time. In 4 of their 8 road games, they lost by 7 points or fewer (average loss by 4.8 points). In the other 4 road games, they lost by an average of 28 points.


Fresno State
An Undeserved Rep
In the first game of the 2001 football season, an unheralded Fresno State team led by senior quarterback David Carr upset Colorado in the Jim Thorpe Classic in Boulder, Colorado. That Colorado team would go on to win the Big 12 and play in the Fiesta Bowl. The next week, those same Bulldogs hosted preseason darling Oregon State, and pounded the Beavers by 20. For good measure, they continued their giant-killing ways the next week, traveling to Wisconsin and beating the Badgers. Fresno State was David in the college football world, a young upstart chap, who would no doubt, soon be king. To this day, when Fresno State is mentioned on any college football pregame or preview show, the term giant-killer is often bandied about. But have the Bulldogs really been giant-killers? People often forget that while the Colorado win was truly a great one, Oregon State and Wisconsin did not have very good years in 2001. In fact, both had losing records. Below is a complete list of BCS conference teams beaten by Fresno State after their program-defining win over Colorado. 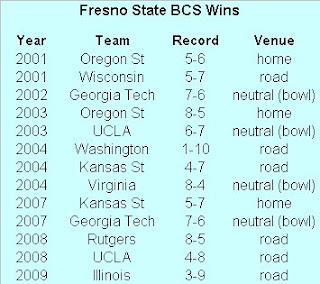 There's not a lot of beef on that list. Fresno State has beaten 13 BCS conference teams since the first game of the 2001 season. However, most have been middling wins at best. Only 5 of their victories have come against teams that finished with winning records, and only one has come against a team that finished with fewer than 5 losses. Their best win in that span is either the 2004 MPC Computers Bowl win over a solid Virginia team or the 2008 win against a Rutgers team that salvaged their season after a 1-5 start. Of course, I don't mean to totally bash the Bulldogs. 10 of their 13 wins have either come on the road or at a neutral site. Give Pat Hill credit for taking on all-comers and challenging his team, but to be a giant-killer, you actually have to slay a giant. While the Bulldogs have had some near misses (the 2005 classic with Southern Cal comes to mind), they have not beaten any elite teams. Contrast that to Boise State, which in the same time span has only beaten 5 teams from BCS conferences. However, 4 of the Broncos 5 wins have come against teams that finished with at least 10 wins and 2 have come against champions of BCS leagues.


Hawaii
Where'd the 'O' Go?
When June Jones arrived at Hawaii prior to the 1999 season, the Warriors (then known as the Rainbow Warriors) had lost 18 straight games. Jones immediately set about crafting the team in his own image, building an offense that threw early and threw often, usually with great results. The Warriors lost their opener in 1999, but won 9 of their final 12 games including the Oahu Bowl over Oregon State. Jones spent 9 seasons on the Islands, failing to win more games than he lost in a season just twice. His career at Hawaii culminated in 2007 as the Warriors parlayed a soft schedule into an undefeated record and a spot in the Sugar Bowl. While the Warriors were no match for Georgia on the big stage (lost 41-10), the season was still wildly successful. Unfortunately for Hawaii, Jones was dissatisfied with the university's commitment to upgrading facilities and left shortly thereafter for another rebuilding project at SMU. The Warriors have floundered in his absence, going 7-7 in 2008 and 6-7 in 2009. Perhaps, even more alarming than their slide in wins and losses has been their offensive tumble. 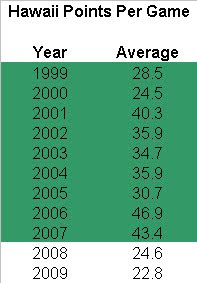 Hawaii's offensive output in 2008 was just a shade better than their worst season under Jones. They followed that up with an even lower offensive performance in 2009. The Warriors are a far cry from the offensive machine that averaged over 30 points per game for 7 consecutive seasons.


Idaho
The Progression of Nate Enderle
One of the biggest reasons for Idaho's jump from WAC afterthought (3-21 combined record in 2007 and 2008) to 8-win bowl team has been the progression of quarterback Nate Enderle. As the table below illustrates, Enderle has improved his rate stats with each passing (no pun intended) season.

Not coincidentally, the Idaho offense has also improved. Based on SDPI numbers, the Vandals were 8th in the WAC (a 9-team league) in offense in both 2007 and 2008. With Enderle's significant improvements, the Vandals were 3rd in the league in offense in 2009. That's vital because improvements on defense have not been as forthcoming. The Vandals were 6th in the WAC in defense in 2007, dead last in 2008, and 8th in 2009. Enderle's true level of performance is probably somewhere between his average 2008 and outstanding 2009 numbers. In other words, don't expect another significant jump where he completes 70% of his throws and averages 11 yards per pass.


Louisiana Tech
Got a Livas One
The Bulldogs have a very special player in lilliputian receiver Phillip Livas. During his 3 years in Ruston, Livas has been a beast on special teams. His career punt return average is 12.94 yards and his career kickoff return average is 26.33. He has brought 3 punts and 3 kickoffs back for touchdowns in his career, giving him 6 total special teams touchdowns. Ironically, he has 7 offensive (rushing and receiving) touchdowns in his career.


New Mexico State
Tough Transition
The New Mexico State Aggies didn't experience any overall success under former disgraced Kentucky coach and Mike Leach tutor Hal Mumme. The Aggies were 11-38 under Mumme's reign (2005-2008), which is actually worse than they were in the previous 4 seasons under Tony Samuel (20-27 from 2001-2004). However, if there is one thing the Aggies did well under Mumme, it was throw the forward pass. Take a look at the table below.

The Aggies completed nearly 2/3rds of their passes in Mumme's tenure. If we remove his first season, during which time he had to totally revamp the offense, that completion percentage jumps to 68.5%! Mumme's teams also scored often via the pass. His 4 teams averaged 26 touchdowns passes per season, and again if we remove the first year, those numbers jump to 29 per season. Suffice it to say, the Aggies had a little drop off in the passing game in 2009. Under new coach DeWayne Walker, the Aggies completed less than half their passes and managed only 6 scoring tosses all season. Of course, Walker did win 3 games in his first season at the helm (Mumme went winless in his first), and also beat New Mexico (something Mumme did not accomplish in his tenure).


Nevada
Running Down a Dream
Last season, Nevada did something rather unprecedented in college football. They produced three 1000-yard rushers. Of course, this doesn't mean they were the best rushing team of all time, or even last season. It's more of a statistical anomaly. Nevada rushed for nearly 4500 yards as a team last season. What was unique about last year's team was not the total amount of yards, but the distribution of those yards, and the football fan's natural obsession with milestone numbers. If instead of three 1000-yard men, the Wolfpack had produced a pair of 1000-yard rushers and four players who gained at least 400 yards, the net results would have been about the same. However, it is interesting that Nevada produced three 1000-yard backs after only producing 4 over the previous 5 seasons (2004-2008).


San Jose State
Running Down a Dream Part II
Dick Tomey took over the San Jose State Spartans prior to the 2005 football season and led them to their first bowl game since 1990 in 2006. Fresh off a 9-win season, one would assume the Spartans would play in a few more bowls before Tomey retired. Alas, while the Spartan defense played well (by WAC standards) the next two seasons, the offense imploded and the team went 5-7 and 6-6 with no bowl bids. The defense proceeded to implode in 2009 and the offense continued to get worse resulting in a 2-10 campaign. Tomey stepped down in the midst of the lost season. Perhaps the biggest culprit in San Jose State's offensive ineptitude has been the disappearance of their running game.

In 2006, Yonus Davis rushed for over 1000 yards at over 6 yards a pop. Since then, the Spartans have struggled to find a feature back or come close to having a top-flight running game. While the yards per rush compiled by Davis and Muldrow in 2008 and 2009 look gaudy, keep in mind that the median yards per rush average by the top-100 running backs has been between 5.36 and 5.84 yards since 2006. Thus Davis and Muldrow were actually between .75 and a whole yard below average when toting the ball in 2008 and 2009.


Utah State
Logan's Run
For Utah State, a team without a winning record since 1997 and owner of just a pair of bowl berths since 1961, there is reason for optimism heading into 2010. The man who could lead the Aggies to their first postseason appearance since 1997 is quarterback Diondre Borel. Borel came to Utah State as a wide receiver, but was converted to quarterback prior to the 2008 season. He split time with senior Sean Setzer in 2008, but managed to wrest the job away by midseason. While his passing numbers were relatively mild (56% completion, 11 touchdowns, 10 interceptions), he added another dimension on the ground, leading the Aggies with 627 yards rushing. Borel improved substantially last season, completing 58.5% of his passes, while throwing 17 touchdowns and just 4 interceptions. He also added 458 yards on the ground, cementing his status as a solid dual-threat quarterback. While one could expect his interception numbers to total more than 4 in 2010 (his completion percentage does not depict a pinpoint passer), Borel should be able to keep the Aggies in most of their WAC games with his arm and legs.
Posted by matt at 2:28 PM