Only one week to go until the college football season starts and all our mortal pains are over (or something like that). Today's preview is the second to last one Statistically Speaking will have (another indication of how close we are to the beginning of the season). We'll examine the MAC, the Big 10's little brother. If you want a primer on how these numbers were derived, please read the ACC Preview. Check back in a few days for the last of the season previews, when we examine the Sun Belt. 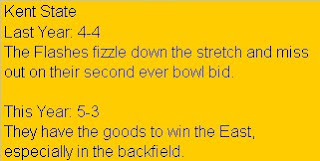 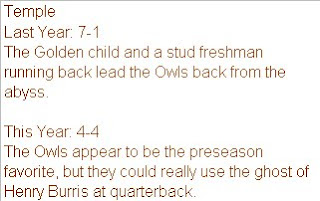 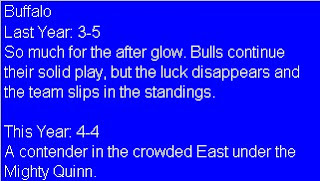 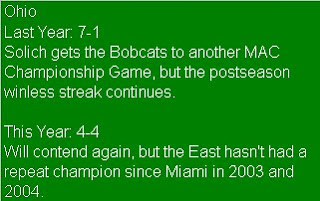 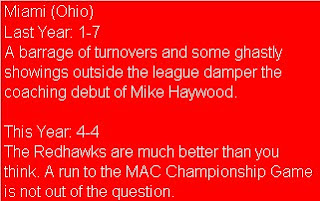 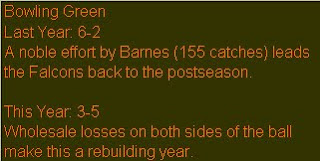 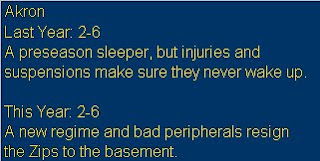 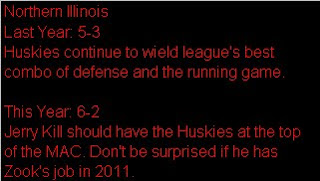 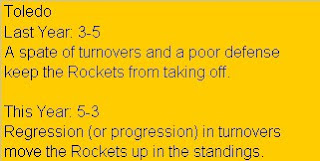 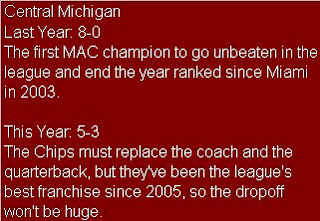 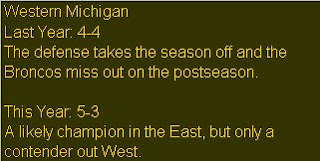 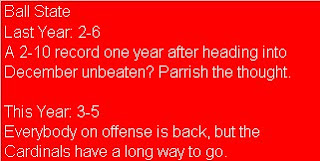 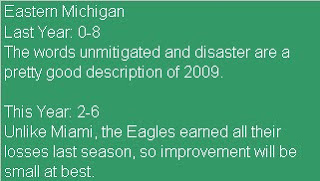 Akron
The Disappearing Akron Defense
In 2005, Akron surprised many college football fans (or at least MAC diehards) by winning their first, and thus far only conference title. Head coach JD Brookhart was in his second season and the Zips looked prime to compete in a MAC that was in flux following the departure of star quarterbacks like Ben Roethlisberger and Bruce Gradkowski in the surrounding seasons. Unfortunately, in the next 4 years, the Zips failed to produce a winning record in the league or overall and Brookhart was given his walking papers. He can lay the majority of the blame at the feet of a defense that has been in decline since their surprise championship in 2005. 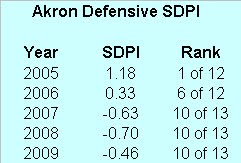 During their championship season, the Zips had the best defense in the MAC. They have seen that defense drop to the bottom third of the league in the last half decade. If new coach Rob Ianello has designs on reviving the Zips, he should start on that side of the ball.


Bowling Green
Fred-Ex
If you follow college football somewhat closely, you probably know who Freddie Barnes is. If you got off work early to watch the Humanitarian Bowl this season (like I did), you definitely know him (he hauled in 17 balls for 219 yards and 3 touchdowns in that game). Barnes set the NCAA record for receptions in a season with 155. Even more amazing is the fact that he caught more balls than 8 entire teams! The table below lists the bottom 10 teams (those ranked 111th-120th in the NCAA) in receptions last season, along with the numbers put up by Mr. Barnes. 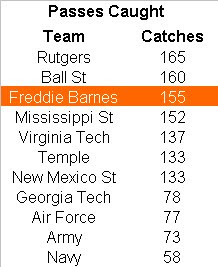 Buffalo
Turn(er) Around
To say Turner Gill accomplished a great deal in his time at Buffalo is putting it mildly. In 2008, Gill led the Bulls to their best season since returning to IA football in 1999 with an 8-6 record and a MAC Championship. It's hard to put in perspective just how impressive that feat is, but I'll try. A pair of gentlemen coached the Bulls upon their return to IA prior to Gill, Craig Cirbus and Jim Hofher. Combined, these men coached the Bulls for 7 seasons. Their victory total? 10. Gill nearly matched their 7-year run in a single campaign!


Kent State
Run Tell That
Quick, who is Kent State's head coach? One Doug Martin coaches the Golden Flashes. Martin has been head coach at Kent State for 6 seasons, and while he may not be known nationally, he has done a pretty good job at a school with very little in the way of tradition. Martin has yet to have a winning season as coach, but he did guide the Flashes to bowl eligibility in 2006 (6-6 record). In addition, Martin is tied with one very prestigious former coach for the most seasons with at least 5 wins. 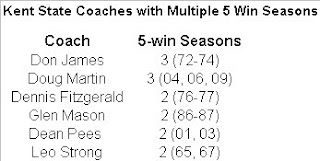 Miami (Ohio)
Turnovers Key Turnaround
Last season Miami of Ohio won just a single game despite actually outgaining their league opponents by about 35 yards per game. In 2008, they won also won just once against IA teams. The reason for their pathetic performance the past two seasons has been their proclivity to turn the football over. Only two teams in the entire country have turned the ball over more than the Redhawks have in that span.

Ohio
Return in the MAC
Ohio wide receiver LaVon Brazill had a fine season returning punts in 2009. He led the nation with 3 punt return touchdowns. He's coming back for his senior season in 2010. Is he poised for even bigger things? To find out, I looked at all punt returners who scored at least 3 touchdowns in any season since 2004 and returned to school the following year. That list includes 7 gentlemen in addition to Brazill. The table below lists each player's performance in the year they scored at least 3 touchdowns on punt returns, and their performance the following season. 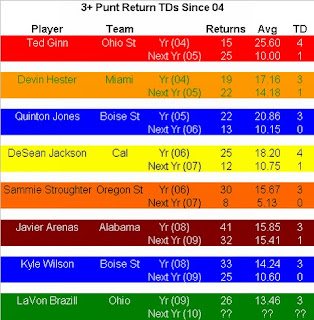 There are some pretty famous names on this list (Ginn, Hester, Jackson, and Arenas) along with 3 players from the Pacific Northwest who many casual fans may not be familiar with (Jones, Stroughter, and Wilson). Without exception, each player declined in both their punt return average and their number of touchdowns. In fact, no player scored more than a single touchdown via punt returns the following season. 5 of the 7 players also had fewer punt returns in the following season, indicating that their opponents likely altered their punting strategy somewhat, perhaps by kicking away from them. Brazill is unlikely to repeat his touchdown performance in 2010, not because of any deterioration of his skills, but because of regression's magnetic pull and Ohio's opponents' strategy.


Temple
Piercing the Line
Perhaps one of the biggest reasons for Temple's resurgence last season under Al Golden was the play of freshman running back Bernard Pierce. After amassing just 13 carries in the Owls first 2 games, Pierce conflagrated the MAC over the next 2 months. In the next 8 games in which he saw substantial playing time, Pierce averaged 155 yards on the ground and scored 15 rushing touchdowns while averaging 5.9 yards per rush. Not coincidentally, the Owls went 8-0 in those games. For the season, Pierce ran for 1361 yards (18th nationally) at an average of 5.77 per rush and scored 16 times on the ground. What can we realistically expect from Pierce as an encore? Between 2005 and 2008, only 3 freshman running backs finished in the top-20 nationally in rushing yards. The table below lists them, their performance as freshman, and their performance as sophomores.

All 3 freshman again topped 1000 yards as sophomores and remained north of 5 yards per rush. However, Sutton and Hill saw significant declines in their number of carries (and in Sutton's case touchdowns) as sophomores. Sutton dealt with injuries in his sophomore campaign (and throughout the rest of his college career) and also had to deal with the loss of a record-setting senior quarterback (Brett Basanez) who matriculated after the 2005 season. Hill also dealt with injuries and the loss of an experienced senior quarterback after his freshman campaign. Fletcher was healthy as a sophomore and also returned his backfield mate, enabling him to eclipse his fantastic freshman performance. Injuries may be a concern for Pierce as well. He was injured after his first carry versus Kent State. He missed the rest of that game and the following game (the regular season finale) against Ohio. He also only carried the ball 12 times versus UCLA in the bowl. Pierce may also be hampered by the relative weakness at quarterback. Last year, Owl quarterbacks completed an atrocious 47.5% of their passes (ahead of only Georgia Tech and Army, a pair of option teams), and while improvement can be expected, it likely will not be spectacular. Still, history seems to indicate Pierce is not some one-year wonder. If he stays healthy, he should be again be one of, if not the preeminent running back in the MAC, especially with 4 returning starters on the line leading the way. It should also be noted that while Pierce was spectacular as a freshman, an amazing 3 freshmen finished with more yards than he did! Dion Lewis of Pitt finished 3rd nationally with 1799 rushing yards, Ryan Williams of Virginia Tech finished 5th with 1655, and LaMichael James of Oregon finished 7th with 1546. Barring injury (or in Williams' case a platoon and James' case off the field troubles), those 3 should be very effective in 2010 as well.


Ball State
Almost as Disciplined as a Service Academy
Prior to the 2009 season, Ball State had been on a decidedly upward trend. The Cardinals won 5 games in 2006, 7 in 2007, and 12 in 2008. They did this primarily on the arm of future NFL quarterback Nate Davis. However, another often overlooked area where the Cardinals excelled was in forcing their opponents to earn their first downs. Since 2006, only the Naval Academy has given their opponent fewer first downs via penalty. 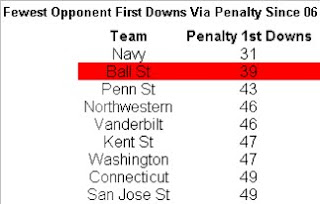 Central Michigan
Return of the MAC
Central Michigan not only won 12 games in 2010, included among them an upset over the Big 10's Michigan State, they also became the first MAC team in 7 years to end the season ranked in the AP Poll. The Chippewas ended the year ranked number 23 in the AP Poll. The MAC had not had a team end the season ranked since Bowling Green (#23) and Miami (#10) ended the 2003 season in the final AP Poll.


Eastern Michigan
Fun with Attendance Data
To say the Ron English era at Eastern Michigan began rather inauspiciously is an understatement. The Eagles did not win a single game and scored only 24 offensive touchdowns in 12 games. Those are not good numbers, but perhaps the most disappointing aspect of the season was the lack of interest in the team. The table below lists the average home attendance for the 5 IA football schools in the state of Michigan.

Now, I'm not expecting Eastern Michigan to be in the same stratosphere as a program like Michigan in terms of home attendance. However, comparable (at least in university and stadium size if not on-field success) MAC schools outdrew them by nearly 4 times as many people. The English era began with enthusiasm as over 14,000 folks showed up for their home opener against Army. However, after that game the Eagles averaged a measly 2,645 fans for their final 4 home games! To put their lowly attendance numbers into better perspective, consider that in their road game at Michigan, the Wolverines drew over 107,000 fans or more than quadruple the number of people who showed up for all of Eastern Michigan's home games combined! In addition, in their road game at Central Michigan, the Chippewas had over 26,000 fans in the stands. In their 5 home games, Eastern Michigan drew 25,080 total fans! This is not the first time the Eagles have suffered through attendance problems. They averaged under 10,000 fans per home game in both 2005 and 2007. However, with a new coach at least a little optimism, one would have thought 2009 would have seen at least marginally strong attendance numbers.


Northern Illinois
Go West Young Man
Northern Illinois last won the MAC West in 2005. Since 2005, they have still been consistent winners within the league, going 16-15 in conference play. That's even more impressive when you consider they managed only a 1-6 league mark in 2007. However, if the Huskies want to return to the MAC Championship Game in 2010, they must do a better job of winning games against their divisional foes.

Toledo
A Tale of Two Half-Decades
After the 2005 season, the Toledo Rockets could boast of a cumulative record of 57-19 in the new decade. They had won fewer than 9 games just once in the new millennium and owned a pair of league titles. Most rational folks would expect more of the same in the latter part of the decade. They would have been wrong. 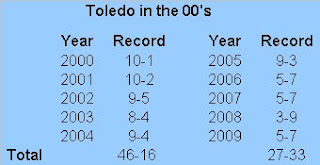 Western Michigan
They Got it Covered
In the past 4 seasons, Western Michigan has been one of the most consistently strong teams at covering kickoffs. They have allowed just one kickoff return touchdown in that span, a heartbreaking last second return by Akron in 2007 (off a free kick following a safety) that you can watch below.

Outside of that fluky play, the Broncos have been spot on at limiting their opponents starting field position on kickoffs.