Just 4 more weeks (28 days) separate us from the return of college football. In the interim, please enjoy this Pac-10 preview. The projection system sees a logjam at the top of the conference, with 4 teams projected around 6 wins, and a 5th projected just below them with 5 wins. It looks like the conference will be without a truly dominant team in 2010. While that may be bad new for the league's national reputation, it is certainly good news for those who enjoy a good conference race. As always, if you want to know more about these numbers, here's the link to the ACC Preview, with a little info about how the numbers are calculated. Check back in a few days for the SEC Preview. 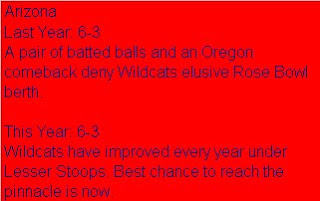 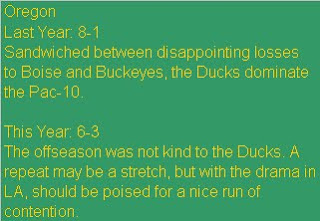 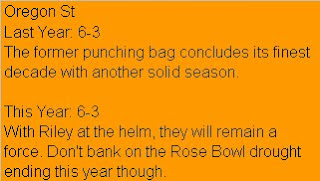 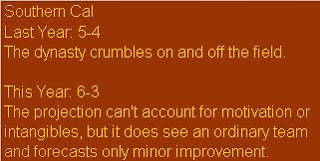 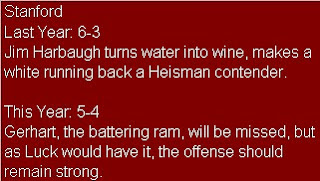 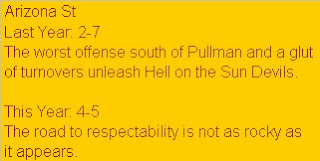 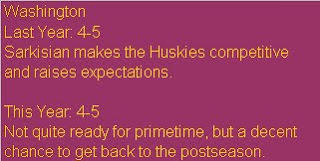 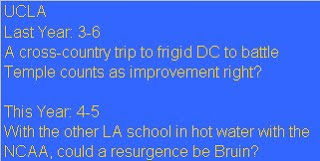 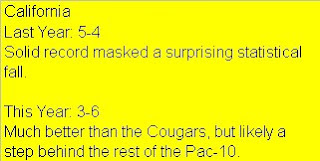 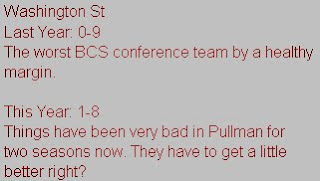 Arizona
Familiarity Breeds Something
Mike Stoops has done a lot of good things in his 6 years in Tucson. He has taken a program that had steadily declined under John Mackovic and gotten it to the precipice of contending for the Pac-10 title. However, one thing Stoops has not been able to do with any consistency is win outside the conference, either straight up or versus the spread.

The non-conference portion of the table does not include Arizona's battles with non-IA opponents under Stoops (such as Northern Arizona and Stephen F Austin), against whom Stoops is unbeaten. It is an interesting split, especially considering the Wildcats have covered nearly 60% of the time against conference foes under Stoops versus just about 36% against non-conference foes. Keep that in mind when the Wildcats travel across the country to open the season against Toledo.


Arizona State
Blackjack
I was having a tough time trying to come up with some statistical fact or minutiae about Arizona State. And then it hit me. When I gamble, my favorite table game to play is Blackjack. Of course, the object in Blackjack is to beat the dealer by having your cards add up to 21 without going over, or 'busting'. Conversely, for Arizona State in 2009, if their points added up to 21 or fewer, they busted. The Sun Devils eclipsed 21 points just 4 times all season. They won all 4 of those games. 8 times, they scored 21 or fewer. They lost each of those games.


California
Smoke and Mirrors
The Cal Golden Bears accomplished a somewhat rare feat in 2009. They managed to post a winning conference record (5-4) despite being outscored by 48 points over the course of the Pac-10 season. Since 2006, only 7 BCS-conference teams have been outscored in league play and posted a winning conference record. Cal had by far the worst scoring margin of any team holding this achievement. 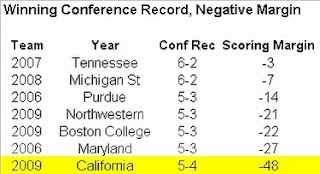 This should not come as good news to Cal fans heading into 2010, or for that matter fans of Boston College or Northwestern. The other 4 teams on this list all declined by at least 2 games in conference play in the season following their 'lucky' season. Tennessee declined by 3 games in the next season. This is just a little something to keep in mind if you get the misguided notion to bet on Cal to win the Pac-10 in 2010.


Oregon
On the Rebound
The Oregon Ducks began the 2009 season with a dismal showing in front of a national audience, losing 19-8 to mid-major darling Boise State and playing much worse than the final score indicated. The Ducks got to their feet quite nicely though, losing only once more over the course of the regular season, thus winning the Pac-10 title and a coveted Rose Bowl bid. In doing so, they became the 8th team in the BCS-era (since 1998) to lose their opener and play in a BCS Bowl Game. 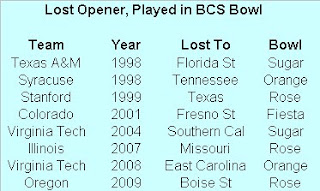 Several things about these teams. Half of the teams (Texas A&M, Syracuse, Virginia Tech in 2004, and Oregon) lost their opener to teams that would also play in BCS bowl games. In fact, Texas A&M and Syracuse dropped their openers to the two national finalists in 1998, and Virginia Tech fell to the eventual national champion in 2004. In addition, Virginia Tech circa 2007 is the only one of these 8 teams to win their BCS Bowl Game.


Oregon State
A Dam Good Decade
Mike Riley doesn't get near the credit he deserves. For starters, most causal college football fans probably do not know who he is. Since you are reading this blog, its a good bet you do. He is the current and former head coach of the Oregon State Beavers. Riley coached the team in the 1997 and 1998 seasons before leaving to coach the San Diego Chargers. He returned to Corvallis in 2003, and has been the coach ever since. Nestled far away in the Pacific northwest, many do not know just how bad Oregon State football was before Mile Riley arrived. In 1969, the Beavers went 4-3 in the Pac-8 (the Pac-10 sans the Arizona schools). That would mark their last winning mark in conference play until the year 2000! In fact, the Beavers won more conference in the past decade than they did in the previous 30 years!

Southern Cal
Draft Dodgers
Southern Cal hit the skids (relatively) in 2009, failing to log 10 wins for the first time since Pete Carroll's first season guiding the team in 2001. While the team may have struggled on the field, NFL talent evaluators still believed the Trojans had a robust number of pro prospects. 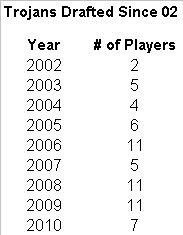 Stanford
Putting the 'O' in Stanford
The key to Stanford's success since Jim Harbaugh took over has been their increased ability to put points on the board. In 2006, the season prior to Harbaugh's arrival, the Cardinal averaged 10.6 points per game and topped 30 points just once. In Harbaugh's first season (2007), the Cardinal nearly doubled their offensive output to 19.6 points per game and scored 30 or more three times. The Cardinal improved again in 2008, averaging 26.3 points per game, and again scoring 30 or more three times. This past season, Stanford averaged 35.5 points per game, and scored 30 or more 8 times. The loss of stud running back Toby Gerhart will hurt, but with a talented player like Andrew Luck under center, the Cardinal should still be capable of putting points on the board.


UCLA
Man Up
One of the downsides (from a fan perspective) of the addition of the 12th game in college football is that teams tend to use that game to beat up a hapless non-IA foe. Since 2006, only 6 teams from BCS-conferences have refrained from playing a single non-IA opponent.

It seems like the Pac-10 has done the best job of refusing to play those body bag games. As you can see from the above table, 4 teams from that conference have yet to play a single non-IA team since 2006. In addition to that, 2 teams (Oregon and Washington State) have played only a single non-IA team and no team has played more than 3 games against non-IA foes. The table below confirms that assumption I made a few sentences ago.


Washington
The Point of No Return
For the first time in a long time, there is a great deal of optimism emanating from Seattle. After a 'breakthrough' 5-7 season under rookie coach Steve Sarkisian, there is hope that the Huskies can end their 8-year bowl drought in 2010. One area where they can certainly improve and make the path to the postseason a little easier is in kickoff returns. 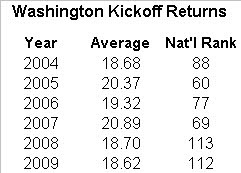 Exactly once in the past 6 years has Washington finished with an average kickoff return game (2005). In fact, the past 2 seasons, they have been among the worst teams in all of Division IA in kickoff returns.


Washington State
Worst of the Worst
It's not secret that Washington State has been a very bad team the past 2 seasons. Even a casual college football fan could tell you that. But did you know that in 2008, they were the worst BCS conference team in the BCS era (since 1998), at least in conference play. 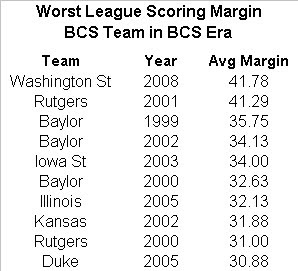 Yes, the Cougars from 2 seasons ago barely eke out the number one position over Greg Schiano's first Rutgers team (maybe there is hope, after all he's done pretty well the last few years), a team that famously lost 80-7 to West Virgina (Rice Rod's first Mountaineer team that went 3-8). And where do last season's Cougars rank on this list? Just outside the top (or bottom) 10. They were outscored by 30.78 points per game against Pac-10 foes last season.
Posted by matt at 3:23 PM