The beginning of the regular season is upon us. Just 4 more days until kickoff. Today we preview our final conference, the Sun Belt. If you want more details on where these projections come from, take a look at the ACC Preview. Check back around Wednesday for the inaugural edition of the 2010 Fab Five where I tell you who to bet on in the upcoming week. Enjoy! 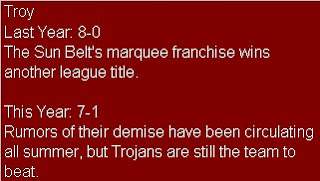 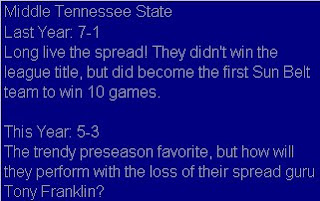 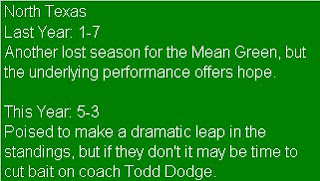 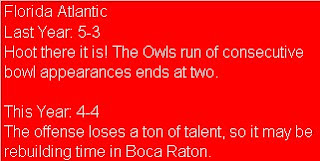 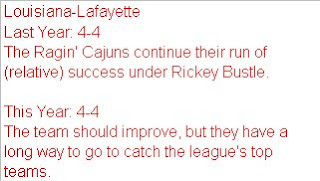 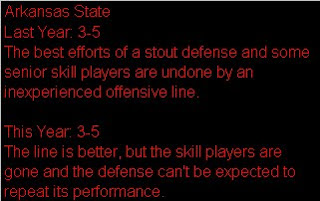 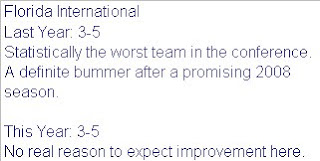 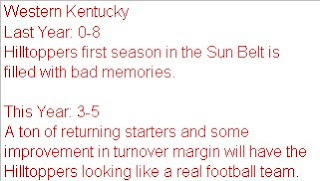 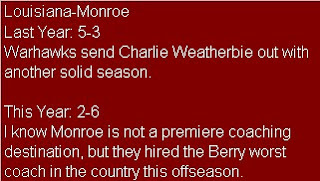 Arkansas State
Pwning Patsies
Over the past 2 seasons, the newly christened Red Wolves have been a disappointment in the Sun Belt, going 10-14 overall (7-8 versus the conference) after beginning the 2008 campaign with a win versus Texas A&M in College Station. However, the Red Wolves have given their fans reason to cheer very loudly in 2 games. Against the 2 non-IA teams they have faced (Texas Southern in 2008 and Mississippi Valley State in 2009), the Red Wolves have won by a combined score of 144-10. They absolutely destroyed the Tigers from Texas Southern, rolling up 83 points (that's 11 touchdowns and 2 field goals) in their 73-point win. They took things a little easier on the Delta Devils in 2009, content with merely shutting them out 61-0 (9 touchdowns and 2 missed extra points).


Florida Atlantic
Missing a Beat
Florida Atlantic begins the 2010 without the most decorated passer in the team's brief history. Rusty Smith departs after throwing for over 10,000 yards and leading the Owls to a pair of bowl wins in 2007 and 2008. How will the Owls perform without him? Lucky for us (and unlucky for Smith), we can gleam a little into how they may perform by looking at the final few games they played last season. Smith was lost for the season in the team's 4th league game against Middle Tennessee State. Jeff Van Camp replaced him and played the rest of the way. Van Camp returns for his senior campaign. So how did the Owls perform when Van Camp replaced Smith?

Against league foes, the Owls offense declined by over 100 yards per game with Smith out of the lineup. That's a pretty significant decline. However, even if we just took the last 5 games and prorated that average to cover the whole season, Florida Atlantic would have still ranked 5th in the conference in offense, indicating an average performance. While the Owls will certainly miss Smith and his exploits, the offense is unlikely to crater and join the likes of Western Kentucky and Arkansas State at the bottom of the league.


Florida International
Protecting the Quarterback is Optional
The Panthers, who began play in 2002 and moved up to IA in 2005, have not been nearly as successful as their rivals at Florida Atlantic. The Panthers have yet to have a winning season (topping out at 5-6 in both 2002 and 2005) and suffered through a stretch from 2006-2008 where they went 1-26. Hey, no one said life is easy right? The Panthers have also been awful at protecting their quarterback. Since 2006, the Panthers are one of only two teams to allow their quarterback to be sacked at least 30 times in each season. The other is their Sun Belt brethren at Arkansas State.


Louisiana-Lafayette
The Vanishing Running Game
On the surface, 2009 seemed like another successful season for the Ragin' Cajuns. Louisiana-Lafayette won 6 games for the 4th time in 5 seasons, and had they won their season finale versus Troy, they likely would have played in their first ever bowl game. However, if you delve a little deeper in the numbers, it becomes clear that the Ragin' Cajuns had their poorest offensive season in recent memory.

The Cajuns rushing attack, their bread and butter under coach Rickey Bustle, plummeted from one of the best in the nation to one of the worst. Their running game will require drastic improvement for them to once again be a contender in the Sun Belt.


Louisiana-Monroe
SEC Scare Tactics
The Warhawks finished the 2009 season with a bowl-eligible 6-6 record, marking the second time in 3 seasons they finished with 6 wins. Head coach Charlie Weatherbie's 7-year run as head coach will likely not be remembered by many folks outside of Monroe, Louisiana. However, considering the situation he stepped into, his charges performed admirably. Weatherbie was hired after spring practice in May of 2003, and as you may expect, suffered through a tough first season, going just 1-11 overall and 1-6 in the Sun Belt. Since that tough first season, things went much better. His teams compiled a 24-19 record in the Sun Belt, posting four winning conference records in 6 years and tying for the league title in 2005. Yet, perhaps the most impressive feat his team's accomplished was a stretch from 2006-2008 where they nearly upset 3 SEC teams on the road! In 2006, his charges visited Kentucky in late November as 20-point underdogs and lost by 2 (they even outgained the Wildcats by nearly 50 yards). The next season, the Warhawks visited Alabama and first-year head coach Nick Saban. The Warhawks took advantage of 4 Alabama turnovers and won 21-14. Finally, in 2008, his team visited the Arkansas Razorbacks in their second game of the season. Again, they faced a decorated coach in his first season at a new locale in Bobby Petrino. A late Razorback touchdown allowed them to escape with a 28-27 win. Though they only won one of the 3 games, Louisiana-Monroe acquitted themselves very well against some strong competition.


Middle Tennessee State
When You're Hot You're Hot
Last season, Middle Tennessee State became the first Sun Belt team to win 10 games, finishing the year with a sterling 10-3 record. However, despite their 10 wins, the Blue Raiders failed to win the Sun Belt thanks to a loss to eventual champion Troy. The loss to Troy, and their other two losses (to Clemson and Mississippi State), were not very competitive. The Blue Raiders lost those 3 games by an average of 22.7 points. In fact, if you look at the Blue Raiders splits by their offensive performance in their wins and losses, the results are amazing.

The Blue Raiders averaged 4.5 offensive touchdowns in their wins, but failed to even average one per game in their losses. Part of this split may involve the schedule. Two of their three losses (Clemson and Troy) came to bowl teams, while the third came against a BCS-conference team (Mississippi State). Outside of the bowl game against Southern Miss, the Blue Raiders did not face another team that finished with a winning record.


North Texas
God Blessed Texas (By Putting Western Kentucky on the Schedule)
Since Todd Dodge arrived in Denton, Texas prior to the 2007 season, the Mean Green have been one of the worst teams in IA football. Their 3-year record is just 5-31, and even against the Sun Belt, they are only 2-20. However, there is one team North Texas has had unbridled success against--Western Kentucky. The Mean Green have faced the Hilltoppers thrice (once per season) and are 3-0 against them. Of course, that means they are just 2-31 in their other 33 games.


Troy
Never Scared
Troy has been the preeminent Sun Belt program over the past 4 seasons, winning or sharing every conference title since 2006 and posting a cumulative 26-3 record in the league. While the Trojans have been less successful outside the league, going just 7-15 against non-conference foes in that same span, they haven't dodged any of the big boys. Here's a list of the BCS-conference teams Troy has visited in the last 4 years.
@ Arkansas (twice)
@ Florida (twice)
@ Florida State
@ Georgia
@ Georgia Tech
@ LSU
@ Nebraska
@ Ohio State
@ Oklahoma State
While the Trojans are 0-11 in those games, they have fared much better ATS, managing a 6-5 record versus the spread.


Western Kentucky
Improvement Can be Measured in Micrometers
2009 marked the inaugural season of play in the Sun Belt conference for the Western Kentucky Hilltoppers. To put it mildly, things could have gone better. The Hilltoppers went winless in Sun Belt play, and thanks to a non-conference schedule that included dates with bowl teams Tennessee, South Florida, and Navy (as well as a loss to IAA Central Arkansas), the Hilltoppers finished the entire season without a win. However, the defense did show some signs of improvement in the second half of the conference season. In their first 4 league games, the Hilltoppers allowed an average of 537 yards per game to their opponents. Over their last 4 conference games, the Hilltoppers allowed only 398 yards per game. Of course, when an improvement is this profound it may help to examine the schedule to see if it eased up any. Thankfully for you dear reader, I have done just that. The table below hearkens back to a concept I examined in the SEC preview--the concept of net yards. In that instance we examined the Auburn offense to see how well they performed versus the average or expected defensive performance of their opponent. In this instance we are looking at how well Western Kentucky's defense performed based on the average of their opponent's offense. Their opponent's offense in this case is conference games only. 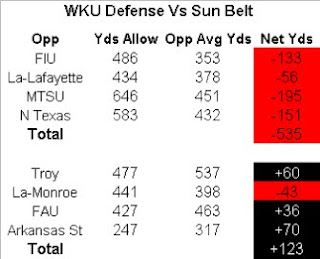 As you can see, this improvement was not an instance of the schedule easing up. The Hilltoppers did not have a single 'above average' performance in their first 4 league games. In their last 4 league games they have 3 'above-average' performances, and even their worst performance was better than any from their first 4 games. Western Kentucky will be breaking in a new coach this season (Willie Taggart replaces David Elson) and the road to respectability in IA is a long and arduous one, particularly in the Sun Belt, but barring some unforeseen circumstances, the Hilltoppers will have 8 of their top-10 tacklers back from a defense that improved as the season progressed. They certainly won't win the Sun Belt in 2010, but they should be much more competitive.
Posted by matt at 1:43 PM