Two weeks exactly (14 days) until the 2010 football season officially begins. Today's preview will be very short as we turn our focus to the three remaining independents in major college football. For a primer on these numbers, feel free to read the ACC Preview. Check back in a few days when we preview the MAC. 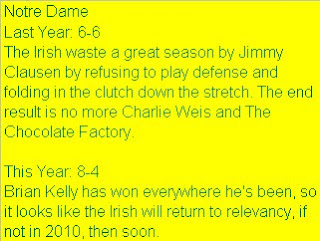 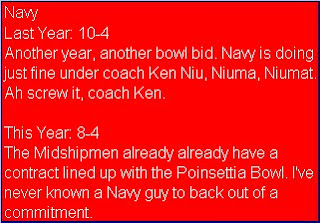 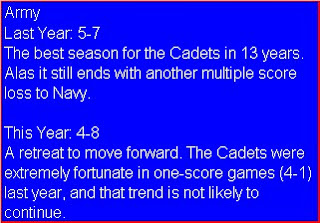 Army
First in Service, Last in Football
1996 was a good year for the Cadets. It marked the last time Army finished the year with a winning record. It was also their last bowl appearance and the last time they defeated both Air Force and Navy in the same season. While Air Force and Navy have played in 7 bowls apiece (7 straight for Navy and 3 straight for Air Force) since then, Army had their best season in 2009 when they finished 5-7. This disparity has been reflected in the annual tilts with their service academy rivals.


Navy
Lords of Discipline
So, let's say you're a service academy trying to compete in IA football against schools that have better athletes, bigger stadiums, and better infrastructure. Where do you start? Besides hiring a good coach (check) and employing an exotic offensive scheme (check), you could also cut down on your penalties. The Naval Academy has been the model of consistency when it comes to limiting their penalties over the past 6 seasons. 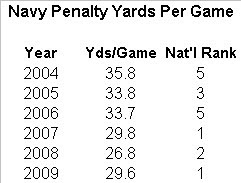 The Midshipmen have yet to finish worst than 5th in the nation in fewest penalty yards per game since 2004. It's yet another reason why this undermanned program has gone to 7 straight bowl games.


Notre Dame
Wake Up the Uh-Ohs
As a college football fan there's no team I hate more than Notre Dame. With their own TV network, air of superiority, cushy schedule, and automatic BCS bid, I enjoy seeing them fail. Unfortunately, with new coach Brian Kelly, good times appear to be on the horizon. However, in the spirit of kicking them while they're down, what follows is a list of teams with a better record than Notre Dame since 2005 (Charlie Weis' first year in South Bend). For reference, the Irish have gone 35-27 (.565 win %) since 2005. It's not a complete list by any means, but more of a 'did you know?' list. Notre Dame haters, enjoy. 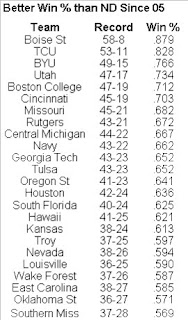