The Predictive Powers of Pythagoras

Regardless of what any talking head or former player may say on ESPN regarding intangibles and heart, team success is a function of the points they score and the points they allow. With that in mind, I want to take a fresh look at the Pythagorean Theorem and its predictive powers in college football. I've looked at the Pythagorean Theorem on this blog before. In fact, in my very first blog post nearly seven years ago (time flies), I accurately surmised that the 2005 Tennessee Vols were not national title contenders despite their top-5 preseason ranking. For those who don't know what the Pythagorean Theorem is (at least as to how it relates to sports), here's a snippet from that first post:

'In 1980 noted baseball analyst and the founder of sabermetrics, Bill James, developed a theory for predicting a team's winning percentage based on the number of runs a team scored and allowed. He called it the Pythagorean Theorem of baseball and it looked something like this:

The resulting ratio was a team's estimated winning percentage. Over the course of a 162 game season the Pythagorean Theorem predicted the final record for most teams within three or four games of their actual performance. The Pythagorean Theorem has application beyond baseball (and some triangles I hear). It could also be applied to predict a football team's actual performance.'

The other day I was brainstorming ways to make the Pythagorean Theorem more accurate. Football has a unique scoring system. Touchdowns are worth six points, field goals three, and safeties two. In addition, after touchdowns, teams can attempt to kick for one point or cross the goal again for two additional points. By contrast, in baseball and hockey, scoring events, runs and goals, are worth the same amount each time. Basketball is a little more complex, with free throws worth one point, field goals worth two points, and shots behind a certain arc worth three points. Basketball also has more scoring events than baseball and hockey. With that in mind, I wanted to look for a scoring event in football that is analogous to a run in baseball or a goal in hockey. Its actually pretty easy to find. Offensive touchdowns. Teams score offensive touchdowns at about the same ratio that teams score runs in baseball and goals in hockey. In addition, offensive touchdowns help us get rid of some of the statistical 'noise' generated during a football game. Field goals (both for and against) are heavily dependent on one individual player in a sport where team play matters most of all. Special teams and defensive touchdowns, while they play a huge role in the winner of an individual game, do not have a great deal of predictability going forward. Notice I said 'some' of the noise, but certainly not all. Defensive and special team ability can make offensive touchdowns easier by setting up the offense with a short field. Still, ignoring all scoring plays except for offensive touchdowns should give us a good idea about a team's strength.

We'll call the resulting record a team's Adjusted Pythagorean Record (or APR). I used 2.37 as the exponent because research has shown it makes the resulting ratio a more accurate predictor.

Now lets take a look at the Adjusted Pythagorean Theorem in action.

In 2007, Oklahoma State enjoyed a rather middling season in the Big 12. There were some highlights of course. They beat Nebraska in Lincoln for the first time since 1960, upended a Kansas State team ranked in the top-25 at the time, and gave Texas a run for their money in Stillwater. They were also trounced by Oklahoma and beaten by Kansas in Stillwater for the first time since 1995. All in all, the Cowboys went 4-4 in the Big 12. How did they do according to the Adjusted Pythagorean Theorem? Well, in their eight conference games, they scored 35 offensive touchdowns. Not bad. That tied for the third highest number in the conference. Unfortunately, teams also scored 35 touchdowns against their defense (tenth in the conference). All in all, the Cowboys record based on their offensive touchdowns scored and offensive touchdowns allowed was 4-4. And lo and behold, that was their record. Of course, this is just one cherry picked example. the Adjusted Pythagorean Theorem rarely hits the nail directly on the head. However, it does usually correctly predict a team's record within one game of their actual record. Since 2007, the Adjusted Pythagorean Theorem predicted each team's conference record within one game for nearly two-thirds (386 of 582 team seasons or 66.3%) of all teams. So if the Adjusted Pythagorean Theorem does a pretty good job of predicting a teams record based solely on how many offensive touchdowns they scored and allowed, what happened to those teams that significantly over or underperformed their APR? I thought you might ask that. To answer that question, I looked at all teams from 2007-2010 with a conference record at least one and a half games different (either better or worse) than their record as predicted by the Adjusted Pythagorean Theorem. I then looked at how they did in conference play the following season. And now I will share with you the results. As with the previous two blog entries, I have separated BCS and non-BCS conference teams to see if there appear to be any differences. First off, the BCS conference teams that exceeded their APR. 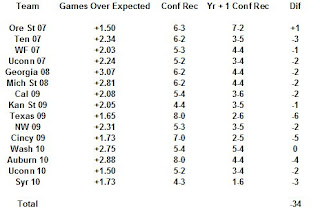 Now the BCS conference teams that underperformed their APR. 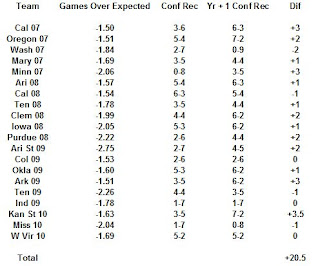 Now the non-BCS conference teams that exceeded their APR. 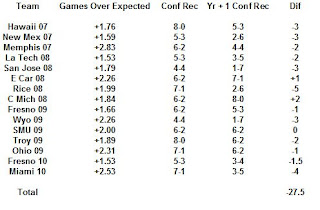 Now the non-BCS conference teams that underperformed their APR. 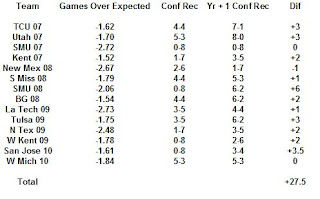 Six BCS conference teams significantly underperformed their APR in conference play. Miami scored more offensive touchdowns than they allowed, yet finished with a losing record in the ACC. Perhaps Al Golden can coax a solid showing out of this under-performing group. North Carolina also scored more touchdowns than they allowed in league play, yet finished with a losing record. Larry Fedora steps into a pretty good situation assuming the NCAA investigation has run its course. In the SEC, Vanderbilt showed some moxie and was much better than their 2-6 SEC record. Could James Franklin take then to consecutive bowls for the first time ever? Texas A&M was expected to be a contender during their last run through the Big 12. A plethora of second-half collapses caused the Aggies to finish 4-5 despite scoring seven more touchdowns than they allowed. They move to an insanely tough division and must contend with Alabama, Arkansas, and LSU, but could position themselves in the middle of the division. South Florida lost seven of eight after a 4-0 start and finished tied for last in the Big East. No one would be shocked if the Bulls went from worst to first. Syracuse also drastically underperformed their expected Big East record. Syracuse probably won't be winning the league in 2012, but a return to the postseason is likely.

Five non-BCS conference teams exceed their APR in conference play. Marshall finished 5-3 in Conference USA despite allowing more offensive touchdowns than they scored. The Herd will find returning to the postseason quite challenging in 2012. UAB won three games in Conference USA despite allowing twice as many offensive touchdowns as they scored (those teams typically only win about one game). Despite the relative good fortune, the coach was still canned. New coach Garrick McGee has his work cut out for him. Northern Illinois won the MAC Championship despite posting the profile of a solid, but hardly elite MAC team. Dave Doeren deserves credit for leading the Huskies to the summit in his first season, but a repeat is highly unlikely. Arkansas State finished unbeaten in the Sun Belt and got coach Hugh Freeze a job with Ole Miss. New coach Gus Malzahn may yet make the Redwolves into a Boise State-like power, but there is likely to be some regression in his first season. And speaking of Sun Belt powers, Louisiana-Lafayette also significantly exceeded their expected Sun Belt record. A second straight bowl appearance would likely have coach Mark Hudspeth in line for some big time jobs.

Four non-BCS conference teams significantly underperformed relative to their APR in conference play. UCF followed up their top-25 final ranking in 2010 with a losing season in 2011. They'll be back at or near the top of the league in 2012. Miami of Ohio followed up their MAC Championship in 2010 with a losing season in 2011. With Temple gone to the Big East in 2012, the MAC East is wide open. Air Force scored more offensive touchdowns than they allowed, yet finished with a losing record in the Mountain West. The Falcons could be poised to take flight in 2012. And finally, Louisiana-Monroe scored more offensive touchdowns than they allowed in the Sun Belt, but finished just 3-5 in the league. With some breaks, they could overtake their in-state brethren and get to a bowl.
Posted by matt at 4:03 AM