I know a lot of regular readers were becoming worried that the offseason SDPI recaps had slowly gone the way of the buffalo. Fear not, SDPI returns! For those who don't know what SDPI is, here is the Reader's Digest synopsis. SDPI measures how many standard deviations a team is above or below average at gaining and preventing yards. Since conference play occurs in a vacuum, teams are rated against their conference mates and not against the nation at large. Since there are 11 conferences, you can look forward to 11 posts on how SDPI played out in 2011. We'll begin with the six BCS conferences and tackle those in alphabetical order before moving on to the mid-major leagues. As always, we begin with the ACC. Here's the link to last year's ACC post. 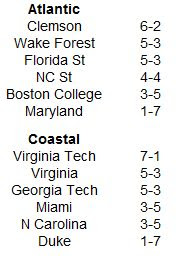 Now here are the 2011 ACC SDPI standings. The standings are sorted by division by total SDPI with ranking for each category (out of 12 teams) in parentheses. 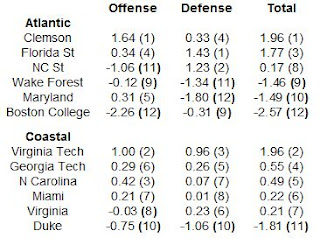 Clemson and Virginia Tech ended up in a virtual tie atop the SDPI ratings, and lo and behold both teams represented their respective divisions in the ACC Championship Game. Clemson routed the Hokies in Charlotte, winning their first ACC title since 1991. Joining Clemson and Virginia Tech in the upper-tier of the ACC was Florida State. After the Seminoles, five teams (Georgia Tech, North Carolina, Miami, Virginia, and NC State) were within four tenths of a standard deviation of each other. Perhaps not surprisingly, those five teams finished a combined 20-20 in the ACC.

So Who Was Better Than Their Record Showed?
Florida State won four conference games by 20 points or more. That was the most of any team in the ACC. 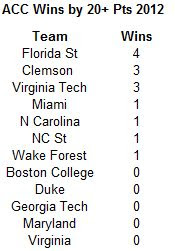 However, the Seminoles were not quite as fortunate in close games, losing one-score decisions to Clemson, Wake Forest, and Virginia leaving them with a somewhat deceiving 5-3 conference mark. A few lucky breaks here or there, and perhaps Florida State is playing in the Orange Bowl and not embarrassing the conference.

So Who Was Worse Than Their Record Showed?
Wake Forest used some Jim Grobe magic (patent pending) and nearly stole the division away from Clemson. Four of the Deacons five league wins came by eight points or fewer. Unfortunately, in the games that were not close, the Deacons ended up on the losing end. In two of their three conference losses, the Deacons were beaten by a combined 46 points by Virginia Tech and North Carolina.

Best Offense: Clemson 1.64
Here's what a high school offense can do. The Tigers topped 500 yards in three of their eight conference games after doing so just once from 2007-2010.

Worst Offense: Boston College -2.26
While Clemson rose (meteorically I might add) from the offensive abyss they occupied in 2010, Boston College dug deeper. The Eagles were held below 300 yards in five of their eight conference games and topped out with a 404 yard effort against Maryland.

Best Defense: Florida State 1.43
After opening conference play with consecutive defeats to Clemson and Wake Forest, during which they allowed a combined 834 yards (hardly a terrible amount), the Seminoles put the ACC on lockdown. Their last six league opponents averaged just 282 yards per game.

Worst Defense: Maryland -1.80
The Temple debacle was a chilling vision of things to come. The Terps, prohibitive favorites against the Owls, allowed 285 yards on the ground and were bludgeoned in their own stadium. In their ACC games. the Terps twice allowed opponents to rush for over 300 yards against them (Clemson and Boston College) and held just two conference opponents under 400 yards (Miami and Georgia Tech). Perhaps not coincidentally, the Terps beat Miami and suffered their closest ACC loss to Georgia Tech. 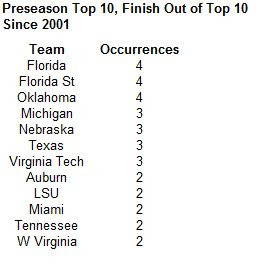 The Gators of course, can revel in their two national titles and the Sooners can take solace in their three national championship game appearances since 2001, Florida State has come nowhere near those heights. Florida State may not begin the 2012 season in the top-10, but if they are, this likely represents their best chance to live up to the hype.
Posted by matt at 5:34 AM