In the second installment of our SDPI sojourns, we take a look at the Big East, a conference that will be changing somewhat in 2012 (swapping out West Virginia for Temple) and then undergoing dramatic changes in 2013. For now though, we will focus on the present, or more accurately the recent past. To check out last year's SDPI post on the Big East, click here.

Here are the 2011 Big East standings.

Now here are the 2011 Big East SDPI standings. The standings are sorted by total SDPI with ranking for each category (out of 8 teams) in parentheses. 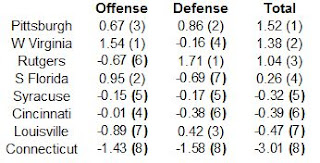 In their final season as Big East members, West Virginia won a three-way tiebreaker with Cincinnati and Louisville to nab the conference's automatic bid to the Orange Bowl. In that game, the Mountaineers trounced ACC champion Clemson, moving the ball seemingly at will in accumulating 70 points. The game marked their first foray into a BCS game since Rich Rodriguez left for Michigan following the 2007 regular season. The Mountaineers have dominated the Big East since the league's current incarnation in surfaced in 2005, and their departure leaves this the most wide open BCS conference race in 2012.

So Who Was Better Than Their Record Showed?
South Florida finished tied with Syracuse in the basement of the Big East, winning just once in seven conference games. However, outside of a non-competitive game against Pitt (lost 44-17), the Bulls played well enough to win in their other five league losses. The Bulls lost three games by a field goal each against Cincinnati, Rutgers, and West Virginia. For good measure, they also lost by six to Connecticut. South Florida also posted the league's worst in-conference turnover margin at -6. None of these facts will change the way the 2011 season played out, but it does mean South Florida is likely due for marked improvement in 2012.

So Who Was Worse Than Their Record Showed?
Both teams that finished tied with West Virginia at the top of the league were very fortunate to do so. Cincinnati and Louisville both posted middling peripherals, ranking sixth and seventh respectively in overall SDPI. In fact, Louisville's defense was the only facet of either team that was better than the Big East average. Both teams did go a combined 5-2 in one-score games, aiding them in their pursuit of a championship.

Best Offense: West Virginia 1.54
Offensive coordinator turned head coach Dana Holgorsen did what he was paid to do. The Mountaineers topped 400 yards in five of their seven Big East games. For good measure, they moved the ball quite well against one of the nation's best defenses in the non-conference, amassing 533 yards against LSU.

Best Defense: Rutgers 1.71
One season after being the worst in the Big East, the Scarlet Knights improved dramatically. They held four of their seven Big East foes under 300 yards and only West Virginia was able to consistently move the ball against them (gaining 428 yards).

Welcome Back Temple
Following the 2004 season, the Big East kicked the Temple Owls out of the conference. After spending 14 seasons in the conference and never winning more than four games in any one of them, you could understand the league's logic. Temple spent two seasons as a IA nomad without a conference, winning just a single game (it was against Bowling Green) in those two seasons. However, the Owls made a good hire while they were an independent, tabbing Al Golden to be their coach. Golden took the reins in 2006 and went 1-11. The Owls joined the MAC in 2007, and their fortunes shifted. They won four games, then five in 2008, and then nine in 2009 (while also qualifying for their first bowl game in nearly 30 years). They were bowl eligible again with eight wins in 2010, but like Alanis Morissette, were uninvited to the postseason. Golden left for Miami after the 2010 season, but the Owls continued their run of success under his successor Steve Addazio, winning nine games, including just their second ever bowl game. And wouldn't you know it, their old girlfriend noticed. Having just been dumped by West Virgina and needing an eighth date to the box social, the Big East invited Temple back into the fold. The Owls have truly come full circle. From BCS conference laughing stock, to worst team in IA, to MAC power, back to a BCS conference, this time as a reasonable contender. How reasonable are the Owls as a contender? The table below lists Temple's SRS ratings (per college football reference) since 2007. The SRS is a quick and dirty way of rating teams based on who they played and how much they won or lost by. It basically measures a team as the number of points above or below average they are. In any given season, the very best teams in college football are usually +20. The table also lists their SRS national rank and where they would have ranked in the Big East. 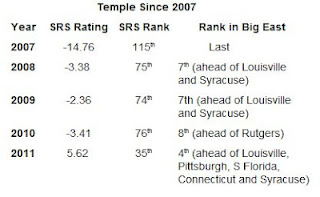 As you can see, while the Owls may have been a MAC power, they were below average when compared to the rest of IA from 2007-2010. Their 2011 season was solid, but still they would have ranked just fourth in the Big East. Temple is certainly a program on the rise, especially considering where they were just five seasons ago, but they may experience some growing pains in moving to a BCS conference, even one that lacks a true powerhouse team like the Big East.
Posted by matt at 9:03 AM