In our SDPI jaunt through college football, we now head to the midwest. Home of dairy, corn, and some pretty good football in 2011. To check out last year's post on the Big 10, click here. 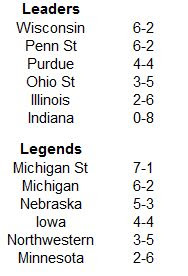 Now here are the 2011 Big 10 SDPI standings. The standings are sorted by division by total SDPI with ranking for each category (out of 12 teams) in parentheses. 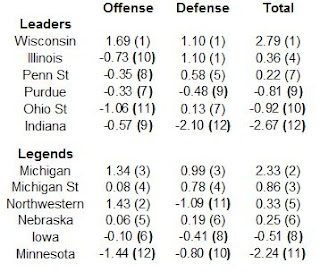 The Big 10 began divisional play in 2011 and thanks to a late roughing the punter penalty, the best team in the conference (Wisconsin) survived and advanced to the Rose Bowl. The second best team by SDPI (Michigan) received an at-large BCS bid to the Sugar Bowl. All told, the Big 10 boasted ten bowl teams, with only Indiana and Minnesota missing out on the postseason. The new format did produce some interesting results. Indiana became the first Big 10 team to go winless in conference play since Minnesota in 2007 (also under a first year coach), while Wisconsin became the first Big 10 champion to lose more than one conference game since the Purdue/Michigan/Northwestern logjam in 2000!

So Who Was Better Than Their Record Showed?
Outside of Wisconsin, SDPI viewed Illinois as the class of the Leaders Division, ranking them fourth overall. Alas, the Illini committed a league-high 21 turnovers in their eight conference games en route to a league worst turnover margin of -10. Their offense not only turned the ball over frequently, they also had trouble scoring points. In their final six conference games (all losses), the Illini were held to seven points three times, and never managed to top 17 points in any game. On a related note, the Illini changed coaches this offseason.

So Who Was Worse Than Their Record Showed?
Penn State stayed in contention for the Leaders Division crown until the last weekend of the regular season despite an offense that appeared to be using the playbook of Walter Camp. The Nittany Lions were the anti-Illini. Neither team could score, and both played solid to good defense. However, the Nittany Lions did a better job of holding onto the football (15 turnovers in Big 10 play) and forcing turnovers (17 in Big 10 play). They also fared well in one-score games, going 4-1 in such conference contests. As you may have heard, the Nittany Lions will have a new coach in 2012, and he doesn't step into a great situation.

Best Offense: Wisconsin 1.69
Russell Wilson fit like a glove, giving the always vaunted running attack a complimentary piece throwing the ball. Don't let the conference records fool you, the 2011 team (6-2) was better than the 2010 team (7-1) on both sides of the ball.

Worst Offense: Minnesota -1.44
The Gophers were held below 300 yards of offense in half their conference games. However, the running game did show signs of life late in the season, as the Gophers channeled a little Glen Mason in averaging 259 yards on the ground against Northwestern and Illinois in their final two games.

Best Defense: Illinois and Wisconsin 1.10
The Illini and Badgers allowed the exact same number of yards to Big 10 foes. The Badgers pulled double duty, possessing both the league's top offense and defense. However, while their offense was one of the best the Big 10 has seen in years, their defense was the worst to rank number in the conference in the seven years (2005-2011) I have been tracking SDPI. That relatively pedestrian defense was torn asunder in the Rose Bowl by Oregon, allowing 621 yards and 45 points to the Ducks.

Worst Defense: Indiana -2.10
The Hoosiers allowed every conference foe to top at least 400 yards against them and allowed at least 30 points in seven of eight conference games.

A Bad Time to be Good
Michigan State has gone a collective 14-2 against the Big 10 the past two seasons, yet has as many BCS bowl appearances in those two seasons as Indiana who is 1-15 that span. Like Salieri in the film Amadeus, the Spartans have been very good, but their rise has not been timely. In 2010, they finished in a three-way tie for first with Wisconsin and Ohio State, but were denied a BCS berth. In 2011, the Spartans won the Legends Division, but lost a close game in the inaugural Big 10 Championship Game to Wisconsin and were denied an at-large BCS berth. To make matters worse, the Spartans are actually 3-1 against Big 10 BCS bowl teams over the past two seasons, beating Wisconsin in 2010, Michigan in 2011, and splitting with Wisconsin in 2011. I wanted to see how hard luck the Spartans had been, so I looked at the six BCS conferences since 1998 (the first year of the BCS) to see if any teams had similar gaudy records and no BCS bowl games to show for it. The Spartans are in rare company.

Kansas State had by far the most glossy two-year record to never be invited to a BCS bowl. The Wildcats finished the 1998 regular season unbeaten in the Big 12 and overall, but lost the Big 12 Championship Game in overtime and were relegated to the Alamo Bowl. In 1999, they lost only to eventual Big 12 champion Nebraska, and settled for the Holiday Bowl. Only one other team finished with a conference record equal to Michigan State's over a two-year period. Texas went 7-1 in the Big 12 in 2000, but their one loss was to the undefeated and eventual national champion Oklahoma Sooners. An additional regular season loss to Stanford consigned them to the Holiday Bowl. Texas finished the 2001 season 7-1 in the Big 12 and were heavy favorites over Colorado in the Big 12 Championship Game. They were upset and again settled for the Holiday Bowl. Only two other teams have been as unfortunate as the Spartans when it comes to winning a lot of games over a two-year period and being shut out of a BCS bowl. It should also be noted that those two teams played in an era prior to 2006 when there were only four BCS bowls instead of five and thus two fewer slots.
Posted by matt at 11:49 AM