We're already halfway through the BCS conferences on our SDPI-guided journey through the 2011 college football season. We'll turn the corner after this week's edition where we examine the Big 12. To see last year's post on the Big 12, click here. 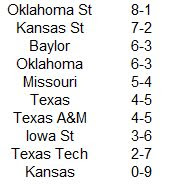 Now here are the 2011 Big 12 SDPI standings. The standings are sorted by total SDPI with ranking for each category (out of 10 teams) in parentheses. 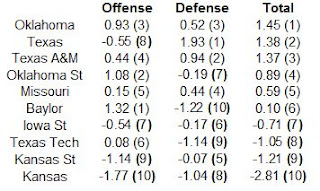 The 2011 season marked the first season of Big 12 play sans divisions as Colorado and Nebraska departed for the Pac-12 and Big 10 respectively. 2011 also marked the first time since 2003 that a team other than Oklahoma or Texas won the Big 12 title. The conference title was Oklahoma State's first since 1976, and their first outright conference title since 1948 when they were in the Missouri Valley! Elsewhere in the standings, Kansas became the first Big 12 team to go winless in the conference since Iowa State in 2008.

So Who Was Better Than Their Record Showed?
Despite very solid peripherals (top-four on both sides of the ball), Texas A&M endured a losing season in the conference and got their coach fired. The Aggies were 1-4 in one-score games in the conference, with their lone non-competitive loss coming at Oklahoma. Perhaps most disheartening for the Aggies was that they had double-digit leads in each of those close conference losses. They led Oklahoma State by 17 points at halftime, Missouri by 14 in the second quarter, Kansas State by 14 in the second quarter, and Texas by 13 in the second quarter. The Aggies should see their luck change a little in 2012, but unfortunately for them, they will be plying their trade in the take-no-prisoners SEC West. Good luck with that.

So Who Was Worse Than Their Record Showed?
Kansas State had their best conference finish since winning the Big 12 in 2003. However, six of their seven wins came by seven points or fewer. In fact, despite winning nine of their seven conference games, the Wildcats outscored their league opponents by just nine total points. Not only did they have exceptional luck in close games, the Wildcats also finished with a +13 turnover margin in league play (second best). The Wildcats are a unanimous choice by statistical indicators to regress in 2012.

Best Offense: Baylor 1.32
Led by a Heisman-winning quarterback who looked a little like Terence Trent D'Arby, the Bears ran roughshod over Big 12 defenses. They gained over 600 yards in five of their nine league games and were never held below 429 yards. With Robert Griffin and Kendall Wright both heading to the NFL, the Bears better find a wishing well if they want to recreate their success in 2012.

Worst Offense: Kansas -1.77
How do you say something nice about something this terrible? Here goes: In their final four conference games, the Jayhawks allowed over 500 yards just once after allowing that many four times in their first five games.

Best Defense: Texas 1.93
The Texas defense is a shade overrated thanks to their performance against Kansas when they allowed just 46 yards to the Jayhawks! Take away that awesome showing and credit the Jayhawks with an average performance and Texas still boasts the best defense in the conference, albeit one that is not otherworldly.

Worst Defense: Baylor -1.22
The Bears needed each and every yard and point their magnificent offense gained thanks to a defense that was in hibernation.

Upgrade?
As most college football observers know, the Big 12 will have lost two (more) league members when the football season begins in the fall. Missouri and Texas A&M are on their way to the SEC. In their place, the league has added a mid-major power in TCU and the dominant Big East program of the last half-decade in West Virgina. How do these two newcomers compare to the two programs that headed east? To find out, I looked at the SRS ratings of the four schools for the past five seasons (2007-2011). The SRS rating is a quick and dirty rating system utilized by college football reference dot com. It estimates how many points a team is better than average. The table below lists the four teams and their respective SRS ratings from 2007-2011 with their SRS national rankings in parentheses and a weighted average national ranking (with most recent seasons counting more heavily).

As you can see, based on weighted national ranking, the Big 12 appears to be getting a minor upgrade. However, based on the way Texas A&M is trending and the relative stagnation of the West Virginia program, I would call the new additions a wash.
Posted by matt at 12:23 PM