This week in our SDPI journey, we attempt to shed our east-coast bias and examine the Pac-12. To see last year's post on what was then known as the Pac-10, click here. 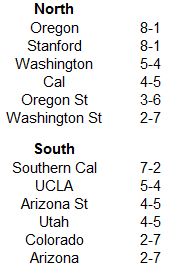 Now here are the 2011 Pac-12 SDPI standings. The standings are sorted by division by total SDPI with ranking for each category (out of 12 teams) in parentheses. 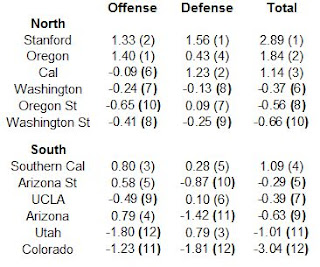 In 2011, the Pac-12 was a top heavy league, both in national reputation and actual performance. Three teams (Oregon, Stanford, and Southern Cal) finished the season ranked in the top-10, but no other team was ranked in the top-25. Similarly, four teams (Stanford, Oregon, Southern Cal, and Cal) finished with SDPI ratings over 1.00. However, none of the other eight teams finished with a positive SDPI rating. The two newcomers to the conference suffered the indignity of finishing eleventh and twelfth in the conference in SDPI.

So Who Was Better Than Their Record Showed?
The California Golden Bears finished with a losing conference record despite boasting one of the strongest defenses in the conference. Why did the Bears have a relatively grisly record, at least compared to their statistical profile? One reason is schedule strength. The Bears were unfortunate to reside in the same division as the top-two teams in the conference, Stanford and Oregon. The Bears also had to face the third best team (Southern Cal) in one of their games against the Pac-12 South. Another reason related to schedule strength is their road schedule. The Pac-12 plays a nine-game conference schedule (it has played one since 2006) and thus every other year each team must face five road games while playing just four at home. The Bears had five league road games in 2011 and went just 1-4 in those games, while going 3-1 at home. The third and final reason has to do with one-score games. The Bears played in just two one-score games in 2011, losing both. Those three facts coupled with the small sample of size of a nine-game season conspired to make Cal, a team that could very well have gone 6-3 or 7-2 in the Pac-12, to go a somewhat disappointing 4-5.

So Who Was Worse Than Their Record Showed?
The UCLA Bruins didn't do anything particularly well in 2011, yet thanks to some close game luck and some prior indiscretions at Southern Cal, they won the Pac-12 South. Over the course of their nine conference games, UCLA was outscored by 69 points. However, in one-score games they managed a perfect 3-0 record and earned the honor...of becoming a 6-8 bowl team?

Best Offense: Oregon 1.40
This is becoming old hat for Chip Kelly. The Ducks have posted the best offense in the conference each season he has been either offensive coordinator or head coach (2007-present).

Worst Offense: Utah -1.80
It was not a banner season for the Utes in their first trek through a BCS conference. The Utes were held below 400 yards in each of their nine conference games, topping out at 358 yards against Washington State.

Best Defense: Stanford 1.56
The Cardinal were very consistent on the year, holding seven of nine league opponents (including Oregon) under 400 yards.

Worst Defense: Colorado -1.81
The Buffaloes put things together in their final game, holding Utah (the league's worst offense) to 274 yards. That was about 244 yards less than they allowed to conference foes going into that game.

Where's The Middle?
Since 2008, only four Pac-10/12 teams have finished the season ranked in the AP top-25. Among the six BCS conferences, that is second to last, ahead of only the Big East (which has had two and four fewer teams than the Pac-10/12 in that span). 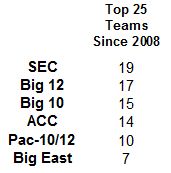 The mighty SEC reigns supreme in this category, boasting 19 top-25 teams in that span, with the Big 12, Big 10, and ACC lagging behind, but still far ahead of the Pac-10/12 and the Big East. However, when we look at teams that have finished the season ranked in the AP top-10, the Pac-10/12 has fared much better. 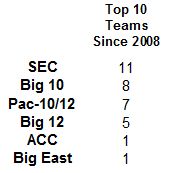 Their seven top-10 teams rank third behind the SEC with an incomparable 11 and the Big 10 with eight. Framed another way, 70% of the Pac-10/12 teams that have finished the season ranked in the AP top-25 since 2008 have finished in the top-10. That is by far the highest percentage of any of the six BCS conferences. 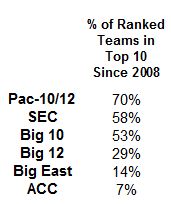 2011 was a perfect microcosm for how the Pac-10/12 has played out the past four season. The conference finished with three teams ranked in the top-10 (Oregon, Southern Cal, and Stanford), but no other teams ranked in the top-25. Since 2008, the Pac-10/12 has been dominated by those three teams, but has had a dearth of mid-level teams. In my opinion, this has harmed the league's credibility on a national scale, as many casual observers discount the accomplishments of the Big 3 because they see no other Pac-10/12 schools ranked in the top-25. Dear reader, don't fall prey to this east coast elitist bias. Oregon, Southern Cal, and Stanford have each produced several elite seasons in the past four years and deserve, nay demand your genuflection.
Posted by matt at 7:04 AM