Last time out, I published a piece examining how extremely lucky or unlucky teams perform the season after they experienced extreme fortune (either good or bad). Now I want to turn to another method that can be used to identify potential sleeper teams and teams that are likely to disappoint their collective fan base.

One of the preseason magazines I cannot do without is published by Phil Steele. In the fall, with the television on while on slaving away at this blog, I heard a commercial for a movie starring Hugh Jackman and thought they were making a documentary based on the college football guru. Imagine my disappointment when I discovered it was a derivative boxing movie featuring Rocky + robots. Oh well, I digress. One of the items Mr. Steele harps on in his preseason magazine is how big a role turnovers play in team performance. His magazine always features a section titled 'Turnovers = Turnaround'. Steele's contention is that teams with extreme turnover ratios (either good or bad) will see their margin trend back toward average the following season. Consequently, teams with great turnover margins tend to see their records decline and teams with poor turnover margins tend to see their records improve. I wanted to test his theory in a similar fashion to the way I tested close game performance. Thus, I looked at every college football team (excluding independents) from 2007-2010 and calculated their turnover margin in conference play. I looked only at conference games because teams often play extremely divergent non-conference schedules. Conference schedule strength on the other hand, remains relatively constant. I also decided to differentiate between BCS and non-BCS conferences based on the assumption that the non-BCS conferences would have greater shifts in year-to-year conference record thanks to a much less intrinsic ruling class. I then chose the most 'extreme' teams, those with a turnover margin greater than or equal to +10 or less than or equal to -10, and examined how they performed (in conference) in the season during which they had a great or poor turnover margin. Next I looked at how they performed the following season and calculated the difference. Here are the results. First the BCS conference teams with great turnover margins. 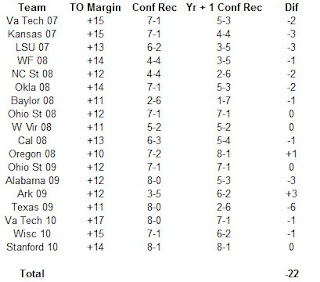 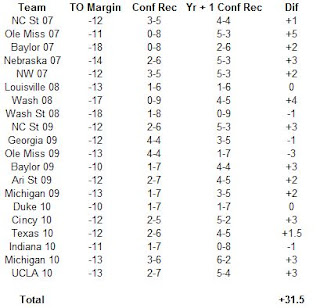 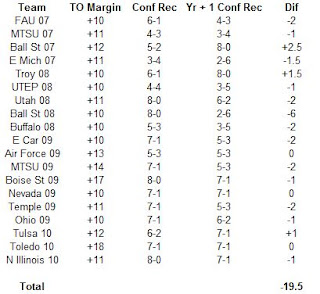 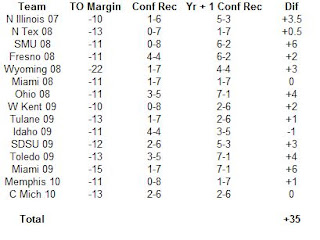 So what teams should we keep an eye on in 2012? Who could be slated for improvement and who may fail to meet preseason expectations? BCS teams with great in-conference turnover margins last season include Oklahoma State (+17), Wisconsin (+13), Kansas State (+13), LSU (+12), and Arizona State (+10). Oklahoma State, Wisconsin, Kansas State, and LSU went a combined 29-5 against their conference foes, so some regression is certainly in order here. Meanwhile, Arizona State went just 4-5 in the Pac-12, so while they do not have as far to fall, they probably will not be contending for the division title either.

Only two BCS conference teams from last season meet the criteria for poor in-conference turnover margin. Ole Miss (-11) and Illinois (-10) went a combined 2-14 in their respective leagues. Perhaps not coincidentally, they also have new coaches for 2012. At the very least, those new coaches should see at least modest improvement (and they can take all the credit).

Three non-BCS conference teams had poor in-conference turnover margins in 2011. SMU (-13), East Carolina (-11), and Florida Atlantic (-10) were all bitten by the turnover bug. Amazingly, East Carolina and SMU both finished with at least .500 marks in league play, a sign that they may be contenders in Conference USA in 2012. Meanwhile, the Owls from Florida Atlantic bottomed out at 0-8 in the Sun Belt, so there is no place to go but up for new coach Carl Pelini.
Posted by matt at 5:35 AM