After giving all six BCS conferences the SDPI treatment, we not turn our attention to the little guys. We'll begin with Conference USA, a league that nearly sent a team to a BCS bowl for the first time ever. To see last year's SDPI post on Conference USA, click here. 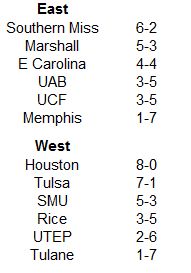 Now here are the 2011 CUSA SDPI standings. The standings are sorted by division by total SDPI with ranking for each category (out of 12 teams) in parentheses. 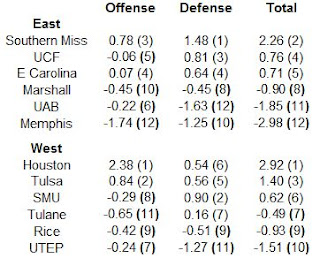 Houston boasted the first undefeated regular season in Conference USA since Tulane in 1998. Unfortunately for the Cougars, things went horribly awry in the Conference USA Championship Game (on their home field no less!). While the conference missed out on having their first ever BCS bowl game participant, the league did finish with two teams ranked in the top 25 (Southern Miss and Houston) for the second straight year after going five seasons without a single league member finishing the season ranked in the top 25. Perhaps the most ringing endorsement of the league in 2011 was that the head coaches of both championship game participants got jobs in BCS conferences (Texas A&M and North Carolina).

So Who Was Better Than Their Record Showed?
The Knights from Central Florida followed up the best season in school history with a subpar 5-7 record. However, six of their seven losses game came by a touchdown or less, including a two-point loss at eventual champ Southern Miss. The Knights have been one of the premiere programs in the league since joining in 2005, so I don't think George O'Leary should start updating his resume just yet.

So Who Was Worse Than Their Record Showed?
The preeminent MAC program of the late-90's and early 2000's struggled upon entering Conference USA. 2011 marked the first season Marshall finished with a winning conference record since joining the league in 2005. Unfortunately, the (immediate) results may not be sustainable. Marshall was a perfect 5-0 in one-score games. While that in and of itself does not damn the Thundering Herd, it should also be noted that despite posting a winning record on the year, Marshall was actually outgained by 88 points over 13 games. A market correction of sorts is likely in store for 2012.

Best Offense: Houston 2.38
The Cougars gained at least 500 yards in each conference game, topped 600 yards five times, and 700 yards twice. Then in the biggest game of the season, they gained only 428 yards as they were upset by Southern Miss.

Worst Offense: Memphis -1.74
This marks two seasons in a row the Tigers have featured the worst offense in the conference. The Tigers were held below 200 yards in three of their eight conference games.

Balance of Power
Since Conference USA adopted a divisional format in 2005, its fair to say a balance of power has been established. Central Florida, East Carolina, or Southern Miss have won the East division each season. Meanwhile, in the West, Houston, SMU, or Tulsa has claimed each division title. Between those six teams, they have posted a winning record in the conference 29 times since 2005. The other six teams, Marshall, Memphis, and UAB in the East, and Rice, Tulane, and UTEP in the West, have posted six combined winning conference records between them in that same span. In fact, those six teams have had just one winning conference record in the past three seasons (Marshall's 5-3 mark in 2011). The top three teams in each division also rarely lose to those in the bottom three. The table below lists the combined records of the East Power Three (Central Florida, East Carolina, and Southern Miss) versus the East Bottom Three (Marshall, Memphis, and UAB) and the West Power Three (Houston, SMU, and Tulsa) versus the West Bottom Three (Rice, Tulane, and UTEP).

The East and West Power Three have both posted sterling marks against the East and West Bottom Three. Both sets of power triumvirates have won more than 70% of their games against the bottom teams. SMU has fared the worst among both sets of power trios by going just 11-10 against the dregs of the West. However, it should be noted that the Mustangs went winless in conference play for two consecutive seasons (2007 and 2008). In the other five seasons, they have gone a robust 11-4 versus Rice, Tulane, and UTEP. Regression by Marshall and improvement by Central Florida and East Carolina should maintain that balance of power in the East. Meanwhile, in the West, SMU and Tulsa should be the dominant teams, resigning Rice, Tulane, and UTEP to second-division status once again.
Posted by matt at 10:43 AM