Our SDPI look back is almost complete. Just two more conferences to go. This week, we'll tackle the MAC, a conference that has been stuck on 13 teams for five seasons with the addition of Temple in 2007. Just when it looked like they would have an even number for 2012 with the addition of Massachusetts, Temple bolts to the Big East. To see last year's MAC SDPI post, click here. 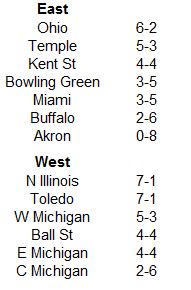 Now here are the 2011 MAC SDPI standings. The standings are sorted by division, by total SDPI with ranking for each category (out of 13 teams) in parentheses. 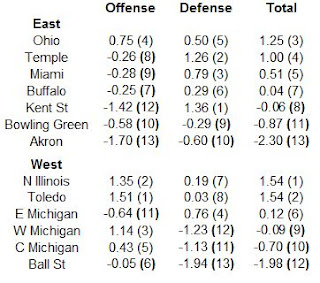 Ohio won the MAC East for the third time in seven seasons under Frank Solich, but failed yet again in their attempt to win the conference for the first time since 1968. Instead, Northern Illinois was your league champion, following up an 8-0 regular season with a 7-1 campaign and a second consecutive appearance in the MAC Championship Game.

So Who Was Better Than Their Record Showed?
Miami of Ohio followed up their MAC championship with a middling 3-5 conference record. After riding a close game hot streak (5-0 in one-score league games) to (relative) glory in 2010, their luck regressed and the Redhawks managed just a 1-3 mark in one-score MAC games in 2011. Couple that with the fact that they were forced to play three of the conferences top-four teams (Toledo, Ohio, and Temple) on the road, and the Redhawks record is just a tad misleading. For good measure, they also faced three BCS conference foes (Cincinnati, Minnesota, and Missouri) outside the MAC, further depressing their overall mark.

So Who Was Worse Than Their Record Showed?
After enjoying success at the IAA level at Lehigh and Elon, Pete Lembo guided Ball State to their first non-losing season (and a win over Indiana) since 2008 in his maiden voyage with the Cardinals. Unfortunately, much of that success may not be immediately sustainable in the near-term. The Cardinals won each of their four conference games by four points or less (combined margin of 12 points). In one of their league losses, they fell by 42. Over their eight MAC games, Ball State was outscored by 60 points. Teams with a similar scoring margin only win about a quarter of their games instead of half. Don't be surprised if the Cardinals are not able to Lembo quite as well in 2012.

Best Offense: Toledo 1.51
After being held to 305 yards in their MAC opener against Temple, the Rockets blasted off, never gaining fewer than 456 yards over the rest of the conference season. Their best performance came when they obliterated Western Michigan to the tune of 804 yards and 66 points in an exciting mid-week game.

Worst Offense: Akron -1.70
Zips is their nickname and the number of touchdowns their offense scored in three league games (zero touchdowns versus Temple, Miami, and Kent State).

Best Defense: Kent State 1.36
The Golden Flashes held six of their eight MAC opponents below 400 yards. Unfortunately, their offense was nearly as weak as their defense was strong. This was especially true when the Golden Flashes lost a game during which they allowed 166 total yards!

The LeFevour and the Cure
Central Michigan had a pretty good run under quarterback Dan LeFevour. With the dual-threat quarterback (or Rust Belt Tim Tebow if you prefer), the Chippewas went 27-4 against the rest of the MAC from 2006-2009, won three MAC titles, two bowl games, and culminated his senior campaign with a 12-2 season and AP top-25 finish. However, since LeFevour matriculated, the wins have been much harder to come by. The Chippewas have gone just 4-12 against the rest of the MAC and have put head coach Dan Enos squarely on the hot seat. Certainly, the offense has declined without the stud under center, falling from first in offensive SDPI in 2009 to fifth in both 2010 and 2011. However, the offense, while weakened has still been above average both seasons. The real culprit has been the disappearance of the defense. When the Chippewas were rolling through the MAC unbeaten in 2009, the defense ranked second in SDPI. The past two seasons, which have seen a pair of 2-6 league finishes, the Chippewas have finished 10th and 11th (out of 13 teams) in defensive SDPI. Digging a little deeper, the decline has been the primary result of a pass defense that has gone from very good to atrocious. The following table lists the passing numbers put up by MAC teams when facing the Central Michigan defense the past three seasons.

In 2009, the Chippewas allowed only seven passing touchdowns all season and just over six yards per pass attempt. In the next two seasons, they allowed 30 touchdown passes (against just eight interceptions) while allowing over seven and then over eight yards per pass attempt. If Central Michigan has designs on returning to the top of the MAC, they needn't find the next Dan LeFevour, but they must find a way to corral opposing receivers.
Posted by matt at 7:20 AM