Continuing on our mid-major tour, this week we examine the youngest Division IA conference, the Sun Belt. To see last year's SDPI recap of the Sun Belt, click here.

Here are the 2011 Sun Belt standings. 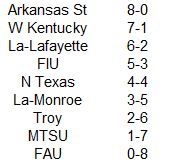 Now here are the 2011 Sun Belt SDPI standings. The standings are sorted by total SDPI with ranking for each category (out of 9 teams) in parentheses. 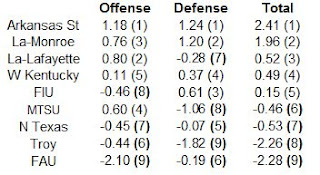 2011 marked the first time since 2005 that Troy did not win at least a share of the Sun Belt championship. The Trojans lost six conference games in 2012, exceeding the number they lost from 2006-2010 (five losses). In their stead, Arkansas State won their second Sun Belt title and first outright conference title since winning the Southland and finishing undefeated in 1975. Rising up and joining the Red Wolves near the top of the league standings were the Hilltoppers from Western Kentucky. The IA neophytes finished 7-1 in Sun Belt play after winning just two conference games in their first two years in the league.

So Who Was Better Than Their Record Showed?
Louisiana-Monroe has finished with an above-average SDPI rating in each of the past three seasons. However, their conference record over those three seasons is just 12-12. Statistically, 2011 was the Warhawks best season. However, they were 0-3 in one-score games within the conference. Couple that with a non-league schedule that included trips to Florida State, TCU, and Iowa and you have the makings of a 4-8 disappointment.

So Who Was Worse Than Their Record Showed?
Western Kentucky was a solid Sun Belt team in 2011, but their statistical makeup was not that of a team with a robust 7-1 league record. The Hilltoppers were a little lucky in one-score games, posting a 3-1 mark in conference play. No Sun Belt team drastically exceeded their statistical peripherals in 2011.

Best Offense: Arkansas State 1.18
Hugh Freeze became Arkansas State's offensive coordinator in 2010 and he raised their offense from dead last in the Sun Belt to third. As the head coach in 2011, the offense continued to improve and ranked first in the league.

Worst Offense: -2.10
The Owls sent Howard Schnellenberger out with a winless conference season. The Owls were held below 300 yards five times in their eight league games.

Worst Defense: Troy -1.82
The offense was below average in 2011, but the defensive ineptitude was the primary reason Troy plummeted in the conference standings. Four Sun Belt teams gained over 500 yards against the Trojans, and two others came very close (Arkansas State and Western Kentucky gained 489 and 494 yards respectively).

Rainey Day Players
Western Kentucky enjoyed by far their most successful season in 2011 since joining the Sun Belt as a full-time member in 2009. While the Hilltoppers rise in the standings was a total team effort, I wanted to recognize the play of their underrated star running back Bobby Rainey. Rainey did not play much as a redshirt freshman in 2008 when the Hilltoppers were provisional Sun Belt members. However, he earned the starting job early in his sophomore season and maintained a vice grip on it until his eligibility expired. The table below lists Rainey's rushing performance against Sun Belt teams for the past three seasons.

Rainey rushed for over 3100 yards since 2009 in conference play only! The Hilltoppers have played 24 league games since 2009, so his per game average is a very robust 131 yards per game. He topped the 100-yard plateau 16 times in 24 games, including 13 times in the past two seasons! He had some especially huge games in 2011, gaining 200 yards on the ground three times in league play! While Rainey was not an especially valuable receiver out of the backfield, he improved his catches and yardage each season. Here are his Sun Belt only receiving numbers since 2009.

Rainey also threw a touchdown against Arkansas State this season, meaning he accounted for 31 touchdowns versus Sun Belt foes since 2009 (26 rushing, four receiving, and one passing). As a team, the Hilltoppers scored 77 total offensive touchdowns against Sun belt foes since 2009. Thus, Rainey has accounted for over 40% (40.26 to be exact) of his team's total offensive touchdowns since joining the Sun Belt! Rainey went undrafted in the recently completed 2012 NFL Draft and is currently on the Baltimore Ravens roster. While he faces relatively long odds at making a profound impact in professional football, his performance at Western Kentucky was one worthy of praise from the hill tops.
Posted by matt at 4:07 AM