We're still in the dog days of summer, but if you look closely on the horizon, you can see the autumn slowing edging its way here. In a little less than seven weeks, the 2013 college football season will begin. And of course, that means here at Statistically Speaking, its time to start the 2013 College Football Previews. We'll begin with the six BCS conferences and then handicap the races in the four mid-major leagues, before concluding with a look at the Independents. These projections come out of the SDPI ratings published here and a little number I came up with last year called the Adjusted Pythagorean Record. Enjoy!

ACC Newcomers
As you may have heard, two newcomers will join the ACC in 2013. Pitt and Syracuse, like Boston College, Miami, and Virginia Tech a decade before, bolted the Big East and landed in the friendly confines of the ACC. What can we expect from the two newbies in 2013? As you can tell from the previews, my numbers expect them to go a combined 5-11 in the conference. But my numbers are a more micro preview based on how these teams performed last season and pieces they are likely to return (or not return) this season. What if we take a more macro view? In order to try and answer that question, I performed a very unscientific analysis of the 14 teams that make up the 2013 iteration of the ACC. I looked at each team's SRS numbers from the past four seasons. The SRS, or Simple Rating System, attempts to define how many points a team is above or below average. Thus a team with an SRS score of +7.00 should be about a touchdown better than a truly average team on a neutral field. Is this the end all rating for teams? Of course not, but it gives us a ballpark rating of team strength. Using the four seasons of data for each team, I attempted to estimate their SRS score in 2013. To do this I assigned arbitrary percentage values to each SRS score. The further in the past, the lower I weighed the SRS score. The final formula I came up with is described below. This formula is not based on any hard data, but it seemed right to me, and produced plausible results. The 2009 SRS accouts for 15% of the total, 2010 20%, 2011 25%, and 2012 30%. Any astute reader of this blog will notice those percents only add up to 90. For the final 10% I took the average of the four SRS scores. Here is an example of the formula as applied to Boston College. In 2009, the Eagles had an SRS score of 5.47. Multiplied by .15 gives us .82. In 2010, they dropped to 2.15. Multiplied by .2 gives us .43. In 2011, they dipped again to -4.61. Multiplied by .25 gives us -1.15. They continued to drop in 2012 with a score of -6.74. Multiplied by .3 gives us -2.02. Their four year average SRS is -.93. Multiplied by .1 gives us -.09. Adding these five numbers together gives us an estimate of -2.02 for 2013. This number ranks tenth out of 14 teams. Here are how all 14 teams are etimated to rank in 2013. 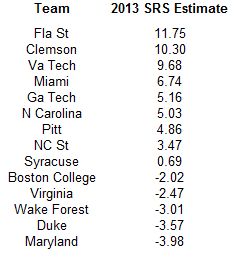 A few notes. Pitt clearly got the short end of the stick in terms of division allignment. While the Panthers rank seventh in estimated 2013 SRS, they rank just fifth in their division. Meanwhile, Syracuse ranks ninth in estimated SRS, but is a slightly healthier fourth in their division. As I stated earlier, most of these ratings seem plausible. I'll quibbled with Maryland ranking last (that honor should probably belong to Duke), but these numbers seem to pass the eye test.
Posted by matt at 6:34 AM