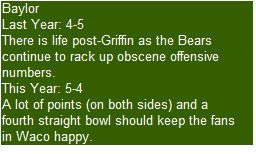 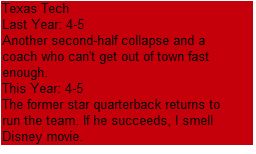 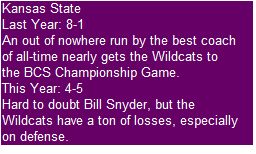 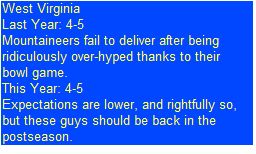 The offense got a little worse, but the defense played like a IAA school in the SEC, allowing an average of nearly seven yards per play over a 13-game sample size! Vegas obviously can't get a handle on the Red Raiders either. Texas Tech was 7-5-1 Against the Spread (ATS) versus the Big 12 from September through most of October, but just 2-11 ATS versus the Big 12 beginning with the last weekend in October under Tuberville. It will be interesting to see if Kliff Kingsbury can keep the Red Raiders from fading down the stretch for a fourth year in a row.
Posted by matt at 8:54 AM