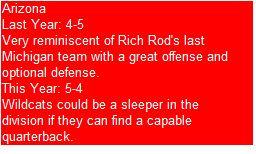 While the potent offense of Oregon has been more dominant, outscoring their league foes by over 24 points per game versus just under 21 for Stanford, both teams have doubled up their opponents on average the past three seasons. Perhaps more impressive for Oregon, is that among their 23 conference victims other than Stanford, 22 have come by at least double digits. The lone exception was their two-point escape at Cal in 2010. Stanford has played more close games, but 15 of their 23 victories have also come by double digits. Can the ridiculous dominance of the Ducks and Cardinal continue in 2013?
Posted by matt at 4:37 PM