Our final stop on the BCS conference preview and prediction tour takes us down south where the mighty SEC seeks to win an unprecedented eighth consecutive national title. 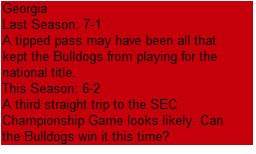 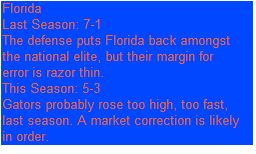 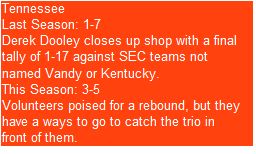 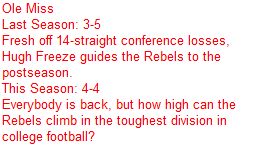 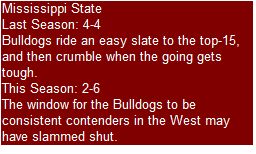 Alternative Ways of Scoring
Football is a unique game. It really is the only major sport where one play can have a disproportionate impact on scoring. Think about it this way. Team A has moved the ball 75 yards on 11 plays after receiving the opening kickoff and starting on their 20-yard line after a touchback. Team A's fans are thinking their squad is about to open an early lead with a 1st and Goal on Team B's five-yard line. Team A's quarterback drops back to pass and doesn't see the blitzing corner coming from his blindside. Before he can cock his arm to get rid of the ball he's hit. The ball comes loose and a linebacker picks in up and runs it back for a touchdown. After being 15 feet from a 7-0 lead, Team A is now behind 7-0 after just one play. In baseball, a homerun is a huge play, but a team can never hit a home run while they are playing the field. In basketball, a missed fastbreak opportunity can lead to a fastbreak chance for the opponent. However, with both teams combining for over 50 made baskets, a blown opportunity doesn't have the same impact in football where two teams combine for around six touchdowns. In hockey, a missed breakaway may anger some fans, but even if it leads to a scoring chance for the opposing team, there is always a gentleman between the pipes as a last line of defense. Even in football, one play never truly decides a game, but it can dramatically alter the plot. With that in mind, I wanted to look at non-offensive touchdowns in the SEC. That would of course mean touchdowns scored via interception, fumble, punt, or kickoff returns (we're counting blocked punts as punt returns here). I examined all non-offensive touchdowns scored by the twelve core SEC teams in conference play since 2007. I didn't include Missouri or Texas A&M since they are conference neophytes. My initial guess was that LSU would be head and shoulders above their conference brethren in non-offensive touchdowns. Visions of Trindon Holliday, Patrick Peterson, the Honey Badger, and Odell Beckham Jr. weaving through hapless would-be tacklers on punt returns had me banking on the Bayou Bengals scoring more alternative hits than the Red Hot Chili Peppers. Alas, I was not correct. Think about it for a moment and make your own guess. The reveal is below. 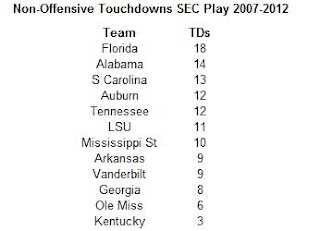 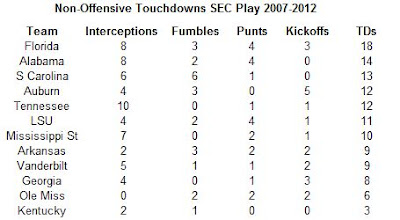 Some interesting tidbits that show just how random and unpredictable these events are: Tennessee leads the way with ten interception returns, but has scored just two additional non-offensive touchdowns. South Carolina has by far the most fumble return touchdowns, scoring in that manner twice as often as any other team. My LSU punt return memory served me correctly here as the Tigers finished in a three-way tie with Alabama and Florida for most punt return touchdowns. Three teams, Alabama (which leads with four punt returns), South Carolina (which leads with six fumble returns) and Kentucky have failed to run a kickoff back.
Posted by matt at 4:53 PM

I think the more comprehensive analysis of non-offensive contribution to scoring/winning would be to include the number of drives that started "inside FG range" (however we might define that say 33 yards and in???). Because if an offense is given posession of the ball at the opponet 10 yard line, the defense or special teams probably did something right to get them there. Also, it seems to me tht NET of punt/kick returns that would be a better measure of special teams efficiency as it relates to winning.

I agree that looking at where drives start is a great indication of defense and special teams prowess. However, I am kind of lazy and touchdowns are much easier to track.