The season is practically here. This is the last Saturday of 2013 that we will be without football! Rejoice, and enjoy the final season preview. 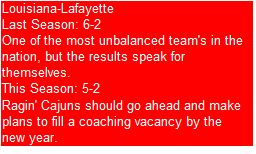 Transitioning
Did you know that six of the eight current Sun Belt head coaches have previous college head coaching experience at a level other than IA (or FBS)? Perhaps that is not terribly surprising as more half of the current league membership (Georgia State, South Alabama, Texas State, Troy, and Western Kentucky) have transitioned from IAA (or FCS) within the last decade or so (and three within the last two seasons). Still, outside of the four current Sun Belt head coaches who have been with their teams through the transition periods, Louisiana-Lafayette and Louisiana-Monroe are also coached by men with prior collegiate head coaching experience outside of the IA level. How do the other nine conference stack up in this regard? Do other leagues have a large number of coaches with prior experience at lower college levels? The table below ranks the ten IA conference by the percentage of teams coached by gentlemen with such prior experience. 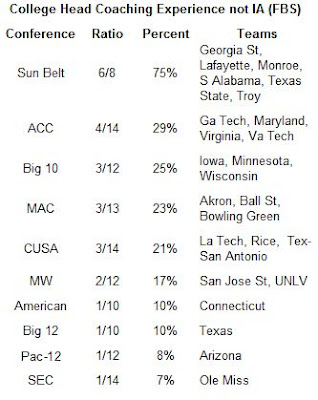 As you can see, with their recently transitioned teams, the Sun Belt has far and away the largest percentage of such coaches. Ranking second, perhaps surprisingly, is the ACC with four of 14 such coaches. At the other end of the spectrum, the SEC has only one such coach out of 14. Since the SEC is likely the toughest conference in which to acquire a head coaching job, it should come as no surprise that five of the current 14 head coaches have previous experience coaching teams from BCS conferences. Here is how all ten conference stack up in regards to coaches with previous experience at the BCS level (and Notre Dame). 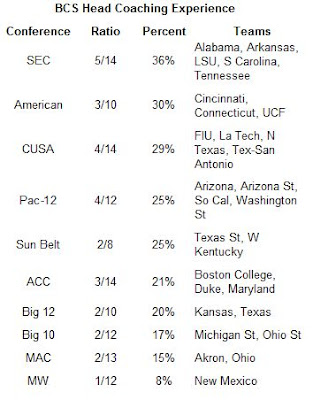