We are on the home stretch. The countdown has reached single digits and we are on our penultimate preview. In this post, we'll examine the MAC and see if they can send a team to a BCS bowl game for the second consecutive season. 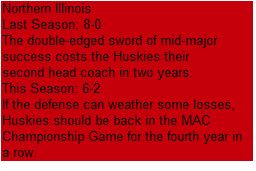 The MAC East: The Land of Opportunity
The MAC has been a very topsy-turvy conference over the past few seasons. One year a team is busy winning just a single game. The next year they win the whole conference. Similarly, a team can be riding a 40-year bowl drought, and then come within an overtime period of qualifying for a BCS bowl. Or I should say, one half of the conference has been topsy-turvy. In the MAC East, no team has repeated as division champions since Miami of Ohio in 2003 and 2004. However, out West, Central Michigan won three MAC West (and MAC Championship Games) in four seasons from 2006-2009. Furthermore, Northern Illinois has won the past three MAC West titles and is a heavy favorite to make it four in a row in 2013. The MAC East has truly been the land of opportunity, but the MAC West has been a territory of hegemony. The table below lists the MAC division champions since 2006, as well as their respective division finish the previous season.

Amazingly, MAC East champions have finished an average of fourth the prior season, with each champion save one ranking third or lower. On the other hand, no team in the West has risen from further than third to snare the division title. Expect more of the same in 2013. As mentioned earlier, Northern Illinois is a heavy favorite to repeat in the West, and if they do not, I feel comfortable that either of the second place finishers from 2012 (Ball State or Toledo) will represent the West in the MAC Championship Game. In the East, Kent State enjoyed a once in a generation season in 2012 and is unlikely to repeat their resplendent campaign. Bowling Green finished a strong second in 2012, but outside of an Akron or Massachusetts title, either of the the trio of Buffalo, Miami, or Ohio could rise from obscurity to a division championship.
Posted by matt at 5:21 PM