We've completed our BCS conference previews, so now we turn our attention to the mid-majors. We'll start out west with the preeminent mid-major league, the Mountain West, which will stage its first championship game this season. 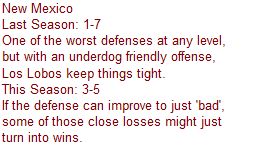 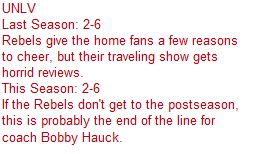 Postseason Struggles
Unlike college hoops, college football teams don't really develop a reputation as postseason chokers. College basketball has a real postseason where every team has a shot to cut down the nets. Ask any Notre Dame, Pitt, or Wake Forest basketball fan about the stuggles of their teams in the NCAA tournament, but bring a handerchief. On the other hand, college football's postseason is really just a plethora of exhibitions and one playoff game. That being said, the current twelve teams that make up the Mountain West have not exactly set the college football world aflame in their recent postseason trips. Since 2005, current Mountain West teams are just 18-27 in bowl games. They are a shade more respectable 20-25 Against the Spread (ATS). Boise State and San Jose State are the only team's with a winning bowl record, both straight up and ATS. The Broncos are 5-3 and the Spartans are 2-0 under both measures. If we take away those two teams, the other ten are just 11-24 straight up and 13-22 ATS.The following table summarizes the bowl records of current Mountain West teams since 2005, both straight up and ATS. 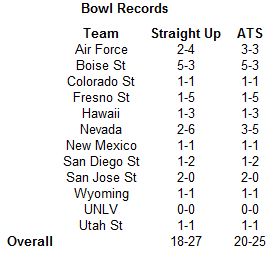 Perhaps more damning than the overall bowl record is the record of the bowl 'regulars'. Four teams besides Boise State have participated in at least four bowl games since 2005 (eight seasons). Those four teams, Air Force, Fresno State, Hawaii, and Nevada are just 6-18 straight up and 8-16 ATS. Keep this in mind when making your bowl picks in four months.
Posted by matt at 3:45 PM