Last week, we looked at how SEC teams fared in terms of yards per play. This week, we turn our attention to how the season played out in terms of the Adjusted Pythagorean Record, or APR. For an in-depth look at APR, click here. If you didn’t feel like clicking, here is the Reader’s Digest version. APR looks at how well a team scores and prevents touchdowns. Non-offensive touchdowns, field goals, extra points, and safeties are excluded. The ratio of offensive touchdowns to touchdowns allowed is converted into a winning percentage. Pretty simple actually.

Once again, here are the 2015 SEC standings. 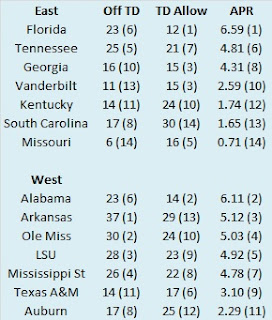 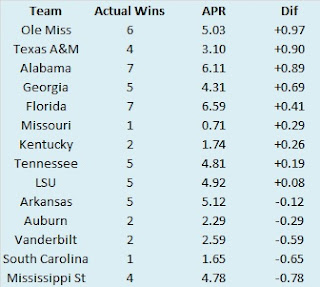 No SEC team significantly over or under-performed their expected APR. Since no team significantly over or under-performed, let's talk about a team that was able to efficiently turn their small per-play advantage into a much larger advantage in terms of scoring touchdowns. The Florida Gators were good, especially on defense in 2015. They featured the best defense in SEC play in terms of yards per play. If one adjusts for the quality of competition in their division, they may only rank as the second or third best defense (full disclosure, I didn't do the math), but they were strong on that side of the ball nonetheless. Offense was another story, as their unadjusted per play average ranked just 12th in the 14-team conference. However, when it came to scoring touchdowns, Florida went from being bad to being average. Their 23 offensive touchdowns in SEC play ranked sixth in the league. The efficiency gains by the offense were not offset by any losses in defensive efficiency. The Gators allowed just 12 touchdowns in SEC play which was tops in the conference. By paying off drives with touchdowns, Florida was able to post an APR more in line with their actual record as opposed to a middling record predicted by YPP (see last week's post). So since their APR was sterling, its clear sailing for the Gators in 2016 right? Maybe not. You may have noticed 2015 was a lot like 2012 for the Gators. From the 7-1 league record, to the disappointing bowl loss, to the narrow win over a Sun Belt school (I know Florida Atlantic is in Conference USA, but humor me), 2015 was eerily similar to 2012 in other ways as well. Here are Florida's vital stats in the conference metrics I track: YPP, APR, and turnover margin with conference rank in parentheses.

Over the course of eight conference games three years apart, with mostly different players and a different head coach, the 2012 and 2015 Florida Gators were effectively the same team. In fact, statistically (again unadjusted numbers), the 2012 incarnation was a little bit better. The offensive struggles of both teams were balanced by strong defenses, good to great turnover margins, and an ability to score more touchdowns than one might expect from those weak offenses (be it clutch play, great field position, or what have you). Looking forward though, it pays to heed history when projecting what happens next. The Florida defense remained strong in 2013, posting the best (unadjusted) YPP and allowing the fewest touchdowns. However, the offense remained stagnant (13th in YPP), the turnover margin regressed (to +1), the offense scored six fewer touchdowns in SEC play, and the Gators fell to 3-5 in and missed a bowl. I wouldn't call for a decline of that magnitude in 2016, but a finish of third or even (gasp!) fourth in the SEC East wouldn't shock me.
Posted by matt at 4:57 PM

UF had to play 3 different QBs in 2013, that had a lot to do with the offensive regression that year. Offensive side of the ball in much better shape on paper heading into 2016 plus competent coaching.

Agreed. Just wanted to point out that Florida was a little fortunate to go 7-1 in the SEC this past season.