We now turn our attention to the final conference alphabetically. Here are the Sun Belt standings. 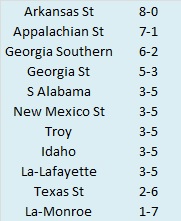 So we know what each team achieved, but how did they perform? To answer that, here are the Yards Per Play (YPP), Yards Per Play Allowed (YPA) and Net Yards Per Play (Net) numbers for each Sun Belt team. This includes conference play only. The teams are sorted by Net YPP with conference rank in parentheses. 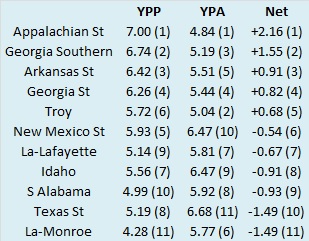 College football teams play either eight or nine conference games. Consequently, their record in such a small sample may not be indicative of their quality of play. A few fortuitous bounces here or there can be the difference between another ho-hum campaign or a special season. Randomness and other factors outside of our perception play a role in determining the standings. It would be fantastic if college football teams played 100 or even 1000 games. Then we could have a better idea about which teams were really the best. Alas, players would miss too much class time, their bodies would be battered beyond recognition, and I would never leave the couch. As it is, we have to make do with the handful of games teams do play. In those games, we can learn a lot from a team’s Yards per Play (YPP). Since 2005, I have collected YPP data for every conference. I use conference games only because teams play such divergent non-conference schedules and the teams within a conference tend to be of similar quality. By running a regression analysis between a team’s Net YPP (the difference between their Yards per Play and Yards per Play Allowed) and their conference winning percentage, we can see if Net YPP is a decent predictor of a team’s record. Spoiler alert. It is. For the statistically inclined, the correlation coefficient between a team’s Net YPP in conference play and their conference record is around .66. Since Net YPP is a solid predictor of a team’s conference record, we can use it to identify which teams had a significant disparity between their conference record as predicted by Net YPP and their actual conference record. I used a difference of .200 between predicted and actual winning percentage as the threshold for ‘significant’. Why .200? It is a little arbitrary, but .200 corresponds to a difference of 1.6 games over an eight game conference schedule and 1.8 games over a nine game one. Over or under-performing by more than a game and a half in a small sample seems significant to me. In the 2015 season, which teams in the Sun Belt met this threshold? Here are the Sun Belt teams sorted by performance over what would be expected from their Net YPP numbers. 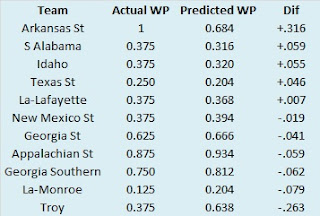 The 2015 Sun Belt season saw a pair of teams with records that diverged significantly from their expected records based on YPP. The league champion, Arkansas State, significantly over-performed their expected record, and former league heavyweight, Troy, significantly under-performed under first year coach Neal Brown. Arkansas State was a bit unusual as they went unbeaten in Sun Belt play and won each of their conference games by at least ten points. How were they able to win games so easily despite good, but not great YPP numbers? For starters, they boasted a turnover margin of +17 in their eight Sun Belt games. A few weeks ago, in the Mountain West YPP post, I examined similar teams that averaged turnover margins greater than +2 per game or less than -2 per game. Like San Diego State, Arkansas State is due for some regression in the turnover department and likely in their record as well. In addition to their healthy turnover margin, Arkansas State also managed to score in unconventional ways. They scored eight non-offensive touchdowns in Sun Belt play (five interception returns, two fumble returns, and one punt return), and their net non-offensive touchdown margin was the highest in the conference by far. 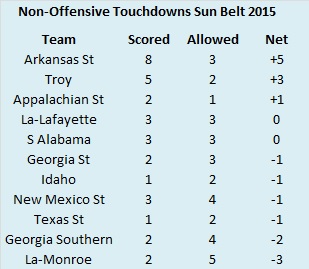 As you can see, Troy also had a solid non-offensive touchdown margin, but the Trojans finished 0-3 in one-score league games. Meanwhile, all their wins came in dominating fashion, with each coming by at least 24 points.

One of the bigger surprises (at least to me) from the 2015 Sun Belt season was the struggle of Louisiana-Lafayette. After four consecutive bowl appearances (and wins) under head coach Mark Hudspeth (perhaps the strongest FBS coach), the Ragin' Cajuns slipped to a 4-8 record and finished in the bottom half of the conference. Was this a random blip for Lafayette or a sign of things to come? To try and answer this question with something aside from wild speculation, I looked at other coaches who like Mark Hudspeth: began coaching since 1984 (the relative modern era), coached at an FBS mid-major (like Louisiana-Lafayette), had at least four consecutive winning seasons to begin their tenure, and then suffered a losing campaign. Perhaps not surprisingly, with so many stipulations, only six other coaches met the criteria. And one of them is probably familiar to Ragin' Cajun fans. The following table lists the six coaches, the school they coached at, their record in their first few years until their losing year, the year they suffered a losing record, the year they got back to their winning ways (if they ever did), and their career record after their first losing season. I know that's a lot to digest, but take a look at the table, and I'll summarize later.

To help you read the table, I'll go through Fisher DeBerry's row. DeBerry coached at Air Force and posted a 35-14 record in his first four years. In his fifth year, the Falcons slipped to 5-7. His charges rebounded immediately, posting a winning record in his sixth season. All told, after going 5-7 in his fifth season, DeBerry managed a 129-88-1 record over the next 18 seasons at Air Force.

Of the six coaches who met the criteria, I think we safely say just two could be deemed 'successful' after their first losing campaign, and both happened to coach for the Air Force Academy. Fisher DeBerry rebounded from his first losing season to spend 18 additional years at the school. His successor, Troy Calhoun, has also bounced back from his first losing season. The three seasons since his first losing year have resulted in a rather mediocre 20-19 overall record, but that includes a putrid 2-10 record in 2013. Over the past two seasons, the Falcons are 18-9, with a division championship. The other Lafayette coach, Nelson Stokley (father of Super Bowl hero Brandon Stokley), lasted eight years at Lafayette after his first losing season, but posted just three winning records over that span. The other three coaches, Gary Blackney, Tom Amstutz, and Gary Darnell (all MAC coaches coincidentally), failed to produce any winning seasons after their first losing campaign. Based on an admittedly small sample size, 2016 appears to be a very important year for Mark Hudspeth. DeBerry and Calhoun got back to their winning ways within two years after posting their first losing season. The lesson appears to be that despite past success, mid-major coaches have a very short time frame to pull out of their tailspin. Either the plane crashes or someone else hops in the pilot seat.
Posted by matt at 10:03 AM