We are closing in on the home stretch. Just two conferences to go. This week we examine the SEC. Here are the 2015 SEC standings.

So we know what each team achieved, but how did they perform? To answer that, here are the Yards Per Play (YPP), Yards Per Play Allowed (YPA) and Net Yards Per Play (Net) numbers for each SEC team. This includes conference play only, with the championship game not included. The teams are sorted by division by Net YPP with conference rank in parentheses. 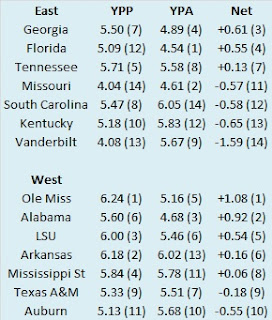 College football teams play either eight or nine conference games. Consequently, their record in such a small sample may not be indicative of their quality of play. A few fortuitous bounces here or there can be the difference between another ho-hum campaign or a special season. Randomness and other factors outside of our perception play a role in determining the standings. It would be fantastic if college football teams played 100 or even 1000 games. Then we could have a better idea about which teams were really the best. Alas, players would miss too much class time, their bodies would be battered beyond recognition, and I would never leave the couch. As it is, we have to make do with the handful of games teams do play. In those games, we can learn a lot from a team’s Yards per Play (YPP). Since 2005, I have collected YPP data for every conference. I use conference games only because teams play such divergent non-conference schedules and the teams within a conference tend to be of similar quality. By running a regression analysis between a team’s Net YPP (the difference between their Yards per Play and Yards per Play Allowed) and their conference winning percentage, we can see if Net YPP is a decent predictor of a team’s record. Spoiler alert. It is. For the statistically inclined, the correlation coefficient between a team’s Net YPP in conference play and their conference record is around .66. Since Net YPP is a solid predictor of a team’s conference record, we can use it to identify which teams had a significant disparity between their conference record as predicted by Net YPP and their actual conference record. I used a difference of .200 between predicted and actual winning percentage as the threshold for ‘significant’. Why .200? It is a little arbitrary, but .200 corresponds to a difference of 1.6 games over an eight game conference schedule and 1.8 games over a nine game one. Over or underperforming by more than a game and a half in a small sample seems significant to me. In the 2015 season, which teams in the SEC met this threshold? Here are the SEC teams sorted by performance over what would be expected from their Net YPP numbers. 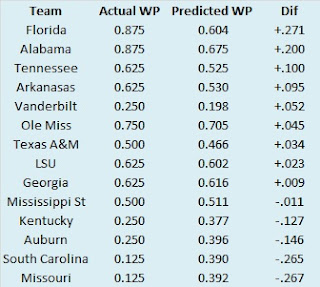 The SEC saw a pair of teams fall below and a pair of teams exceed their YPP expectations. For Missouri and South Carolina, the two teams that failed to reach their expected record based on YPP, the culprit was simple: close game results. Missouri and South Carolina finished a combined 0-6 in one-score conference games. While both teams were especially bad on one side of the ball (offense for Missouri and defense for South Carolina), it took several bad bounces for them to finish a combined 2-14 in SEC play. The two teams that vastly exceeded their YPP results also happened to meet in the SEC Championship Game. A confluence of factors allowed the Gators to win the SEC East in their first season under Jim McElwain. Florida finished 3-1 in one-score conference games, boasted the best in-conference turnover margin (+8), and scored three non-offensive touchdowns. For Alabama, the results are more mystifying. The Crimson Tide lost only once all season (by six points), and won just a single conference game by fewer than thirteen points. The Tide were not especially buoyed by turnover margin either, finishing a respectable, but hardly superb +1 in SEC play. However, the Tide did take advantage of unconventional touchdowns. They returned four interceptions for touchdowns in SEC play, including three against Texas A&M. The Tide continued to score in unconventional ways in the playoffs, returning a punt for a touchdown against Michigan State (not needed for the victory) and a kickoff for a touchdown against Clemson (vital to the win).

2015 closed the book on the Steve Spurrier era at South Carolina. As a Columbia resident and degree holder from the university (I try to keep this a secret), I decided to conduct a review of Mr. Spurrier’s overall body of work in the SEC. We’ll start with some basic housekeeping. While Spurrier retired/resigned/quit halfway through the season, we are going to credit the win over Vanderbilt and the three other conference losses under Shawn Elliott to his account. This was his team after all, even if he couldn’t stand to see them play defense either.

Let’s start by looking at his SEC record. The following table lists the conference record for each SEC team since the 2005 season. Newcomers Missouri and Texas A&M are listed at the bottom. 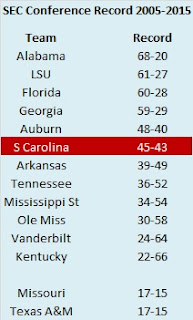 Among the twelve tribes of the SEC, South Carolina ranks almost exactly in the middle over the last eleven years. They also rank third in the East, significantly behind Florida and Georgia, but also significantly ahead of once (and perhaps future) power Tennessee. One interesting, non-Gamecock related observation: Kentucky should be very ashamed. Their league record is worse than Vanderbilt’s over the past eleven seasons! 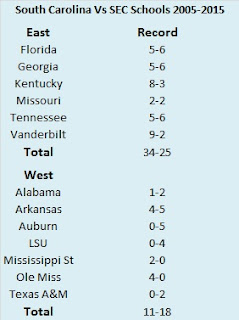 A few observations. Based on historical precedent, the Gamecocks performed well against the ‘Big 3’ in the East, compiling a 15-18 record with identical 5-6 marks against each team. That being said, it is easy to see where Spurrier padded has record. The Gamecocks went a combined 17-5 against Kentucky and Vanderbilt, collecting more than a third of his SEC victories (and exactly half of his wins versus the East) against that pair. Finally, outside of a perfect record against the Mississippi schools, the Gamecocks had a horrible track record against SEC West schools. Take away the wins against Ole Miss and Mississippi State, and the Gamecocks are just 5-18 against the West.

Finally, how did Spurrier performe as a favorite and as an underdog? The following table lists Spurrier’s record against conference foes in both roles. These results are straight up, and not against the spread. 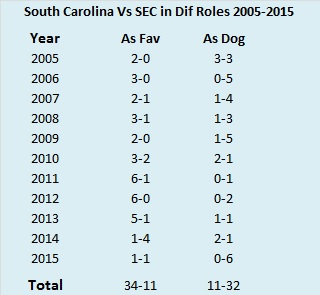 While this is not a perfect measure (I made no distinction between being a twenty point favorite and a two point favorite), it can give you an idea of how South Carolina was perceived by the tools bookmakers use to set the point spread and by the public once those spreads are made. For example, in his first season (2005), the Gamecocks were only favored in a pair of conference games. Contrast that with 2011 when the Gamecocks were favored in every league game save one. Overall, especially prior to the wheels sort of coming off at the end of his tenure, Spurrier has very good as a favorite (32-6 through 2013). By the same token, he was pretty bad as an underdog, especially in his final season. I’ll leave you with this bit of statistical minutia: If Spurrier had won every SEC game in which the Gamecocks were favored and lost each one in which they were an underdog, he would have ended up with the same record he actually achieved: 45-43. Eerie.
Posted by matt at 5:10 PM