Last week, we looked at how SEC teams fared in terms of yards per play. This week, we turn our attention to how the season played out in terms of the Adjusted Pythagorean Record, or APR. For an in-depth look at APR, click here. If you didn’t feel like clicking, here is the Reader’s Digest version. APR looks at how well a team scores and prevents touchdowns. Non-offensive touchdowns, field goals, extra points, and safeties are excluded. The ratio of offensive touchdowns to touchdowns allowed is converted into a winning percentage. Pretty simple actually. Once again, here are the 2016 SEC standings. 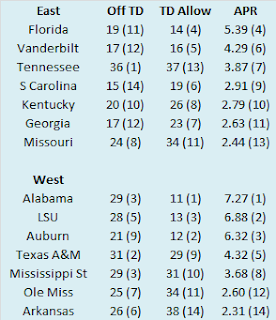 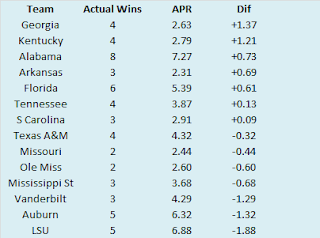 I use a game and a half as a line of demarcation to determine if teams drastically over or under perform their APR. By that standard LSU significantly under-performed relative to their APR. There is not a lot of mystery as to why that is the case. LSU won five conference games. Four of those wins came by an average of 24 points. The other was a narrow victory over Mississippi State. Their three losses came by a combined 21 points, with the 10-0 loss to Alabama their largest margin of defeat.

Two weeks ago in the APR write up of the Pac-12, I looked at how well Pac-12 coaches over or under-performed relative to their APR and expected YPP records. In that post, I only looked at the Pac-12 since it expanded to twelve teams (2011-2016). Taking inspiration from Senator Blutarsky who noted Jim McElwain exceeded his YPP significantly in his first two seasons at Florida, I decided to do the same with the SEC. However, since it just means more in the SEC, I decided to go back as far as I have APR and YPP data - 2005. To qualify for inclusion on the leaderboards, coaches had to have at least three full SEC seasons under their belts in the twelve year period from 2005 through 2016. This criteria produced 27 coaches ranging from greats like Saban and Meyer to forgotten men like Croom and Dooley. Finally, before we get to the actual tables, just a housekeeping note. For coaches who did not finish a season (see Les Miles in 2016), I used the full season difference and credited them with the percentage they coached. For example, LSU was 1.88 games worse than expected in APR in 2016. Miles coached two (of eight) conference games so he receives 'credit' for negative 0.47 wins (-1.88*.25). The rest go to Ed Orgeron who receives 'credit' for negative 1.41 wins (-1.88*.75). Without further adieu, here are SEC coaches ranked by the average number of wins per season they exceeded their APR. 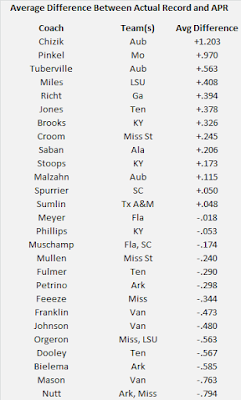 Chizik only coached for four seasons, so sample size is obviously an issue here. His national championship team was almost three wins better than their APR and his next team finished .500 in conference play despite an APR of only about two wins. His other two teams were pretty neutral in regards to their APR, but that sixteen game run puts him in front. Pinkel and Tuberville had similarly short tenures (remember this only includes Tuberville's stint on The Plains from 2005-2008), but fielded several teams that were better than their APR. For coaches with a significant tenure, Miles and Richt exceeded their expected records by about two fifths of a win on average. At the other end of the spectrum, you will find a plethora of Vanderbilt coaches consistently under-performing their peripherals. James Franklin, Bobby Johnson, and especially Derek Mason all occupy space in the bottom quartile. Houston Nutt coached at two schools during this time period and while his three Arkansas teams under-performed by about half a win per season, his four Ole Miss squads were even worse as they averaged more than a full win less than their APR!

Now let's look at Yards Per Play. Here are the SEC coaches ranked by the average amount they exceeded their expected record based on YPP. Keep in mind while APR was based on wins (i.e. +.500 equals half a win greater than expected), YPP is based on winning percentage. Thus, Tommy Tuberville's +.135 translates to a little more than one win (.135*8 = 1.08) per conference season. 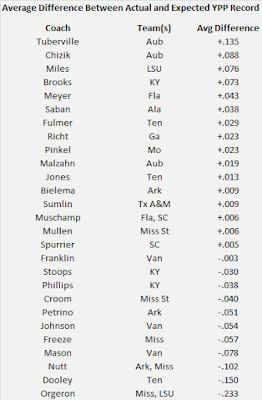 Once again, we see some familiar faces at the top. Chizik and Tuberville were first and third respectively in APR and are second and first in YPP. Miles is once again the longest tenured coach in the top five while Richt is closer to average here. The bottom of the list also looks very similar with Ed Orgeron bringing up the rear. If you look back at the APR numbers, he was also fifth from the bottom there. I was a big fan of Orgeron's hiring last season, but these tables give me pause. On the one hand, Orgeron's teams have under-performed in each of his nearly four full seasons in charge. In addition, while the 2016 team was not totally his, keep in mind LSU was a consistent over-achiever, at least relative to their peripheral stats under Miles. On the other hand, Orgeron went a decade between head coaching jobs and in between appears to have matured while also guiding another team to a solid finish after a mid-season firing. Perhaps we shouldn't judge 2016 too harshly with all the turmoil surrounding the program. However, if 2017 plays out like 2016 did, with LSU blowing out five conference opponents, while losing a semi-competitive game to Alabama and two other close games in the SEC, not only will we have further evidence of a trend, Orgeron will find himself squarely on the hot seat.
Posted by matt at 3:38 AM