Last week, we looked at how Sun Belt teams fared in terms of yards per play. This week, we turn our attention to how the season played out in terms of the Adjusted Pythagorean Record, or APR. For an in-depth look at APR, click here. If you didn’t feel like clicking, here is the Reader’s Digest version. APR looks at how well a team scores and prevents touchdowns. Non-offensive touchdowns, field goals, extra points, and safeties are excluded. The ratio of offensive touchdowns to touchdowns allowed is converted into a winning percentage. Pretty simple actually. Once again, here are the 2016 Sun Belt standings. 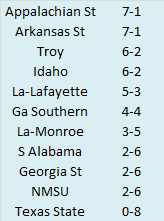 And here are the APR standings with conference rank in offensive touchdowns, touchdowns allowed, and APR in parentheses. This includes conference games only. 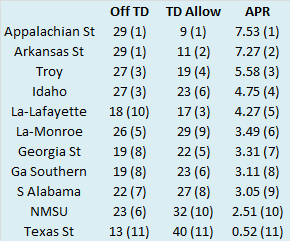 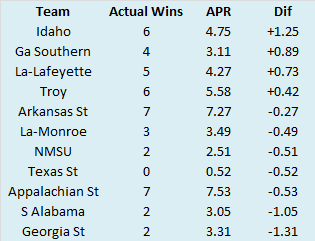 I use a game and a half as a line of demarcation to determine if teams drastically over or under perform their APR. By that standard no team saw their record differ significantly from their APR. Idaho and Georgia State were the biggest over and under-achievers respectively, but we already touched on some reasons for that last week.

Georgia Southern enjoyed a successful, perhaps the most successful, transition from FCS to FBS. In their first two seasons in the new classification, the Eagles went 18-7, won an outright conference title, won a bowl game, and played three Power 5 schools to within one score on the road. Despite their success, head coach Willie Fritz made what amounts to a lateral move (or perhaps even a downgrade) to Tulane. In his stead, the Eagles made an interesting hire. They tabbed Tyson Summers, a Georgia native, who spent just one season in Statesboro. That one season (2006) happened to be the worst in school history. Summers also came from the defensive side of the ball, as he had most recently been the defensive coordinator at UCF and Colorado State before coming to Georgia Southern. Summers did keep the run-first option the team utilized to great success under his predecessor, but the performance left a lot to be desired. After averaging over six yards per carry in both 2014 and 2015 and scoring 109 combined touchdowns on the ground, the Eagles averaged under four and half yards per carry and scored just 24 rushing touchdowns in 2016. This decline in production contributed to a 5-7 record in Summers' first season where the Eagles had to upset Troy in their final game just to get to five wins. Summers enters 2016 on the proverbial hot seat. So what are his chances of surviving and getting the Eagles back to a bowl? To answer that question, I looked at all first year coaches since 2006 who oversaw a decline of at least three regular season wins and an increase of an least three regular season losses. That query produced a sample of 38 coaches. How did those coaches perform the following season? The results are summarized below. 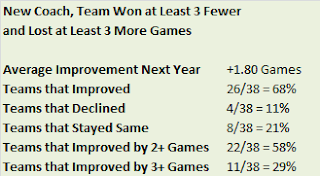 Overall, the teams improved by an average of about two regular season wins the next year. More than two thirds of the teams improved the next season, and only about ten percent saw a further erosion of their record. More than quarter of the teams in the sample improved by at least three games, so there is hope for a large positive shift in fortunes for concerned Georgia Southern fans. However, I don't want to give those fans a false hope. There is decent, perhaps good, chance that Summers is not the right man for the job. Of that sample of 38 coaches, 29 are no longer with their teams. Of those 29, only five had a winning record at the end of their tenure with the team. If we include the coaches who are still active, 9 of 38 have winning records with their team. There are some success stories to point to like PJ Fleck, Skip Holtz, and Butch Jones, but while the odds of Georgia Southern improving in 2017 are good, the odds of them retaining Summers for the long haul may not be.

Thanks for reading my 2016 YPP and APR posts. Its been almost 20 weeks since Clemson upset Alabama, but we still have about 14 more weeks before college football season kicks off in earnest. Over the summer, this blog will add new content, but it won't be as frequent as the weekly updates you have (hopefully) been enjoying. I have some studies in the queue on polls and their accuracy and biases so if that interests you, check back every now and then. I'll also be making another Vegas trip and documenting my college football investments. Once the season starts, I'll continue with my weekly picks column and perhaps add more original posts here and there as the spirit so moves me. Have a great summer. I know we can get through the rest of this long offseason together.
Posted by matt at 3:40 AM