Hard to believe, but we are now halfway through our conference recaps. Next up is the MAC. Here are the 2017 MAC standings. 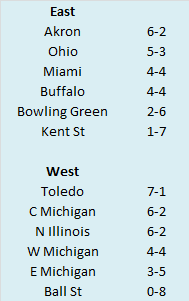 So we know what each team achieved, but how did they perform? To answer that, here are the Yards Per Play (YPP), Yards Per Play Allowed (YPA) and Net Yards Per Play (Net) numbers for each MAC team. This includes conference play only, championship game excluded. The teams are sorted by division by Net YPP with conference rank in parentheses. 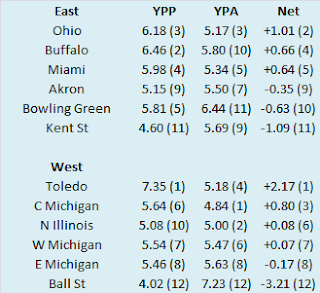 College football teams play either eight or nine conference games. Consequently, their record in such a small sample may not be indicative of their quality of play. A few fortuitous bounces here or there can be the difference between another ho-hum campaign or a special season. Randomness and other factors outside of our perception play a role in determining the standings. It would be fantastic if college football teams played 100 or even 1000 games. Then we could have a better idea about which teams were really the best. Alas, players would miss too much class time, their bodies would be battered beyond recognition, and I would never leave the couch. As it is, we have to make do with the handful of games teams do play. In those games, we can learn a lot from a team’s YPP. Since 2005, I have collected YPP data for every conference. I use conference games only because teams play such divergent non-conference schedules and the teams within a conference tend to be of similar quality. By running a regression analysis between a team’s Net YPP (the difference between their Yards Per Play and Yards Per Play Allowed) and their conference winning percentage, we can see if Net YPP is a decent predictor of a team’s record. Spoiler alert. It is. For the statistically inclined, the correlation coefficient between a team’s Net YPP in conference play and their conference record is around .66. Since Net YPP is a solid predictor of a team’s conference record, we can use it to identify which teams had a significant disparity between their conference record as predicted by Net YPP and their actual conference record. I used a difference of .200 between predicted and actual winning percentage as the threshold for ‘significant’. Why .200? It is a little arbitrary, but .200 corresponds to a difference of 1.6 games over an eight game conference schedule and 1.8 games over a nine game one. Over or under-performing by more than a game and a half in a small sample seems significant to me. In the 2017 season, which teams in the MAC met this threshold? Here are MAC teams sorted by performance over what would be expected from their Net YPP numbers. 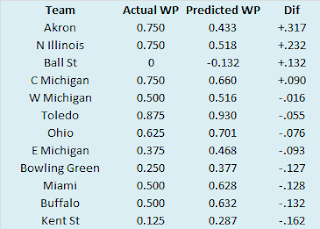 No MAC teams significantly under-performed relative to their YPP numbers, but Akron and Northern Illinois finished a little higher in the standings that we might otherwise expect. The Zips and Huskies combined to finish 6-1 in one-score conference games, with Akron finishing 3-0 in such contests, including a pair of one-point wins and a three-point win against Ohio that ultimately gave them the division title. Both teams also scored in unconventional ways, as they combined to score seven more non-offensive touchdowns in MAC play than they allowed. Northern Illinois finished +4 (scored five and allowed one) while the Zips finished +3 (three scored and none allowed). Finally, Akron led the MAC in in-conference turnover margin (+10) on their way to their first division title since 2005.

Speaking of division titles, you may have noticed Akron won the MAC East despite being ‘underwater’ in terms on their Net YPP. How often do teams with negative per play differentials win their divisions? I’m glad you asked. I have YPP data back to 2005, so I fired up the Excel spreadsheet and perused the data to find out. Since 2005, there have been seven such instances (including Akron in 2017) of mid-major teams finishing with negative in-conference YPP numbers and winning their division. They are listed chronologically in the table below.

There was a bit of a hiatus following the 2008 season, but since 2014, an average of one mid-major division champion per season has finished with a negative per play differential. As we might expect, those underwater division champs have seen their luck run out in the conference championship games. Buffalo and East Carolina in 2008 are the only teams to win their respective conference championships. This cohort has also performed quite poorly in their bowls games, winning just once in seven games. And finally, the teams tend to decline the next season, although there are some notable exceptions in East Carolina and Bowling Green. The Pirates repeated as Conference USA champions in 2009 while Bowling Green improved dramatically in their second season under Dino Babers en route to a MAC title in 2015. However, despite those examples of improvement, I would expect the Zips to perform closer to the average underwater division champ and experience at least a modest decline in 2018.

To satisfy my own curiosity, I decided to look at major conference (BCS and Power Five) division winners that finished underwater. Surprisingly, since 2005, there were actually more division champs from major conferences that finished with negative in-conference YPP differentials. I figured the more egalitarian nature of mid-major conferences would produce more underwater division winners, but at least in this thirteen year sample, that did not occur. And interestingly, none of the underwater division champs got that way via technicality. I figured UCLA in 2011 or Georgia Tech in 2012, winners due to postseason bans of their division mates, would be on this list, but they actually posted positive Net YPP numbers. 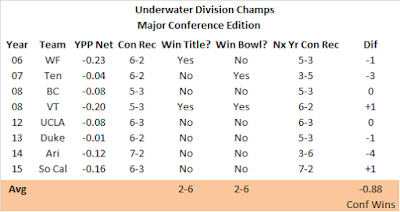