Last week we looked at how Pac-12 teams fared in terms of yards per play. This week, we turn our attention to how the season played out in terms of the Adjusted Pythagorean Record, or APR. For an in-depth look at APR, click here. If you didn’t feel like clicking, here is the Reader’s Digest version. APR looks at how well a team scores and prevents touchdowns. Non-offensive touchdowns, field goals, extra points, and safeties are excluded. The ratio of offensive touchdowns to touchdowns allowed is converted into a winning percentage. Pretty simple actually. 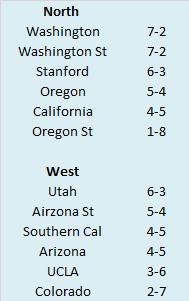 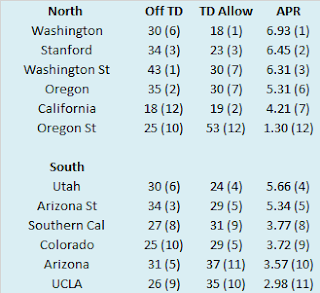 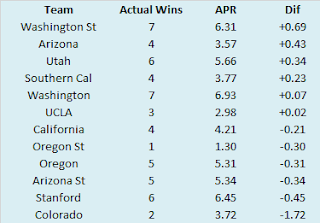 I use a game and a half as an arbitrary line of demarcation and by that standard, Colorado was the only team that saw their actual record differ significantly from their APR. They also under-performed relative to their YPP numbers and we went over some reasons for that last week, so there is no need to rehash that here.

Problems in the Pacific Northwest
Oregon State has endured a rough few years since Mike Riley departed. In the four seasons since Riley left to take the Nebraska job, the Beavers are just 9-39 overall and 4-32 in Pac-12 play. The Beavers did technically improve their won/loss record under first year head coach Jonathan Smith, but they were among the worst BCS/Power 5 teams since 2005 in terms of Net Yards Per Play. 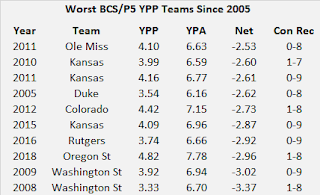 The Beavers were only ‘bested’ by Paul Wulff’s first two horrendous Washington State teams which managed to finish more than three yards per play under water in back-to-back seasons. Now, the all-important question is, how much improvement is possible in one season? To answer that question, we first need to define what we mean by improvement. Do we mean playing better, regardless of the change or lack thereof in won/loss record or are we only concerned with winning more games? I’ll try to answer both queries. First, here are the teams from the previous chart (minus Oregon State of course) with their Net YPP, their Net YPP the next season, and the difference between the two numbers. 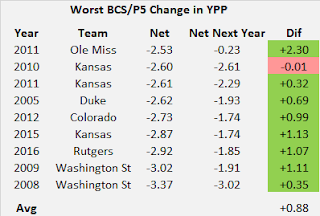 This is good news for Oregon State. The Beavers are likely to improve. Eight of the previous nine worst teams in Net YPP improved the following season, with Kansas being the only team to decline (and they pretty much stayed the same). On average, the teams improved by about nine-tenths of a yard per play with Ole Miss seeing the largest single season improvement (more on them later) at +2.30.

Now let’s see how each team’s conference record changed in the following season. 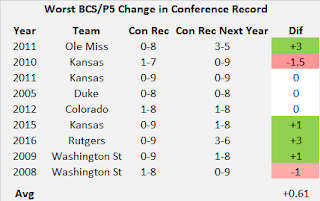 Unlike the YPP table, this is more of a mixed bag. Four of the nine teams improved, three stayed the same, and two declined. However, despite improved conference record for four of the nine teams, the starting point was so low to begin with that only two of the nine teams finished with more than one conference win. And those can be explained with some extenuating circumstances. Rutgers was still quite bad in 2017, winning three conference games by a total of 20 points. Their 'improvement' didn't last and they were once again winless in conference play in 2018. Meanwhile Ole Miss was (quite obvious in hindsight) cheating like hell. Unless Jonathan Smith is calling hookers on his state-issued cell phone, expectations for the Beavers in 2019 should be muted. If Oregon State can improve to around -2.00 in net yards per play and hold steady in the conference win column, 2019 should be considered a success in Corvallis.
Posted by matt at 3:23 AM