Last week we looked at how SEC teams fared in terms of yards per play. This week, we turn our attention to how the season played out in terms of the Adjusted Pythagorean Record, or APR. For an in-depth look at APR, click here. If you didn’t feel like clicking, here is the Reader’s Digest version. APR looks at how well a team scores and prevents touchdowns. Non-offensive touchdowns, field goals, extra points, and safeties are excluded. The ratio of offensive touchdowns to touchdowns allowed is converted into a winning percentage. Pretty simple actually.

Once again, here are the 2018 SEC standings. 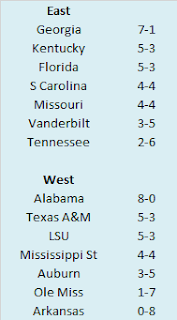 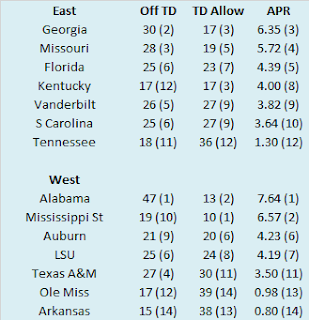 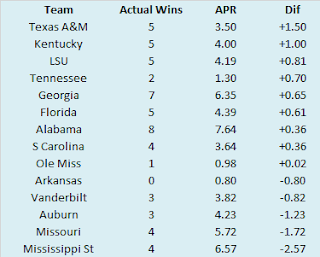 I use a game and a half as an arbitrary line of demarcation and by that standard, Texas A&M significantly over-performed relative to their APR. The Aggies also exceeded their expected record based on YPP and we went over some reasons for that last week, so I won’t rehash that here. On the other end of the spectrum, Missouri and Mississippi State significantly under-performed relative to their APR. Neither team was significantly unlucky (combined 1-3 in one-score conference games), but they both showed signs of dominance. Three of Missouri’s four conference wins game by at least three touchdowns while all of Mississippi State’s conference wins came by at least fourteen points.

Mississippi State and the Dominance of a .500 Record
Speaking of Mississippi State…
The Bulldogs undershot their APR by over two and a half games. Going back to 2005, that is one of the largest negative discrepancies between a team’s actual record and their APR (in the BCS/Power Five). 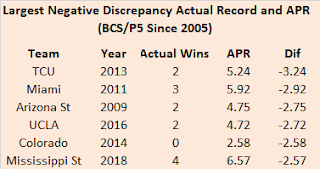 That in itself is a pretty amazing ‘accomplishment’, but when I looked closer at the numbers I was shocked at Mississippi State’s performance in their conference wins and their conference losses.

In their four conference losses, Mississippi State managed a solitary offensive touchdown. However, the defense was still solid. Extrapolated to a full conference season, their average of 2.25 touchdowns allowed per game (18 over an eight-game season) would have ranked fifth in the SEC in 2018. If the offense had shown up even a little, the Bulldogs could have split those four games and been eyeing a top-ten finish in their bowl game.

Obviously the level of competition is a factor in their divergent performance in the wins and losses. Their four conference losses all came to teams that finished the season ranked in the AP top fifteen while two of their four wins came against the dregs of the SEC West (Arkansas and Ole Miss). Still, the Bulldogs also notched convincing wins against Auburn and Texas A&M and held Alabama to their lowest regular season point total so the potential for a memorable season was there. Taken together, the first year of the Joe Moorhead era feels like a waste. With an opportunity to salvage a ranked finish in the Outback Bowl, the Bulldogs somehow lost to Iowa despite allowing just 199 yards of total offense. The Bulldogs were much better than your typical five-loss also-ran (12th in SRS, 8th in S&P+), but coaches are remembered for wins and losses, not the wet dreams of stat nerds. I don’t believe Moorhead is in trouble by any means, but he missed a great opportunity to extend the honeymoon period in Starkville.
Posted by matt at 3:21 AM