After examining the coastal elites (or lack thereof) in the ACC, we now turn our attention to the heartland of America and the Big 10.

Here are the Big 10 standings. 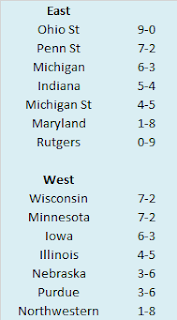 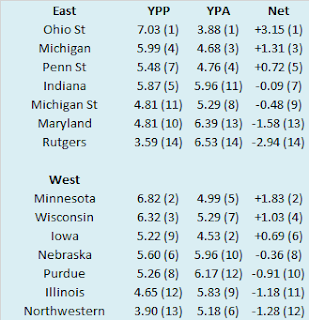 College football teams play either eight or nine conference games. Consequently, their record in such a small sample may not be indicative of their quality of play. A few fortuitous bounces here or there can be the difference between another ho-hum campaign or a special season. Randomness and other factors outside of our perception play a role in determining the standings. It would be fantastic if college football teams played 100 or even 1000 games. Then we could have a better idea about which teams were really the best. Alas, players would miss too much class time, their bodies would be battered beyond recognition, and I would never leave the couch. As it is, we have to make do with the handful of games teams do play. In those games, we can learn a lot from a team’s YPP. Since 2005, I have collected YPP data for every conference. I use conference games only because teams play such divergent non-conference schedules and the teams within a conference tend to be of similar quality. By running a regression analysis between a team’s Net YPP (the difference between their Yards Per Play and Yards Per Play Allowed) and their conference winning percentage, we can see if Net YPP is a decent predictor of a team’s record. Spoiler alert. It is. For the statistically inclined, the correlation coefficient between a team’s Net YPP in conference play and their conference record is around .66. Since Net YPP is a solid predictor of a team’s conference record, we can use it to identify which teams had a significant disparity between their conference record as predicted by Net YPP and their actual conference record. I used a difference of .200 between predicted and actual winning percentage as the threshold for ‘significant’. Why .200? It is a little arbitrary, but .200 corresponds to a difference of 1.6 games over an eight game conference schedule and 1.8 games over a nine game one. Over or under-performing by more than a game and a half in a small sample seems significant to me. In the 2019 season, which teams in the Big 10 met this threshold? Here are Big 10 teams sorted by performance over what would be expected from their Net YPP numbers. 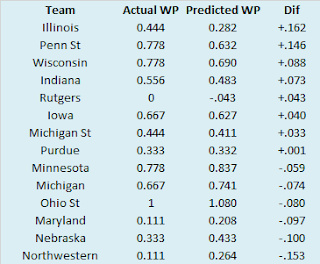 No Big 10 team significantly over or under-performed relative to their expected record based on YPP. Northwestern was on track for a winless Big 10 season despite bad, but far from horrific YPP margins, but the Wildcats dominated Illinois in their season finale to avoid both the goose egg and showing up on this list.

The Worst Ever Ranked Teams
Last offseason in the Big 10 YPP post, I examined some of the worst head coaches (by win percentage) to ever get a second head coaching job. The post was basically a hit piece on incoming Maryland coach Mike Locksley. To the surprise of no one, Locksley fell on his face in his first full year coaching the Terrapins. Maryland defeated an FCS team, a team that went winless in the Big 10, and a team that finished with the second worst conference record in the ACC. They lost their other nine games by an average of more than thirty points per game and ended the year on a seven game losing streak. However, in the process, Maryland did manage to do something truly historic.

Maryland did not begin the season in the top 25 of the AP Poll. Why would they? The team was coming off a 5-7 campaign and had not won more than seven games in a season in nearly a decade. However, thanks to an easy opening schedule, the Terrapins were able to build some momentum a fortnight into the season. Maryland recorded a dominating 79-0 victory against Howard in their season opener and followed that up with an impressive (at the time) six touchdown win against a ranked Syracuse team. Two weeks into the season, Maryland climbed into the polls at number 21. All they had to do to maintain their perch in the AP Poll was win on the road against an AAC team that was on its third head coach in nine months. The heretofore explosive Maryland offense managed just 17 points against Temple and fell out of the rankings, never to be seen again in 2019. After the loss, Maryland managed just one victory the rest of the way and in the process became the worst team (record wise) in the past thirty seasons (since 1989) to ever start the season unranked and later enter the polls. In my opinion, this is a more impressive feat than being the worst team to ever start the season ranked in the preseason AP Poll. Once you get outside of the top fifteen, the preseason AP Poll is a lot of guess work and conjecture buoyed by a brutally long offseason packed with narratives. By contrast, a team that is unranked in the preseason, but later enters the poll and still ends up being bad has provided the pollsters with at least one, and in Maryland’s case two, data points in their evaluation.

Who are the other members of this illustrious rogues' gallery of bad teams? Along with Maryland, six other teams since 1989 have started the season unranked in the AP Poll, later entered the poll, and won four games are fewer. They are presented below for your viewing pleasure. 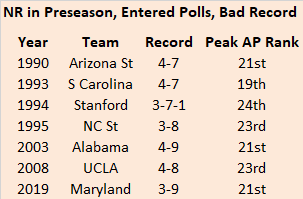 Some interesting minutia before I close: South Carolina achieved the highest ranking of these teams at 19th. The Gamecocks opened the 1993 season by winning at fourteenth ranked Georgia and spring boarding into the polls. They followed that victory with a one point loss at Arkansas and despite being 2-1, 3-3, and 4-4 at various points in the season, the closing stretch of Tennessee, Florida, and Clemson (all ranked at the time South Carolina played them) doomed the Gamecocks to a 4-7 finish. Despite not being ranked in the preseason AP Poll, Stanford was actually ranked by the time they played their first game in 1994. The Cardinal had a bye week over Labor Day Weekend and moved up to 24th by the time they headed to Northwestern for their opener. The Cardinal tied the Wildcats and fell out of the poll for the remainder of the season. UCLA did not even get to play a game as a ranked team in 2008. They opened the season by upsetting eighteenth ranked Tennessee in their first game under Rick Neuheisel. They moved into the rankings following the game, but had a bye before their second game. During the bye, they fell out of the polls and were walloped by BYU 59-0 in their next game. Needless to say, they did not sniff the polls for the rest of the season.

I know we have a lot of fun at Mike Locksley’s expense on this blog, but I give credit where credit is due. Locksley’s three wins in 2019 equaled his career total going in to the 2019 season and actually upped his career winning percentage to a sterling .130. Check back next week when we give the Big 10 the APR treatment.
Posted by matt at 3:11 AM