As the month of February draws to a close, we come to the fourth conference in our offseason sojourn, the Big 12.

Here are the Big 12 standings. 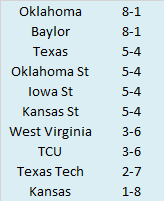 So we know what each team achieved, but how did they perform? To answer that, here are the Yards Per Play (YPP), Yards Per Play Allowed (YPA) and Net Yards Per Play (Net) numbers for each Big 12 team. This includes conference play only, with the championship game not included. The teams are sorted by Net YPP with conference rank in parentheses. 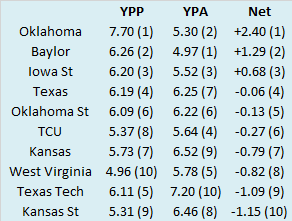 College football teams play either eight or nine conference games. Consequently, their record in such a small sample may not be indicative of their quality of play. A few fortuitous bounces here or there can be the difference between another ho-hum campaign or a special season. Randomness and other factors outside of our perception play a role in determining the standings. It would be fantastic if college football teams played 100 or even 1000 games. Then we could have a better idea about which teams were really the best. Alas, players would miss too much class time, their bodies would be battered beyond recognition, and I would never leave the couch. As it is, we have to make do with the handful of games teams do play. In those games, we can learn a lot from a team’s YPP. Since 2005, I have collected YPP data for every conference. I use conference games only because teams play such divergent non-conference schedules and the teams within a conference tend to be of similar quality. By running a regression analysis between a team’s Net YPP (the difference between their Yards Per Play and Yards Per Play Allowed) and their conference winning percentage, we can see if Net YPP is a decent predictor of a team’s record. Spoiler alert. It is. For the statistically inclined, the correlation coefficient between a team’s Net YPP in conference play and their conference record is around .66. Since Net YPP is a solid predictor of a team’s conference record, we can use it to identify which teams had a significant disparity between their conference record as predicted by Net YPP and their actual conference record. I used a difference of .200 between predicted and actual winning percentage as the threshold for ‘significant’. Why .200? It is a little arbitrary, but .200 corresponds to a difference of 1.6 games over an eight game conference schedule and 1.8 games over a nine game one. Over or under-performing by more than a game and a half in a small sample seems significant to me. In the 2019 season, which teams in the Big 12 met this threshold? Here are Big 12 teams sorted by performance over what would be expected from their Net YPP numbers. 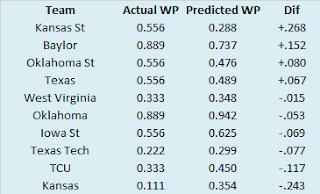 Both teams from The Sunflower State saw their actual record differ significantly from their expected record. For Kansas State, and their first year head coach Chris Klieman, the difference was positive. The Wildcats were a solid 3-2 in one-score conference games and also boasted a non-offensive touchdown net ratio of +3. The Wildcats returned three kickoffs for touchdowns in Big 12 play while allowing none. Those kickoff returns kept them close in a loss to West Virginia, provided the winning margin in a victory over Texas Tech, and extended the margin in a tight game with Iowa State. Meanwhile, Kansas, also led by a first year (for them) head coach, went 1-2 in one-score games and finished tied for last in in-conference turnover margin at -8.

Purple Magic Continues in Manhattan
I have made no secret of my affinity for Bill Snyder on this blog. Regarded by me, often seen as the authority on all things college football (don’t bother looking it up), as the best college football coach in history, 2019 marked just the fourth season Snyder was not roaming the sidelines in the past thirty years. His replacement, Chris Klieman, did a fine Snyder impression, at least in regards in doing more with less, if not in general curmudgeonyness. Allow me to explain what I mean.

When Bill Snyder initially revitalized (or vitalized if you want to get technical) the Kansas State program in the mid-90s, one of the ways he managed to acquire talent was through the junior college ranks (JUCOs). A somewhat novel way to recruit talent to an outpost like Manhattan, Kansas was to take chances on players that could not get into FBS institutions out of high school or were forced to leave FBS institutions once they arrived. As an early adopter of the strategy, this netted Snyder a number of talented players that otherwise may have never considered Kansas State. As the new decade dawned and the Clinton era of prosperity gave way the Bush era of recession and war crimes, Kansas State’s early adopter advantage of using JUCOs began to diminish. After winning the Big 12 for the first time in 2003, the Wildcats finished with losing records in Bill Snyder’s final two seasons. He retired following the 2005 season and Ron Prince took over. He guided the Wildcats to the postseason in 2006, but posted consecutive losing seasons in 2007 and 2008 before being fired. Instead of bringing in a new coach, the Wildcats coaxed Snyder out of retirement. His second tenure lasted ten seasons and featured eight bowl appearances, another Big 12 title, and three appearances in the final AP Poll. He continued scouring the JUCO ranks for talent, but in his second tenure, Snyder’s teams also boasted an uncanny ability to consistently and significantly outperform their expected record based on YPP. Emphasizing special teams, red zone defense, and playing at a slow pace to limit the number of possessions, the Wildcats routinely hung with, and often beat superior teams. Using the same blueprint, Klieman managed to do the same thing in 2019.

In the eleven seasons (ten for Snyder and one for Klieman) since Snyder returned from his first retirement, Kansas State exceeded their expected record based on YPP by far more than any other Big 12 team. The following table lists the average amount each Big 12 team has over or under-performed relative to their expected YPP record since 2009. I have also included the number of seasons each team played in the Big 12 since the membership has changed significantly. 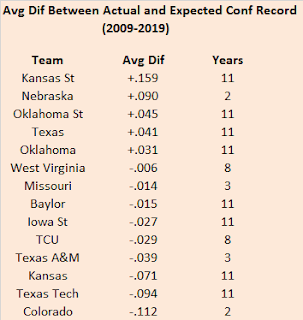 No other Big 12 team exceeded their expected record by more than an insignificant amount on average over the past eleven seasons. Being insignificantly above or below average is what one might expect as the sample size increases and the random close game or turnover luck evens out. However, over an eleven year span, Kansas State exceeded their expected YPP record on average by .159. To put this is in another context, this is the equivalent of about 1.25 game in an eight game conference season and 1.4 games over a nine game schedule. In addition, this is not the result of one massive season of Wildcat exceptionalism. Kansas State has finished as the biggest overachiever in the Big 12 five times in eleven seasons and has underachieved relative to YPP just once. 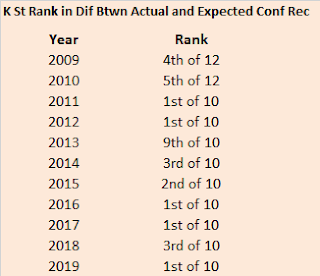 Obviously, one season is not a large enough sample to make any bold proclamations about Klieman's future at Kansas State. However, it was a great start, particularly in regards to how well the Wildcats performed relative to their YPP numbers. Were I a Kansas State fan, I would be cautiously optimistic the experienced FCS national champion coach could continue the wizardry in Manhattan.
Posted by matt at 3:34 AM