In Case You Missed It: Week 5

...Has the world gone mad? After the pollsters sifted through the carnage from the weekend's action on the gridiron, they saw fit to anoint the Kentucky Wildcats the #8 team in the country. That is a tad ridiculous. Sure Kentucky's 5-0 start is somewhat surprising, but let's examine how tough their schedule has actually been by looking at their second-order Division IA wins. Second-order wins are the victories by teams Kentucky has beaten. Those second-order wins are: Iowa State (1-4), Ohio (2-3), Middle Tennessee State (1-4) twice, NC State (1-4), Troy (3-2), North Texas (0-4) twice, and Minnesota (1-4). Kentucky's best second-order win is over Troy. To be fair, Troy is a solid team (they did knock off Oklahoma State), but when that is your marquee second-order win, you don't belong in the top 10. Kentucky is coasting on the reps of two of the teams they have beaten; Louisville and Arkansas. Last season, those two teams were two of the country's best, but this season that is not the case. Louisville has since dropped another game, this one at home against Syracuse, while Arkansas is 0-2 against the SEC, but 2-0 against the Sun Belt. Do you honestly believe that Kentucky is better than Florida, or Oklahoma, or Texas, or Oregon, or a litany of other squads? Jeff Sagarin's computer rankings have the Wildcats at 16. To me that is still a little too generous.

...Congratulations are in order for the South Florida Bulls. On Friday, they knocked off Big East favorite and top 10 team , West Virginia. That's a pretty impressive feat for a team that hadn't played a game when Nebraska and Florida dueled in the Orange Bowl in January of 1996. Still, the Bulls are not the best team in Florida (as some pundits have erroneously claimed), nor are they the best team in the Big East. That distinction belongs to the team that was vanquished Friday, the West Virginia Mountaineers. Before you run grab your pitchforks, consider this: The Bulls won 21-13 despite having homefield advantage, forcing 6 turnovers (including one that was directly returned for a touchdown), and knocking out West Virginia's starting quarterback, Pat White. Step back a moment, away from the emotion of the biggest win in school history, and see the Bulls for what they are. The Bulls were outgained by 163 yards, out first downed 21-13, and their star quarterback, Matt Grothe, completed only 11 of his 20 pass attempts. The Bulls are not a bad team. On the contrary, they are a very good team. However, they do not belong in any discussion of national championships. They will fall at least twice in Big East play, and the West Virginia Mountaineers will garner the league title. 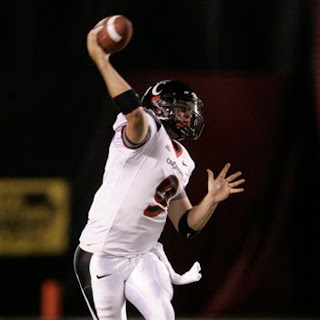 ...One of my preseason sleeper teams, the Cincinnati Bearcats, are rising high at 5-0. This week they open Big East play against Rutgers at Piscataway. How good are the Bearcats? We'll know a lot more after this weekend. Though they have been extremely dominant thus far (outscoring their first 5 opponents by almost 36 points per game), here are their second-order wins: Utah (2-3), Ball State (3-2), and Syracuse (1-4). That's it. 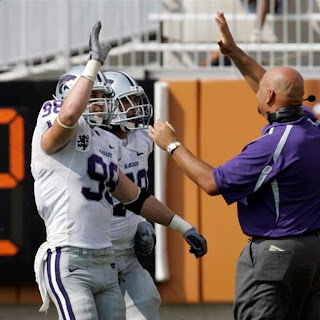 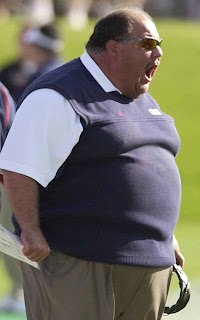 ...Speaking of Kansas, they have outscored their first 4 opponents by 191 points. However, their second-order wins are against Toledo (1-4), Northern Illinois (1-4), and Iowa State (1-4).

...Continuing their recent history of breaking Clemson's heart, the Georgia Tech Yellow Jackets knocked off the Tigers 13-3 despite Taylor Bennett pulling his best Reggie Ball impression (7 of 15 for only 67 yards). Just so you don't forget here's how the 2004 game ended.

You forgot that the Bulls turned the ball over also and WVU came out with 0 points with White in the game.WVU had some 3 and outs in the first half including the first series or 2.

The Bulls had dominated the game statistically until they had a 14-0 lead then came out in the second half and drove the ball the length of the field to go up 21-3. They then went into conservative mode. This is why we watch the game. This worked for many teams in the past. Pro Teams that come to mind are Bucs (super bowl) Ravens (same)
College teams also tend to do this when they build a lead.

Also it is not ironic that hard hitting and pressure on the QB lead to a couple of fumbles and picks. That the Bulls have been causing TO's all season long see the AU game.

Seriously, WV will come back and take the title? NOT! If there were a BE championship it was played Friday night. South Florida does have some tough games ahead (Rutgers and Cincy) but if they play like they can, they have a 13-0 season and yes I dare say a shot at the national title. Order in the BE is as follows:

Watch and see. Mark my words. Etch it in stone. Also, 4 out of the top 5 (AP poll) will lose. Which will eave the door wide open for USF. I call it like I see it.

I think we have a different definition of dominating the game. In the first half, West Virginia had 25 more yards than South Florida. I'm not saying South Florida didn't deserve to win, I'm saying that propecting forward, West Virginia is probably the better team.

Oh I see. You must mean that dominating means losing the game. I get it now. Then in that case WV is definitely better. So glad you cleared that up. Now I can sleep at night. In that case I'm putting my money on FIU. They really know how to dominate.

Anonymous, holy moly give it a rest would you?

Look, it's a free country. Different blogs offer different things. If all you want is to celebrate a hard-fought victory and dream of what will happen for your team from there, then I'm sure there are places that offer you that. If you want to read a blog that only cares about Ws and Ls and doesn't offer any statistical analysis, then again I'm sure there are blogs that can accomadate you.

But clearly Matt is offering a statistical analysis here. He is noting certain elements that generally indicate a team is 'lucky'. Being outgained by your opponent buy winning anyway is a sign that you are getting lucky. If this happens over the course of a season, and you win a bunch of close games in this manner, then most likely your record will readjust downward the next year. Call this "Phil Steele" analysis. I like it. Other people like analyzing things in this way, too. But of course you are free to peruse blogs that take a different approach...

Valid points about UK, but then apply the same with Ohio St. and justify thier rank.

If you'll reread my response, I never claimed West Virginia dominated USF. I just made the point USF did not dominate West Virginia on the first half. On the contrary, the game was pretty evenly played, yet USF led thanks one big turnover and one big secondary breakdown.

As for Ohio State, they have a better win than Kentucky (at Washington--right now that's better than Arkansas or Louisville) and actually play defense. Kentucky allows over 200 yards rushing per game and over 5 yards per attempt despite leading in their games for the majority of the time!

Well don't post your backhanded compliment on a USF board and expect us to not respond? Better yet, what's your address so I can send some flowers?

'Well don't post your backhanded compliment on a USF board and expect us to not respond?'

That's not really a question and I didn't post any such thing on a USF board. Don't take it personal guy, it's just numbers.

"However, they do not belong in any discussion of national championships."

Guess who is #2? It's kinda hard not to include them in the NC talk isn't it?

By my count the season is only halfway over, and the Bulls still have 6 conference games to go.