In Case You Missed It: Week 9

...The Kansas Jayhawks won for the first time ever in Kyle Field against Texas A&M to run their record to 8-0. After 4 conference games, they have already exceeded the school record for Big 12 wins in a season. However, when it comes to the polls, some folks haven't yet gotten the memo. When another historical afterthought ran out to a 5-0 start, the pollsters were falling all over themselves to put them in the top 10 (more on them below). Now it takes an act of congress to get the Jayhawks in the same position. Kansas is ranked 8th in both the Coaches' Poll and the AP Poll. In the both' polls, 4 teams with a loss are ranked ahead of them (LSU, Oregon, Oklahoma, and West Virginia). Certainly, I love to see teams sorted by their body of work, and not just on the number of losses they happen to have. But this reeks of nothing more than classism. Take away the blue KU from the helmets and replace it with a nice big red 'N' and this team is your current BCS poll-sitter. Let's take a minute and compare their schedule with Oklahoma (5th in both polls).

While Kansas has taken a lot of heat for their non-conference schedule, and rightfully so, Oklahoma's first 4 games, were not exactly against the giants of college football. Outside of their game against Miami, which is not the same team they were when this game was originally scheduled, the Jayhawks may have had a slightly tougher non-conference slate. In conference play though, it's not even close. Kansas has three road wins over teams in the top 50, with two against teams in the top 30. Oklahoma has one top 30 win (at home), and has lost to the second best team on their schedule (Colorado).

...Speaking of poll bias, isn't it time we punish LSU just a tad more for dropping a game to Kentucky? As I so clairvoyantly predicted a few weeks ago, Kentucky is not a top-10 or even a top-20 team. Two weeks ago that loss didn't look as bad when Kentucky only had one loss of their own. Now that they have 3 though, it's time to reevaluate. This Kentucky team is pretty much guaranteed to lose 5 games. Do you want a 1-loss LSU team playing Ohio State for the national title over an undefeated Kansas or Arizona State? If you answered 'Yes', you are either a BCS advertising exec paralyzed with fear at the thought of promoting that game, a resident of Baton Rouge, or a petty fan of either Arizona or Kansas State. Oh, what about LSU's two huge wins? Well both Auburn and Florida have a combined 4 losses to teams besides LSU. Look for that total to jump to at least 6 by season's end.

...The SEC, contrary to what most fans will have you believe, is not a collection of great teams. It is a collection of very good teams plus one national title contender (LSU), but is there any difference between the Florida/South Carolina/Georgia/Alabama/Auburn quintet and say Texas/Texas Tech/Kansas State/Colorado/Missouri? Plus, what does it say about your league, when the fifth best team in the SEC East (Tennessee) now has the inside track to get to Atlanta. More on Tennessee later in the week.

...One more SEC tidbit. I present to you, the Mississippi State Upset Formula (patent pending). 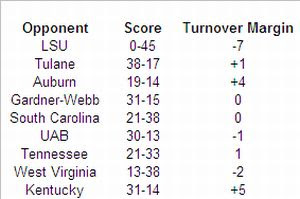 At this point in the season, most observers probably thought Mississippi State would be 3-6. However, the Bulldogs have pulled road upsets over both Auburn and Kentucky by significantly winning the turnover battle. The Bulldogs are a combined +9 in those two games and -8 over the other 7 games. Over their final 3 games, the Bulldogs host both Alabama and Ole Miss, and play Arkansas on the road. Bowl-eligibility is almost assured, and if the Bulldogs can upset either the Tide or the Hogs, a bowl bid will be a reality.

...Just so you know, Connecticut is for real. Yes they should have lost to Temple, and yes they were the beneficiary of a blown call against Louisville, but their defense is superb. Their showdown in Morgantown in 4 weeks will probably decide who gets the BCS bid from the Big East. As for South Florida, well they better come to play against a solid Cincinnati team on Saturday, or a season once so promising will be gone before you can say John L. Smith.
Posted by matt at 1:16 PM