We have finished our trek through the BCS conference, so now we turn our focus to the little guys. First up, Conference USA. To see last year's Conference USA post, click here. 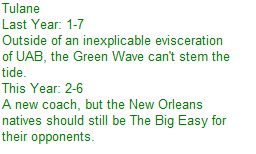 Bowl Spots and Postseason Bans
The recent news that Central Florida will be ineligible for the postseason in 2012 could mean there are not enough bowl eligible teams to fill all the available bowl spots come December. Let's do some simple math to show you what I mean. There are currently 35 bowl games, ranging from the prestigious Rose Bowl, to the less prestigious Fight Hunger Bowl. That means 70 teams need to have at least six wins (with five coming against IA teams). How did things shake out last season? There were 74 bowl eligible teams (75 had six wins if we include Eastern Michigan and their pair of wins over IAA schools). Of those 74 teams, two were ineligible for the postseason (Miami and Southern Cal). Thus there were two extra teams that were not invited to the postseason (Ball State and Western Kentucky). While there were only two teams ineligible for the postseason last year, this year there are four. Perhaps most troubling to the bowl organizers, each of the four teams (Central Florida, North Carolina, Ohio State, and Penn State) are somewhere between likely and very likely to attain the necessary six wins to qualify for the postseason. In addition, while Miami self-imposed the postseason ban last season in hopes of lessening the NCAA's eventual punishment, the possibility of the hammer dropping for the Nevin Shapiro scandal is very real. The NCAA may be forced to allow one of the four new IA teams in the process of reclassification (Massachusetts, South Alabama, Texas-San Antonio, and Texas State) to play in the postseason if they achieve the requisite six wins. Or we could see a 6-6 team with multiple wins over IAA schools allowed to play via a waiver. Finally, if those two options do not exist, we may see a 5-7 team 'rewarded' for their season with a postseason trip. Either way, keep an eye out for the number of teams that get to six wins (excluding Central Florida, North Carolina, Ohio State, Penn State, and possibly Miami), and remember, the magic number is 70.
Posted by matt at 5:31 PM