I apologize for the dearth of posts in the last week, but I was in the midst of a vacation. Now I'm back, and more importantly, there are just 10 days remaining until football season commences. To see last year's WAC preview, click here. 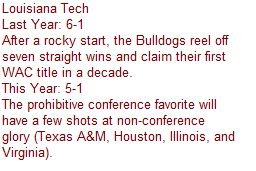 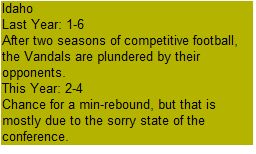 The Dregs of the WAC
With Boise State exiting stage left after the 2010 season and Fresno State, Hawaii, and Nevada following suit after 2011, the remaining teams in the WAC have not experienced a great deal of recent success. While Louisiana Tech and Utah State combined for an 11-3 league mark and a pair of close bowl losses, their performance in 2011 was more an aberration than a trend. The following table lists the five WAC teams that have been in the conference since the last major realignment in 2005 and their aggregate WAC record from 2005-2010. 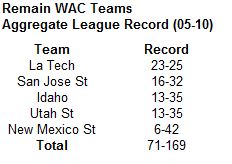 As you can see, none of the five teams posted an overall winning record in league play. In fact, only three times did one of the teams finish with a winning league mark (Louisiana Tech 2005, San Jose State 2006, and Louisiana Tech 2008). In that same span, the same number of teams finished winless in league play (New Mexico State 2005, Idaho 2007, and San Jose State 2010.)
Posted by matt at 5:53 PM