One week to go. This upcoming weekend is out last without football for the rest of the year. Rejoice! To see last year's MAC preview, click here.

Where Have the Elite MAC Teams Gone?
It was early 2004. Miami of Ohio, lead by Ben Roethlisberger (pre-NFL and pre-sexual assault edition) had just won the MAC, finished 13-1, and landed at number 10 in the AP poll. Joining them in the final poll were the Bowling Green Falcons who had won 11 games themselves and finished 23rd. In the eight seasons since, only a single MAC team, Central Michigan in 2009 (23rd), has finished in the final polls. Have the pollsters been blind to quality teams, or have the elite MAC teams simply not been as good in the last eight years? To find out, I examined each MAC season since 2003 and calculated where the MAC team with the highest SRS rating ranked nationally. The SRS, or Simple Rating System is a quick and dirty way to rate teams used by college football reference dot com. If you want a quick primer, here is the link to the definition of SRS. The table below lists the highest ranked MAC team by SRS each season since 2003 and their national rank in SRS. 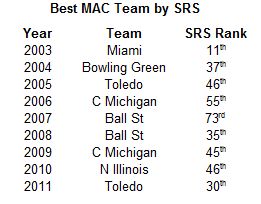 As you can see, Miami earned their top-10 ranking in 2003, finishing with an SRS ranked 11th in the nation. Otherwise, no team outside of Toledo in 2011 has been deserving of any top-25 votes. Central Michigan in 2009 was probably a little overrated when they finished ranked 23rd, with their lone win of note coming over a Michigan State team that finished 6-7. Can the MAC produce a top-25 caliber team in 2012? Probably not. The MAC in 2012 should have much parity in both divisions, but while that makes for compelling races it also makes for a lot of conference losses.
Posted by matt at 5:56 PM