The countdown is under four weeks. And after today, our BCS conference previews are concluded. We'll start with Conference USA early next week. To see last year's SEC preview, click here. 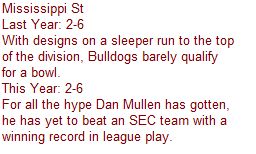 V-Bilt This City: How to Rationalize Vandy Winning the East
The preseason is the time for unbridled optimism. Fans of teams that know they are going to be good dream of winning their conference or national title. Fans of teams that think they are going to be good come up with all sorts of scenarios and permutations of their team winning the conference or national title. Even fans of teams that know they are not going to be good come up with scenarios and permutations where their team achieves bowl eligibility. Personally, I try to ground my preseason predictions in at least a little bit of reality. Thus, what follows is not a rationalization of something that I think will happen, but of something that is more likely to happen than most people believe: Vandy playing in the SEC Championship Game.
Based on a precursory internet search, Vanderbilt is roughly a 100-1 longshot to win the SEC East, meaning oddsmakers deem it a very unlikely outcome. Here are three reasons they are wrong.
1. Vanderbilt was actually a solid team last season.
Based on their scoring and yardage margins, a team with Vanderbilt's statistical profile could have expected to finish 4-4 in the SEC last season. Vandy finished 2-6. Thus, they are somewhat undervalued heading into 2012.
2. Vanderbilt plays in the SEC East.
The SEC is by far the strongest conference in the country. However, the core of that strength is concentrated in the West. Alabama and LSU are two of the best teams in the nation. Arkansas is a top-20 team, newcomer Texas A&M has been steadily progressing (record be damned), and Auburn won the national title in 2010. Even the two Mississippi schools have had varying levels of success in the recent past. In the East, the three traditional powers, Florida, Georgia, and Tennessee, have all stumbled over the past few seasons. South Carolina is a nouveau riche program, Missouri is a consistent winner, but not an elite program, and the bottom may have just fallen out of the Kentucky program.
3. Look at the schedule.
Vanderbilt has one of the more forgivable SEC schedules of recent memory. They must face the six other members of the SEC East, but from the West, they draw Ole Miss and Auburn. No Alabama. No LSU. No Arkansas. No Texas A&M. The only other East team conferred a similar advantage is Georgia. The Bulldogs also draw both Ole Miss and Auburn from the West. That's one of the reasons Georgia is projected to repeat as the SEC East champ.
I'm not saying Vanderbilt will win the East, but this is their best shot. We'll know very soon whether they are contenders as they host South Carolina on the opening Thursday of the season.
Posted by matt at 3:43 AM